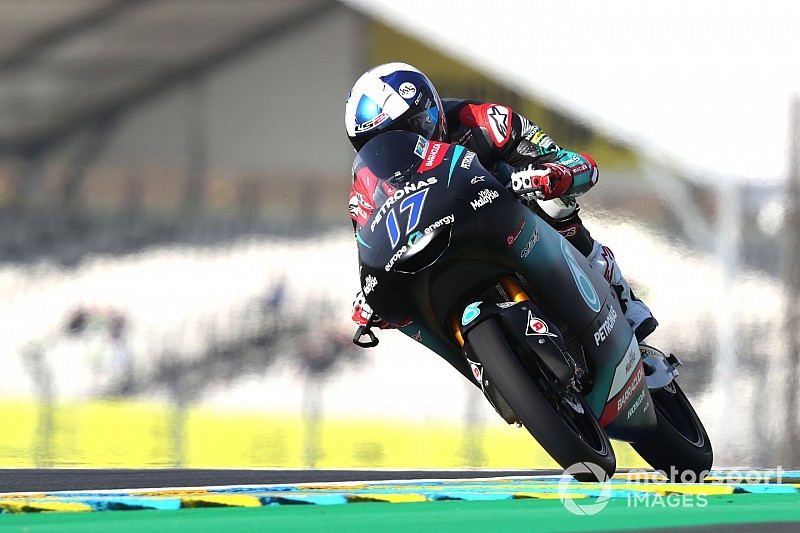 John McPhee outduelled Lorenzo Dalla Porta to take his first Moto3 win since 2016 in a hectic race at Le Mans.

McPhee had started from pole but did not lead for most of the race, instead securing the win with a decisive last-lap move on the back straight.

Tony Arbolino has passed McPhee off the line, but quickly surrendered the lead to Tatsuki Suzuki, who controlled the pace of the race over the opening laps.

Behind, Suzuki's compatriot Ai Ogura had kept third place at the start, only to highside off his bike exiting the Chemin aux Boeufs chicane.

Ogura's bike stayed upright but changed direction once it dipped into the gravel and came back onto the racing line at speed, but the rest of the pack managed to dodge the out-of-control Honda.

As a seven-bike lead group formed out front, Andrea Migno took the lead from Suzuki at the first corner of the ninth lap, only for the Japanese rider to return the favour at Turn 13.

This opened the door for Dalla Porta to have a go at Suzuki, but he was likewise re-passed just a few corners later, courtesy of an aggressive move at La Chapelle.

A few laps later, Suzuki surrendered the lead all on his own, running out wide at at the La Musee left-hander and dropping to fifth, before muscling back up the order and past McPhee for the lead within a lap.

But after he was overtaken by Dalla Porta and McPhee at the start of the following lap, Suzuki fell at the Dunlop chicane, with Arbolino collected by his fall.

The chaos allowed the chasing pack, led by Kaito Toba, to reel in the lead group, and Toba picked off the likes of Gabriel Rodrigo and Migno before overtaking Dalla Porta on the penultimate lap to slot in behind McPhee.

However, Dalla Porta then passed both McPhee and Toba into the first corner on the final tour, and held the lead until McPhee surged back past down the inside of Turn 9, the Scotsman hanging on to the win by 0.106s.

Championship leader Aron Canet, who had started 12th, extended his lead at the front of the standings by finishing third, having secured the position with an aggressive late move on Toba – who was shuffled down to sixth behind Rodrigo and Migno.

Celestino Vietti was the top rookie in seventh, ahead of Kazuki Masaki, who recorded his best-ever Moto3 finish, while Jakub Kornfeil and Raul Fernandez completed the top 10.

Championship frontrunner Jaume Masia finished eighth on the road, but had incurred a 2.2-second penalty for cutting the Dunlop chicane, which relegated him to 12th in the end.

Niccolo Antonelli, who won last time out at Jerez, was among the 12 retirements after hitting the deck at Turn 8.