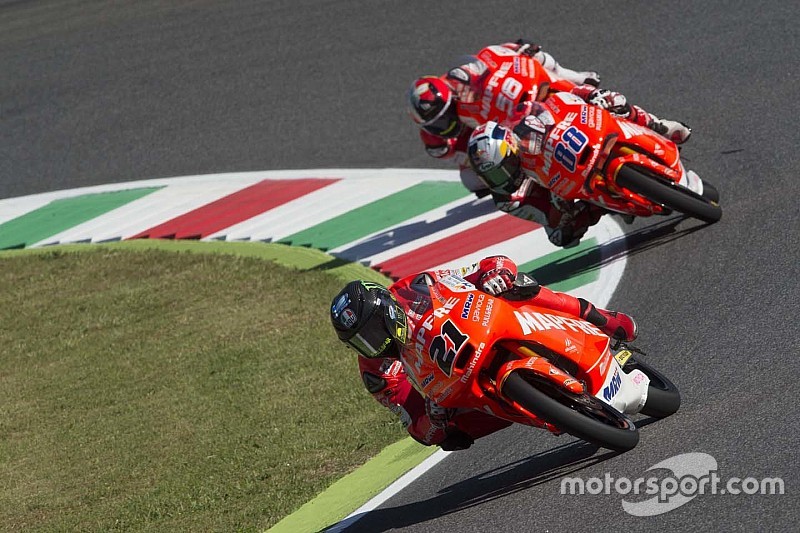 Indian constructor Mahindra finished third in the 2015 Moto3 standings behind Honda and KTM after the conclusion of the season last weekend at Valencia.

Mahindra became a full-scale independent constructor in 2015, supporting four customer teams in the championship, including the former-title winning Aspar squad.

In the previous seasons since 2011, Mahindra competed as a team but decided to switch roles this year to expand their reach in the two-wheeled category.

In terms of championship points, it wasn't the best year for the Indian constructor, as Mahindra finished with 120 points to Honda's 411 and KTM's 341.

The young Italian was the highest placed Mahindra rider in the standings, finishing 14th with 76 points. The next best was his rookie teammate Jorge Martin, who finished 17th with 45 points, and Juanfran Guevara, who wound up 24th with 15 points.

Reflecting on the season, Mahindra Racing's CEO Mufaddal Choonia rued their "terrible luck" and stated that lessons have been learnt in the hope to make 2016 a milestone year.

Elaborating more on next season, Choonia said: "We are making improvements on almost all areas of performance of the bike and more particularly on the engine side.

"We know where our package is strong and where it is weaker compared to the competition. Fortunately, we have made strides every year and the gap between us and the competitors has been narrowing every season.

"I hope we are able to completely bridge this gap in 2016 and give all our riders a package capable of winning races."

Adding to the progress apart from the bikes, Choonia touched upon significant investments to their racing development center in Italy which includes both in the manpower and the equipment department.

"Some very good talent will be joining us over the next month or two and this will help strengthen the Mahindra Racing development team significantly," he said.

"We have also made a lot of improvements to the 2016 Mahindra MGP3O racer and the new bike will be significantly different from the motorcycle we have at the moment in almost all areas."

For next season, Mahindra will continue providing bikes to Aspar, who have retained Bagnaia and Martin, along with Worldwiderace, who will have Binder and Ajo KTM rider Karel Hanika. Team Italia will field Manzi and Stefano Valtulini, while CIP will have Suzuki and Martin Vanhaeren.

In addition to these teams, Mahindra will also provide their bikes to Saxoprint Racing Team Germany, who will run with debutant Peugeot Motorcycles with Alexis Masbou and John McPhee as their two riders.