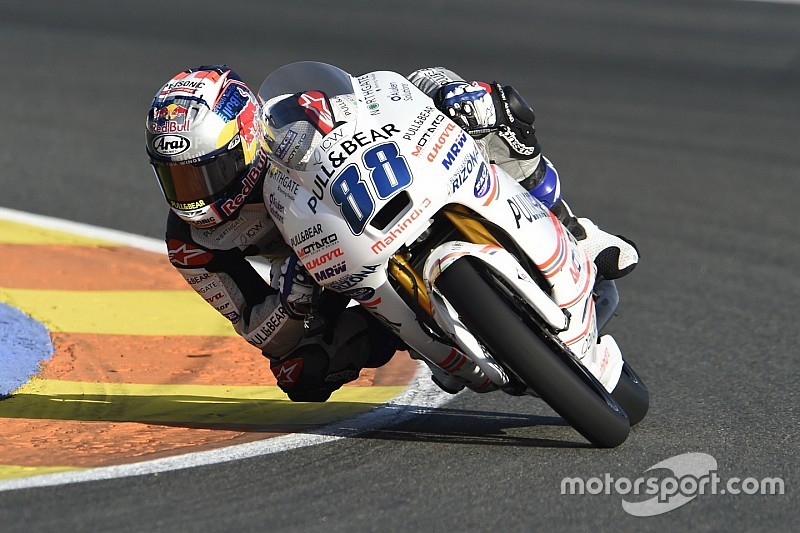 Aspar Mahindra's Jorge Martin says he is comfortable with his race pace in Valencia Moto3 even though the whole field is bunched up very close to each other.

The top 26 riders are only separated by 0.975s after the qualifying on Saturday with Martin 15th, just 0.074s ahead of his teammate Francesco Bagnaia.

The Spanish rider clocked in the exact time of 1m39.662s which 14th placed Gabriel Rodrigo did on his RBA Racing Team's KTM machinery.

"Today was a really difficult session. It is hard when it is like this because you have given everything but there are so many riders setting similar times," he said.

"We need to keep improving in the last sector as I think I am losing some time there. But overall I am very happy with my pace for the race.

"I will try to get a good start, fight with the group and try to make the podium. It will be difficult but it is feasible because my pace is very strong," he added.

Bagnaia, on the other hand, was left disappointed with 16th and will have a battle in his hands with his nearest challenger Jorge Navarro in the standings, who starts behind him in 17th.

"We are working a lot because we still haven't found the perfect set-up, we're struggling a little with the chassis," the VR46 academy rider said.

"We also have some problems with grip and I couldn't complete a single lap without risking a crash.

"It is a shame because I could have done better today and was on course to improve my best lap on two or three occasions but it wasn't to be," the Italian added.

The Spanish rider finished 21st despite having crashed on his out lap at the start of the session. He was a mere 0.014s ahead of CIP's Tatsuki Suzuki.

Meanwhile, Albert Arenas was the last rider to finish under a second of polesitter Aron Canet's time in 26th abode his Peugeot Mahindra machinery.

Behind, Platinum Bay's Darryn Binder was 29th, while another debutant Enzo Boulom in the CIP led the rest of the Indian manufacturer riders.

Valencia Moto3: Binder comes back from 22nd to win finale