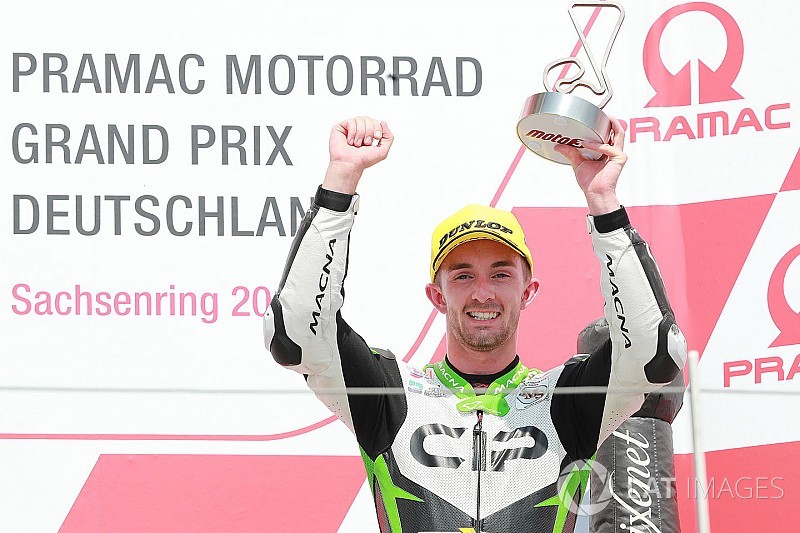 Moto3 racer John McPhee says he's considering a step up to Moto2 for the 2019 season - but could also elect to remain in the lightweight class.

McPhee, 24, has been a full-time fixture of grand prix racing's third tier since 2013, and switched to the CIP KTM squad for 2018 after a season at the Dorna-backed British Talent Team last year.

He scored his first podium finish of the year at the Sachsenring, marking his first top-three in more than a year, as he finished behind title protagonists Jorge Martin and Marco Bezzecchi.

With the rider market in Moto2 and Moto3 starting to heat up, McPhee admitted the timing of his podium was fortuitous and says he has offers to move up to the intermediate class in 2019.

"For me, my future is unclear at the minute," said McPhee. "All I can say is that it is looking promising, we have offers but nothing fully secure, nothing fixed at the minute.

"But yeah, there are a couple of options there that I am really happy about, so hopefully after the summer break or after the next few races I will know more and I will be able to say something.

"Moto2 was my main focus until the first few races of last year didn't quite go to plan. Now I'm looking at [staying in] Moto3 as well, the KTM is working really well for me and it is starting to come good, so there is no reason why I wouldn't want to continue there.

"I'm looking at both sides in the minute, but everything is happening so fast. There are less and less seats [still available], but I think the offers we have at the moment are all strong, so I'm feeling positive."

McPhee's third place in Germany marked his second top-four finish in three races, elevating him to 14th place in the current standings.

The Scot says the result comes as a timely boost as he looks to make up further ground in the championship during the second half of the year.

"Nobody likes to settle for a position, that is a racer's mentality, but it has been a full calendar year not being on the podium and coming very close now on quite a few occasions," he said.

"I think the way the championship is looking and the way the year has been going, a podium was important to carry on for the rest of the year."

Martin ruled out of Brno after practice crash