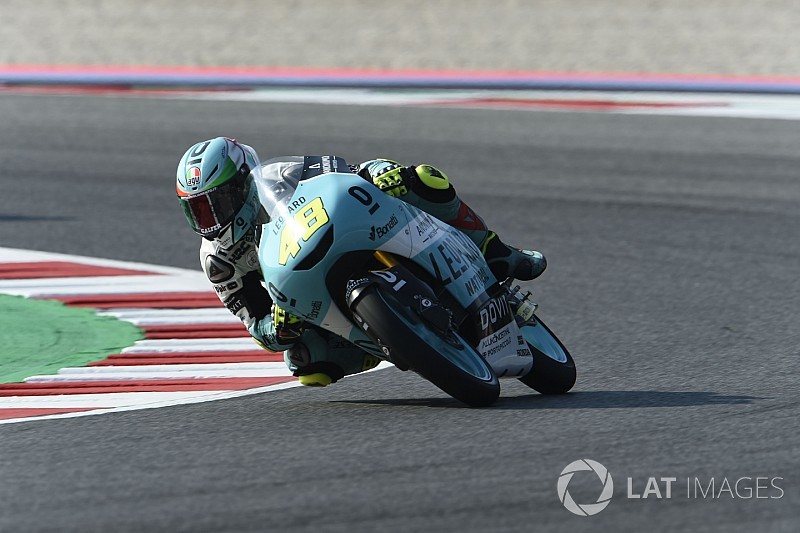 The race was decided within a five-man lead group, which was formed when five other riders just behind them were wiped out in a crash at the final turn.

The incident was caused by Jaume Masia losing control of his bike on the kerbs, highsiding and collecting Aron Canet, Enea Bastianini, Niccolo Bulega and Ayumu Sasaki.

Canet, who was hit by Bulega's bike, and Sasaki were both taken to the medical centre, the latter having an x-ray for his left wrist.

In the following few laps Bezzecchi and Dalla Porta traded the lead on a few occasions with Gresini duo Jorge Martin and Fabio Di Giannantonio as well as Gabriel Rodrigo following closely.

But when Bezzecchi ran wide at Turn 8 and not only dropped behind Dalla Porta but Di Giannantonio as well, the two-way fight became a five-way one, the order constantly changing for the last 10 laps.

Bezzecchi was able to hold on to the lead for a few consecutive laps again, but the Prustel GP rider's race ended abruptly in a highside crash with just two laps remaining.

Martin made contact with Bezzecchi's bike and while he managed to continue, he lost enough momentum to drop behind Dalla Porta and Di Giannantonio as the final lap began.

Dalla Porta led throughout the whole lap before Di Giannantonio made his move on the final corner.

However his corner exit was compromised and Dalla Porta came back to win, with Martin also passing his teammate for second and coming within 0.058s of victory.

As a result of Bezzecchi's crash, Martin reclaimed the championship lead with a gap of eight points.

Rodrigo, after a couple of near crashes, settled for fourth with Jakub Kornfeil being best of the rest in fifth, 5.7s adrift.

The top 10 was completed by Darryn Binder, and Italian duo Andrea Migno and Niccolo Antonelli.

Tatsuki Suzuki, John McPhee and Alonso Lopez also crashed out, while Philipp Oettl was forced to miss the race as he was declared unfit after a qualifying crash.