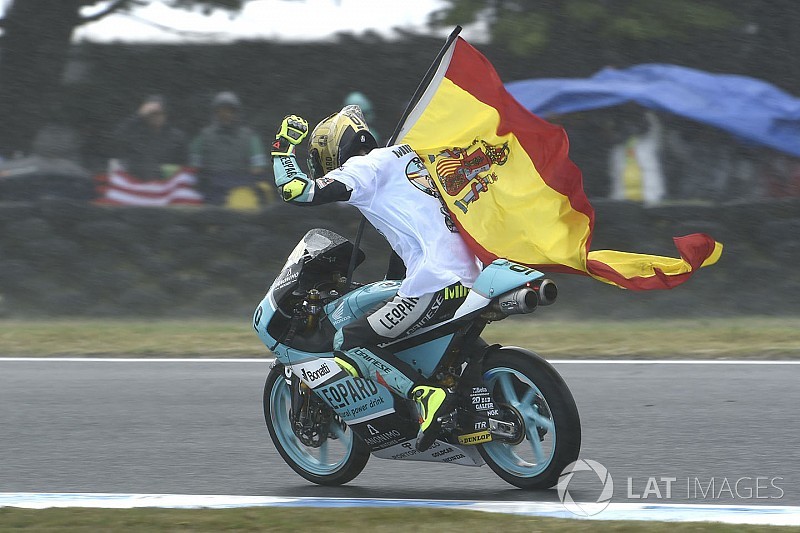 Leading MotoGP riders have praised newly-crowned Moto3 champion Joan Mir, and have predicted a big future for the 20-year-old.

Leopard Honda rider Mir secured the Moto3 title with two races to go at Phillip Island, the Spaniard collecting his ninth win in 16 races - making him statistically the most successful rider in the category's brief history.

The last rider to win more than nine races in the lightweight class was Valentino Rossi, who racked up 11 wins in 1997 on his way to that year's 125cc title.

Asked what he made of Mir's season, the Italian veteran said: "He is young and this year he has been scary on the track. Joan is a very fast rider, I love his character, he is very calm and serious."

Marc Marquez likewise commended Mir's smartness and consistency during this year's races, many of which were tactical slipstreaming battles with as many as 10 or 12 bikes in the lead group.

"Only time will tell if Joan is as good as he looks, but right now he shows a lot of potential," said the MotoGP points leader.

"Moto3 is a difficult category and he passed it with flying colours. He is the smartest rider of the field.

"He is the only one who has finished all the races, showing that in addition to being very fast, he also thinks a lot on the bike."

Mir will step up to Moto2 next season with the Marc VDS outfit, which currently runs points leader Franco Morbidelli and Alex Marquez on its pair of Kalex bikes.

Rossi believes the young Spaniard will also excel in the intermediate class.

"I think he will be competitive from the beginning," he said. "Next year he will be in Moto2 with Marc VDS, the best team available."

Mir himself reckons the larger Moto2 bike could suit him even better than Moto3, owing to his relatively tall stature (175cm) compared to his rivals.

"One thing that is true is that I enjoy more with the bigger bikes," he commented. "I train also with a 600[cc bike] and I have more fun, because of my weight and height.

"I hope to do a great season next year, but for now I have to party a little bit and enjoy!"

British Talent Team won't be on Moto3 grid in 2018