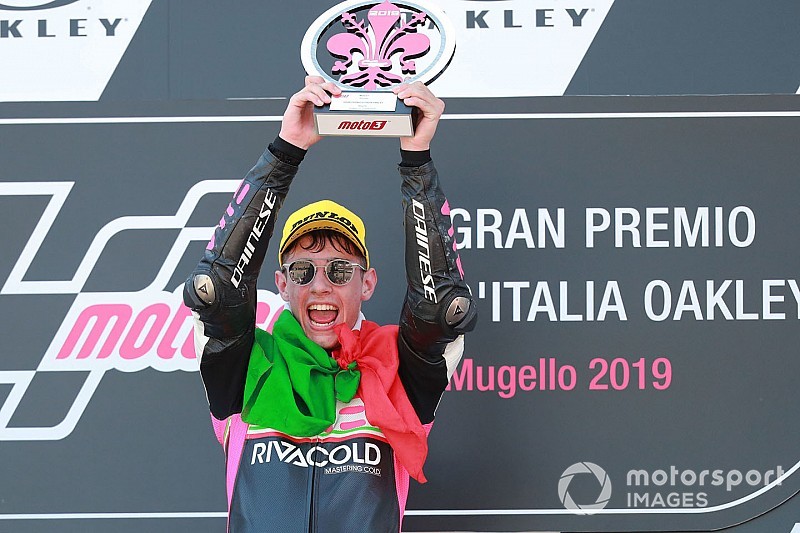 Tony Arbolino scored his maiden grand prix victory on home soil at Mugello after drafting past Lorenzo Dalla Porta on the run to the finish line at the end of a pulsating Moto3 race.

Snipers Honda rider Arbolino was third exiting the final corner, but managed to slipstream his way by both Jaume Masia's Bester Capital KTM and Dalla Porta's Leopard Honda to sneak the win by 0.029 seconds.

The top five riders were covered by just 0.257s at the line, although it was Dalla Porta that commanded the race for much of its 20-lap distance.

He had opened up an advantage of 0.6s - no mean feat with the dramatic slipstream effect at Mugello - at the end of lap seven after grabbing the lead off Arbolino at the start of lap four.

But poleman Arbolino was able to drag himself back into contention and repassed Dalla Porta to lead on lap nine, and the lead pack remained tightly bunched until the finish.

Dalla Porta even recovered from running wide on lap 11, passing five riders at the last corner Bucine to thrust himself right back into the frame for a first win of 2019.

He then traded the lead with Arbolino as well as the two SIC58 Hondas of Tatsuki Suzuki and Niccolo Antonelli, and looked well-placed to come out on top until he was nudged wide by Masia at San Donato at the start of the final lap.

Again, Dalla Porta regrouped, retaking the lead several corners later, but he didn't have enough of a margin exiting Bucine and found himself outdragged to the finish line by Arbolino.

Behind third-placed man Masia, Antonelli took fourth, while Dennis Foggia recorded his best finish of the season so far with fifth for Sky Racing VR46 KTM.

Romano Fenati (Snipers) also got caught up in a late crash with Andrea Migno (Nieto KTM).

Canet continues to hold a slender lead in the riders' standings, with Dalla Porta closing to just three points in second and Antonelli only a further 10 back in third.