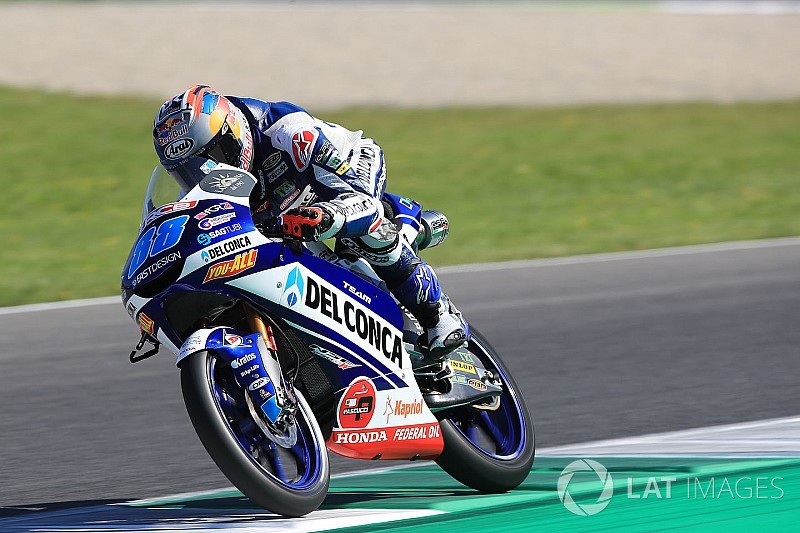 Jorge Martin scored his third Moto3 win of the season after coming out on top in a thrilling three-way scrap at Mugello over Marco Bezzecchi and Fabio Di Giannantonio.

Gresini Honda pair Martin and Di Giannantonio and pre-race points leader Bezzecchi aboard the Prustel KTM broke away from the rest of the chasing pack early on, with a two-second buffer separating them from fourth place after just three laps.

A pattern quickly emerged, with Martin leading for the bulk of the running thanks to his prowess under braking at the first corner, San Donato - only to lose out at the end of the lap as his rivals were able to slipstream their way past coming out of Bucine and along the main straight.

Martin also had to contend with a piece of gravel punching a hole in his windscreen and a near miss with a hare that ran across the circuit.

The battle intensified as the final laps, as Martin and Di Giannantonio began to swap the lead more frequently, although Bezzecchi was able to briefly split the Gresini bikes at the start of the penultimate lap before Di Giannantonio forced his way back through at Casanova.

Bezzecchi remained close enough to draft into the lead at the start of the final lap, only to run wide at San Donato, setting up a two-way fight between Martin and Di Giannantonio.

Despite looking vulnerable at points on the last tour, Martin held on to win by just 0.019s after getting a strong exit out of Bucine, as Bezzecchi pipped Di Giannantonio for the runner-up spot by 0.024s.

A full 10 seconds back from the lead trio, a group of four riders broke away from what had been a 17-bike battle for fourth place at mid-distance.

Aron Canet, third in the standings and only seven points behind Bezzecchi heading to Mugello, ran as high as fourth early on but finished a lowly 11th after being swallowed up by his pursuers.

Bezzecchi continues to lead the championship by three points over Martin, with Di Giannantonio eight back in third. Canet now trails by 22 points.