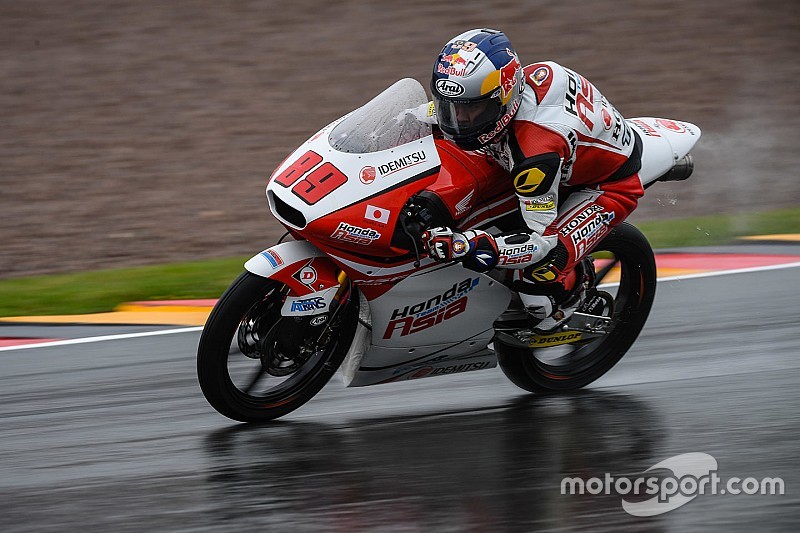 Khairul Idham Pawi dominated a wet Moto3 race at the Sachsenring, coming from 20th on the grid to cruise to an untroubled second victory of his Grand Prix career in torrential conditions.

The Malaysian, who also took a straightforward win in similar weather in Argentina, was unstoppable once he hit the front of the pack on the fourth lap.

Pawi brought along his Honda Asia teammate Hiroki Ono with him initially, as the pair established a one-two at the head of the field ahead of John McPhee, Andrea Locatelli and poleman Enea Bastianini.

But Ono dropped to fifth when he had a huge moment that he did brilliantly to save, the Japanese going wide into the gravel but staying mounted on his bike and rejoining safely - although he crashed out for good some laps later.

That gave Pawi a four-second advantage over Locatelli, who had picked off McPhee for second, which he had stretched to 12 by the time the leader suffered a small scare at Turn 1, running wide into the gravel.

The incident barely put a dent in Pawi's lead though, as he went on to cruise to his second win in the first nine races of his Moto3 career by a margin of 11 seconds.

Locatelli was able to break away from his pursuers to score his first ever Grand Prix podium in second, two seconds clear of Bastianini, who passed McPhee and pulled away to seal his second top-three finish in three races.

McPhee was then demoted a further two places by Jakub Kornfeil and rookie Fabio di Giannantonio, the latter beating the Scottish rider to the line by 0.078s.

Seventh went to Jorge Navarro, back from injury after sitting out Assen, the Spaniard cutting Brad Binder's points advantage by one as the South African finished just behind in eighth.

Binder's Red Bull Ajo KTM teammate Bo Bendsneyder starred in the early stages, dicing with Bastianini for the lead prior to Pawi's arrival at the front, but couldn't maintain his pace, the Dutchman slipping to 12th.

Crashes for Andrea Migno and Niccolo Bulega rounded off a low-key day for the Sky Racing VR46 team.