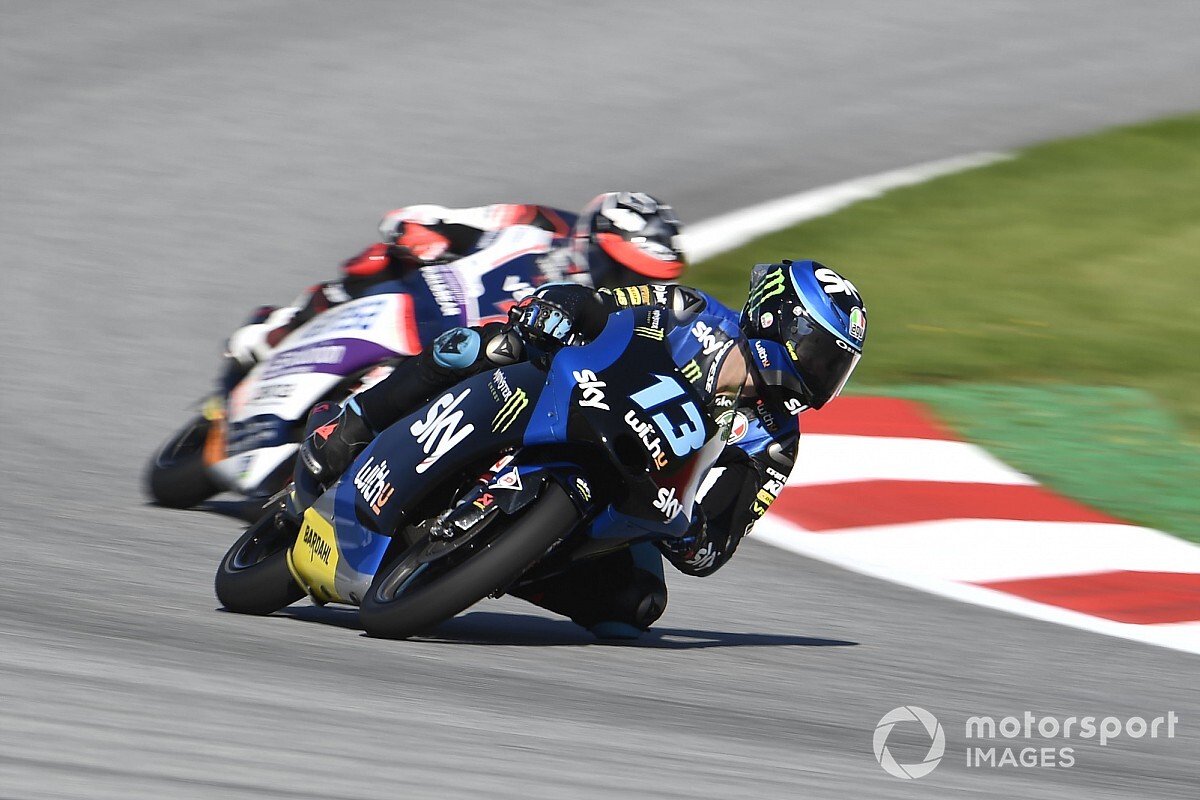 Poleman Gabriel Rodrigo grabbed the holeshot, but was powerless to stop Snipers rider Arbolino from rocketing past on the run up the hill to Turn 3.

Arbolino used the supreme power of his Honda machine to keep his lead for the first eight laps, before Rodrigo carved past at Turn 3 on the brakes on lap nine.

But once again, the power of Rodrigo’s Gresini Honda was no match for Arbolino’s, and the Italian eased back through down the hill into Turn 4.

This theme continued for much of the race, with Petronas Sprinta’s John McPhee, Darryn Binder on the CIP machine and VR46’s Vietti briefly taking stints at the front – but all were blasted away by Arbolino almost instantly.

Arbolino was roughed up by Vietti and Honda Team Asia’s Ai Ogura at Turn 9 on lap 21, with Arbolino dropping to third as a result.

The Snipers rider rallied to get back on terms with Vietti for the final lap, the VR46 machine just fending off Arbolino.

A small mistake for Arbolino at the final corner denied him any chance of using the power of his Honda to deny Vietti on the run to the line, with the VR46 rider taking the chequered flag 0.410 seconds clear.

Ogura held onto third to complete the podium and strengthen his championship challenge, with points leader Albert Arenas’ (Aspar) advantage cut to 25 by the Japanese rider after crossing the line fifth.

Rodrigo was unable to convert his pole to a podium and was fourth in the end, with Binder sixth on his CIP machine ahead of SIC58’s Tatsuki Suzuki.

Raul Fernandez was eighth on the Ajo KTM following several off-track excursions at Turn 1, with Stefano Nepa on the sister Aspar bike and EG 0,0 Honda’s Sergio Garcia rounding out the top 10.

Brno winner Dennis Foggia was 11th on the Leopard bike ahead of Snipers’ Filip Salac and the second Leopard machine of Jaume Masia, who came from 18th after being thrown out of Q2 for riding a damaged bike back to pitlane in Q1 on Saturday and spilling oil on track.

McPhee’s championship hopes took a knock with a crash out of podium contention at Turn 9 at the end of the penultimate lap, with the Scotsman now 39 points adrift of Arenas in third.

Tech 3 rider Deniz Oncu had to be taken to the medical centre after colliding with his teammate Ayumu Sasaki at Turn 1 on lap 19 while both were battling for the podium.