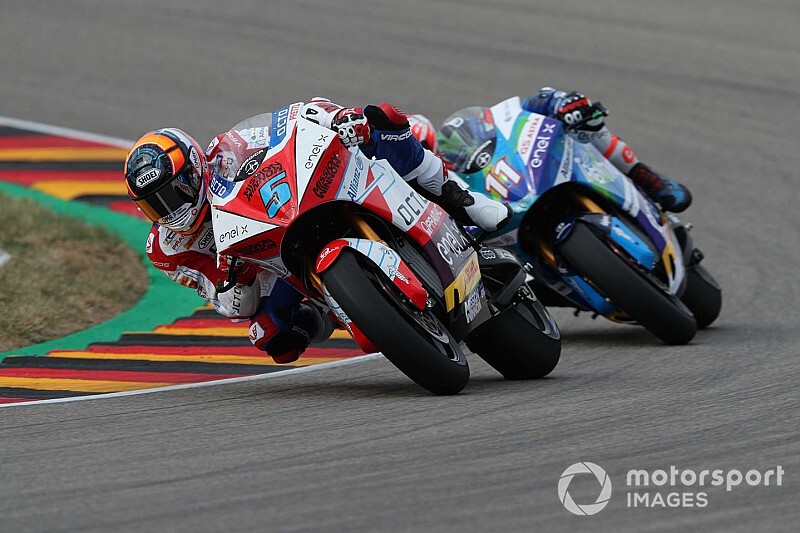 MotoGP podium finishers Bradley Smith and Alex de Angelis are poised to return to MotoE for a second season, with both included on the series' 2020 entry list.

Smith, who finished runner-up to Matteo Ferrari in the inaugural MotoE campaign, has previously expressed a desire to continue in the all-electric series, but stressed this was contingent on his other programmes.

The Briton was interested in replacing Johann Zarco in KTM's MotoGP roster, but remains on an Aprilia test rider deal following KTM's decision to promote Brad Binder instead - and can thus commit to another MotoE assault with the Sepang Racing Team-run One Energy Racing.

De Angelis, seventh in 2019, will continue with Pramac alongside fellow returnee Josh Hook.

Also retaining an unchanged line-up is Aspar, which will continue to field Maria Herrera and Nico Terol, and the single-bike teams of Ajo, Marc VDS and SIC 58, who will carry on with Niki Tuuli, ex-MotoGP rider Mike Di Meglio and Mattia Casadei respectively.

Series champion Ferrari will have a new squadmate at Gresini, with 20-year-old Italian Alessandro Zaccone, a frontrunner in CEV Moto2, replacing Lorenzo Savadori.

Savadori will spend the 2020 season in World Superbikes, having signed for Pedercini Kawasaki.

Moto2 regular Xavier Cardelus will take the ride vacated by Simeon, with race winner Eric Granado remaining on the other side of the Avintia garage.

Intact GP's 2019 rider Jesko Raffin, who will be competing in Moto2 next year, has been replaced in its MotoE roster by Dominique Aegerter, a stalwart of grand prix racing's intermediate class.

Tech 3 will have an all-new line-up of Lukas Tulovic, also from Moto2, and CEV Moto2's Tommaso Marcon.

Finally, World Superbike race winner Jordi Torres will make his debut with Pons, having been drafted in in place of Sete Gibernau.

The MotoE season will again consist of six races, beginning in Jerez in May and ending with a double-header in Valencia, which recently replaced Le Mans on the schedule.