Finnish rider Niki Tuuli became the first-ever pole-sitter in MotoE history, dominating the qualifying session for the inaugural race at the Sachsenring. 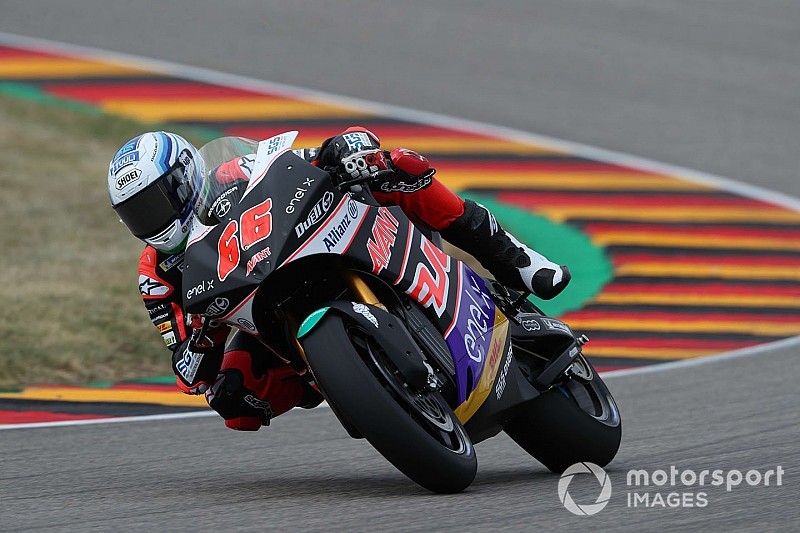 Sometime Moto2 racer and Supersport race winner Tuuli was the penultimate rider out on track in the E-Pole session, run in reverse order taken from the combined classification from Friday's two practice sessions.

The Ajo rider found over a second compared to his Friday pace, and shot to the top of the leaderboards by 0.787 seconds as he crossed the start-finish line.

Tech 3 rider Hector Garzo and Avintia's Eric Granado, the winner of the pre-season race simulation in Valencia, will make up the front row alongside Tuuli.

Garzo edged Granado by 0.011s despite having trailed the Brazilian by a quarter of a second at the halfway point of the lap.

Marc VDS rider Mike Di Meglio had topped Friday practice, but was only fourth in qualifying despite improving his laptime, while fellow ex-MotoGP rider Xavier Simeon completed the top five for his former premier-class team Avintia.

Ninth in the running order, Matteo Ferrari was 1.1 seconds in the clear after his attempt, but will ultimately line up sixth on the grid for Gresini.

Two-time MotoGP championship runner-up Sete Gibernau will line up 13th on the grid, having ended up three seconds off the pace on his Pons-run Energica Ego Corsa bike.

The grid's sole female rider Maria Herrera, who was first in the running order, headed out on track for her run before the pitlane light turned green and was thus black-flagged from qualifying.

The same penalty was then levied against Intact rider Jesko Raffin, who had missed his designated window to get out for his out-lap.