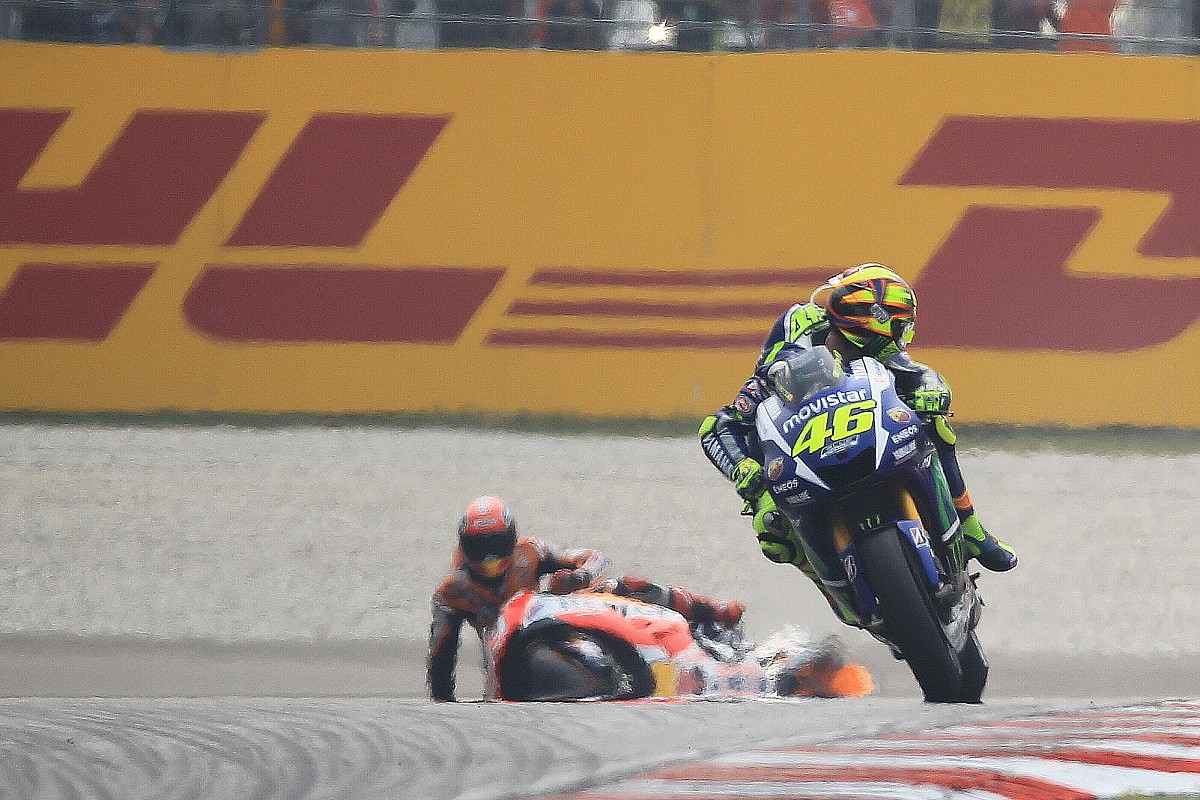 Controversies are common in every sport - and MotoGP has been no exception. Here are 10 most controversial races since the birth of the MotoGP class in 2002. 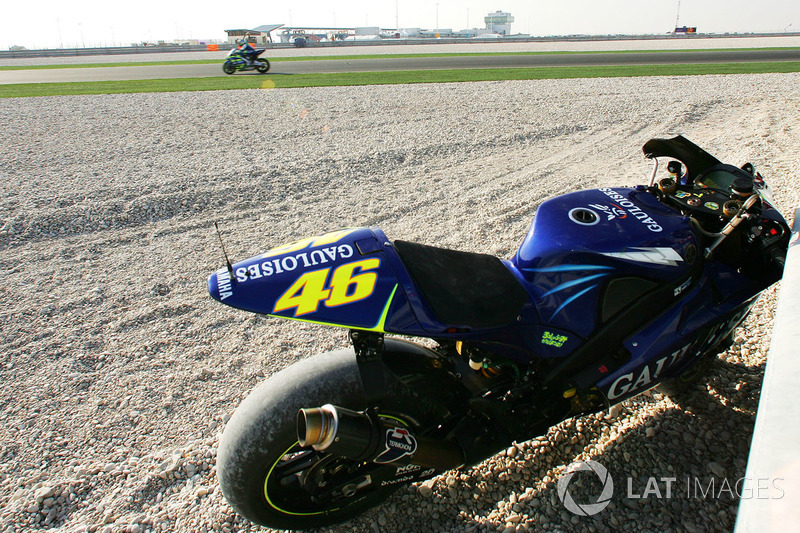 There was drama even before the start of the inaugural MotoGP race in Qatar when Valentino Rossi and Max Biaggi were sent to the back of the grid after their respective teams were caught cleaning their grid slots the previous night. The penalty came as a major setback for Rossi, who eventually crashed out, allowing race winner Sete Gibernau to take what would turn out to be last victory - as an irate Rossi infamously vowed that Gibernau would never again win in MotoGP afterwards. 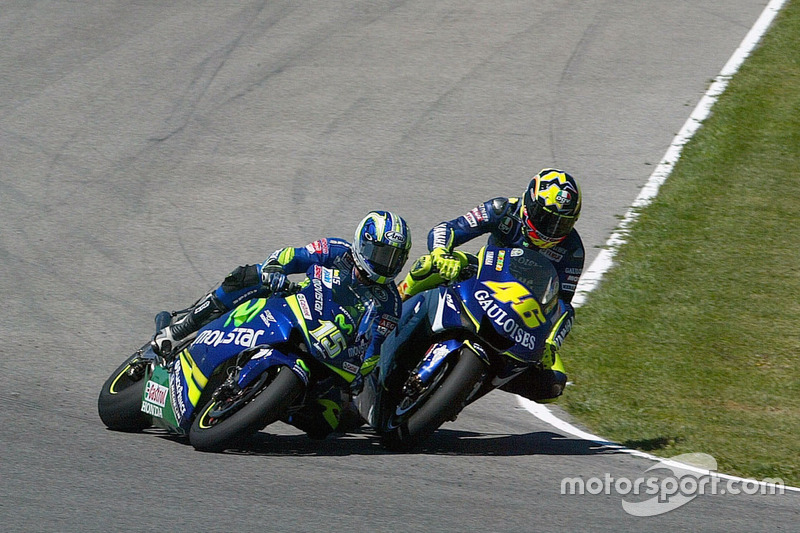 The 2005 Spanish GP featured arguably the most controversial battle between arch-rivals Rossi and Gibernau. Gibernau had started the last lap of the race in the lead, but the two riders collided after Rossi made a lunge at the final corner. While the Yamaha rider went on to take victory, Gibernau was pushed off into the gravel and limped home in second. 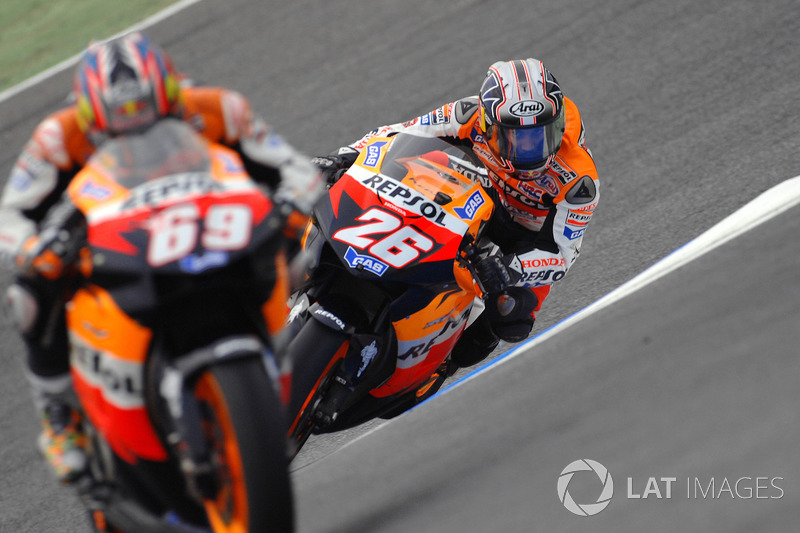 In the penultimate round of the 2006 MotoGP season at Estoril, Nicky Hayden was spectacularly taken out by his Honda teammate Dani Pedrosa on lap 5 of 28. The incident cost Hayden the championship lead and the American rider was fortunate to go on and salvage his maiden title at the following race in Valencia. 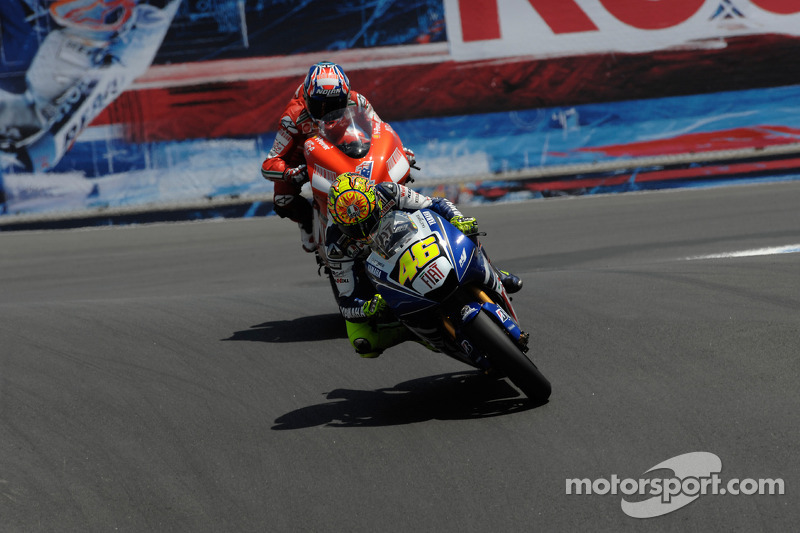 Casey Stoner arrived in the USA on the back of three victories in a row, and his pace in practice had suggested that he was going to extend that winning streak even further. However, Rossi managed to pull off a controversial pass on Stoner at Corkscrew - going beyond the kerbing to complete the move. Stoner eventually retired from the race, but that overtake served to create lasting tension between the pair. 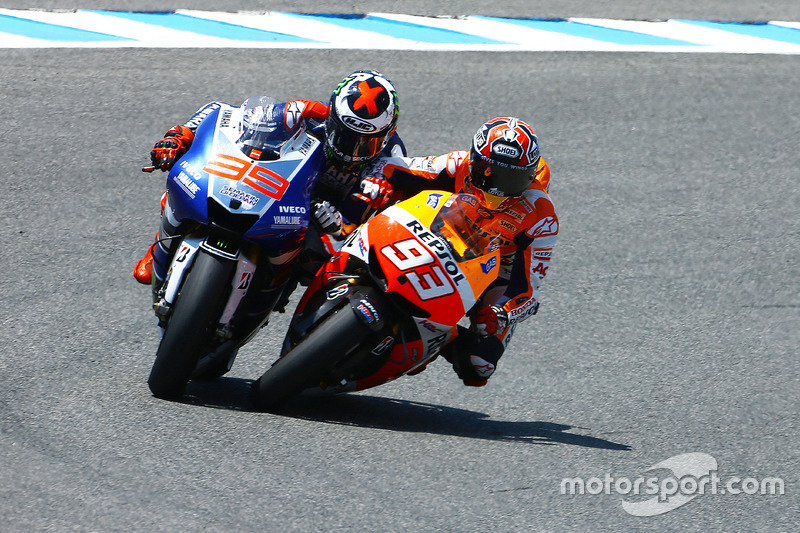 Marc Marquez showed first signs of his ruthless nature on the final lap of the 2013 Spanish GP as he battled with Jorge Lorenzo for second place. Under braking for the final corner, Marquez launched his Honda inside the Yamaha of Lorenzo, unsettling the Spanish rider and forcing him off the track. Marquez himself managed to escape the incident unscathed to finish second behind teammate Pedrosa. 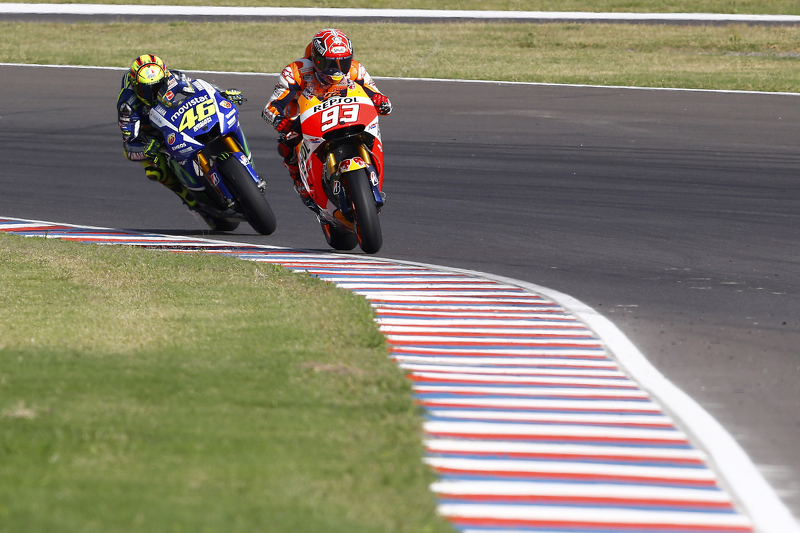 The Rossi-Marquez feud arguably began in Argentina in 2015 when Marquez made a futile attempt at repassing Rossi in the closing stages of the race, only to clip the rear of the Yamaha and fall off his own bike. Marquez tried to return to the race, but the damage to his Honda was too significant to continue, giving Rossi a clear run to victory. 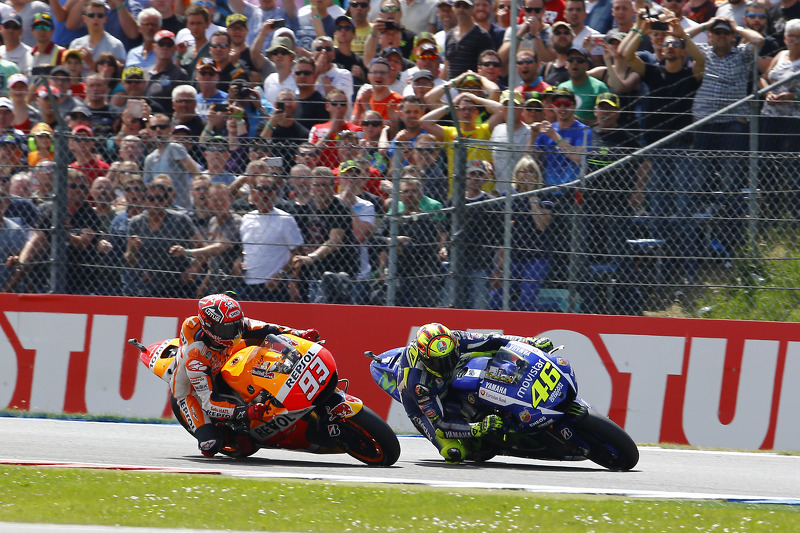 The 2015 Dutch TT featured another titanic scrap between Rossi and Marquez that was decided on the final lap. Marquez tried to pass Rossi heading into the final chicane, but the two made contact, forcing Rossi wide off the track. But the Italian rider managed to run straight across the gravel and rejoin the circuit to take a controversial win. 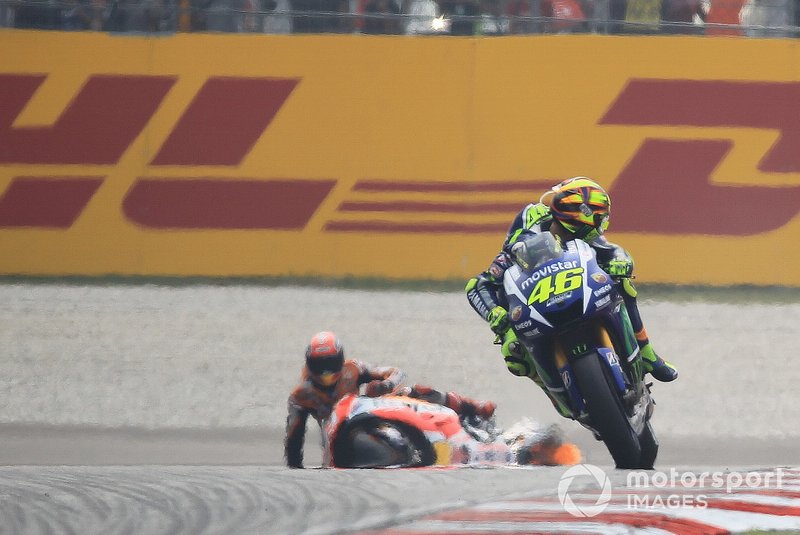 Rossi was accused of deliberately running wide during the 2015 Malaysian GP and causing the now-infamous 'Sepang clash' that left Marquez on the ground. The stewards held the Italian responsible for the incident and handed him three penalty points, which meant he started the title decider at Valencia from the back of the grid - a decision that proved crucial in Rossi losing the championship to Lorenzo. 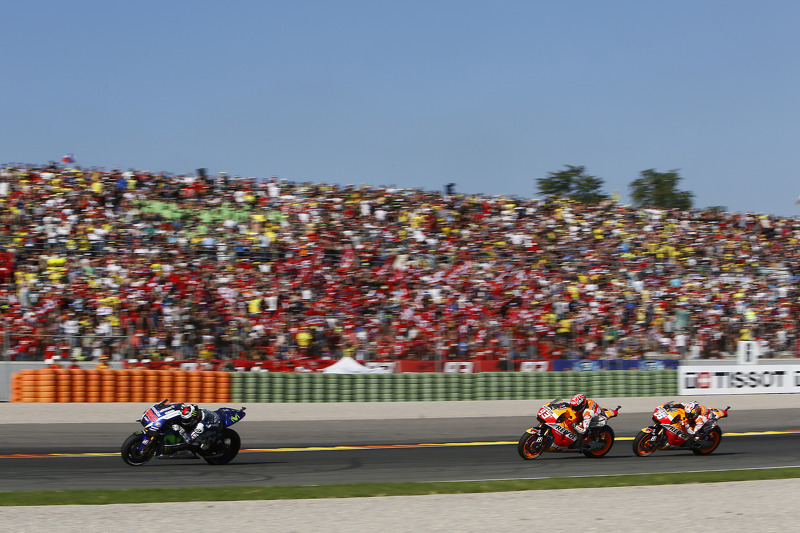 The 2015 championship finale featured no major crashes between the leading riders, but after the race Rossi accused Marquez of acting as a rear gunner for eventual race winner Lorenzo. Rossi was of the opinion that Marquez didn’t pass Lorenzo even when he had the pace to, hence ensuring that the Yamaha rider finished inside the top two - the result he needed to claim his third title. 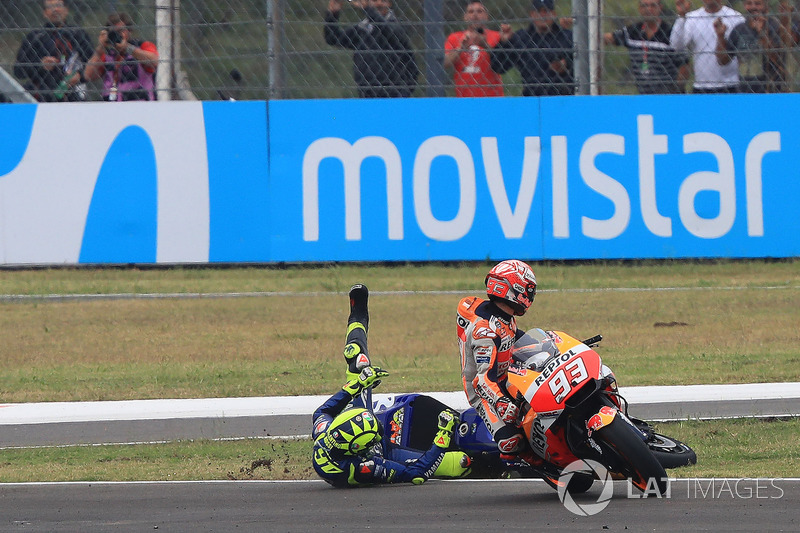 Enraged by a ride-through penalty for bump-starting his stalled bike on the grid, Marquez was rapidly making his way back through the pack when he made an ill-judged pass on Rossi at Turn 13, leaving Rossi on the ground. The incident reopened old wounds between the pair, and Rossi later lashed out at Marquez, accusing his Spanish rival of “destroying the sport.”