The 2021 MotoGP season will begin with back-to-back races in Qatar followed by the Portuguese Grand Prix in April as part of COVID-19-enforced changes to the calendar. 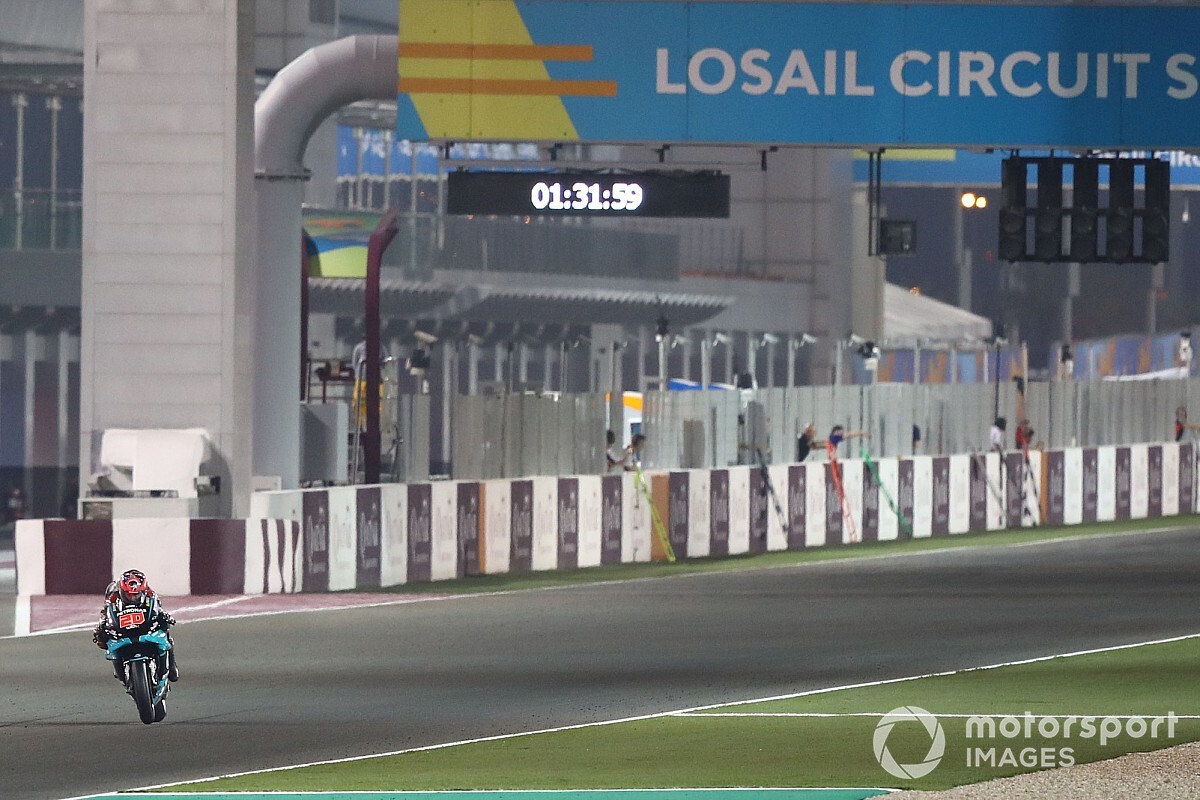 MotoGP issued a provisional 20-race calendar for 2021 late last year, though delays and postponements were expected as the COVID-19 situation worsened across the world over the winter.

Earlier this month MotoGP announced it had to cancel the Sepang pre-season test set for February after a state of emergency was declared in Malaysia due to the virus.

A meeting between teams and MotoGP was held last week, with date changes for the start of the season discussed.

Once such proposal was to bring the Qatar GP forward to the 21 March date to bring it closer to the end of pre-season testing and avoid clashing with Formula 1’s Bahrain Grand Prix on the same 28 March date.

However, MotoGP has announced the season will still get underway as planned on 28 March with the Qatar GP, followed by the Doha GP at the same Losail International Circuit on 4 April.

The Portuguese GP will then follow on 18 April, before the currently scheduled run of races that was originally meant to begin the European season on 2 May with the Spanish GP at Jerez gets under way.

Due to the COVID-19 pandemic, the US and Argentine GPs have been postponed from their April slots to the last quarter of the year – but currently have no new provisional dates.

No other date changes have been announced at this time, though the vacant TBD slot in August vacated by the axed Czech GP no longer appears on the calendar and Russia’s Igora Drive is not listed as a reserve circuit anymore.

A statement from MotoGP read: “The FIM, IRTA (teams’ association) and Dorna Sports can now reveal an updated calendar for the 2021 FIM MotoGP World Championship as the beginning of another exciting season of racing appears on the horizon, with testing action set to get underway in just over a month.

“The season opening grand prix in Qatar remains confirmed for the 26 to 28 March and it will now be followed by a second event, the Grand Prix of Doha, at the same Losail International Circuit the following weekend, from the 2 to 4 April.

“The Autodromo Internacional do Algarve in Portugal will then host the third round of the Championship from the 16 to 18 April before the paddock heads to the Circuito de Jerez-Angel Nieto as previously planned.

“The ongoing Covid-19 pandemic and resulting lockdowns and complications sadly oblige the postponement of both the Argentina GP and the Americas GP until the last quarter of 2021.

“Any further updates or changes will be provided as soon as available.”

Due to the cancellation of the Sepang test, MotoGP will hold two extra days at Losail on 6-7 March ahead of the original final test at the circuit on 10-12 March.

It is unclear yet whether these races will be open to spectators and whether media will be allowed access.

Postponed Grands Prix to be rescheduled subject to the pandemic:

MotoGP on TV today – How can I watch the European Grand Prix?