Ducati's superior form of late has been impossible to ignore, but the Bologna-based manufacturer heading into the Aragon Grand Prix as the favourite is the biggest sign of strength they have shown yet.

Round-by-round, more and more proof emerges that the best MotoGP bike in 2018 belongs to Ducati.

Apart from the chaotic Argentine Grand Prix, won by Cal Crutchlow, only Marc Marquez has been able to beat the Ducatis to victories, and for three races now even the champion couldn’t stop Andrea Dovizioso and Jorge Lorenzo.

Heading into Aragon, despite Ducati’s recent dominance, there was a sense Marquez would be back to winning ways.

Aragon is one of those Marquez tracks after all – he might not have the same impeccable record like at the Sachsenring or Austin, but it’s been victory or crash for him at the Motorland track since he entered MotoGP.

Dovizioso on the other hand, is not at all in favour of the circuit: "It's not my favourite tracks; it's not too easy to say a nice part of the track.

"I think it's very beautiful track, but for my style is not the best. There are always long corners, I don't love this too much.

"This created a big problem about the tyres so this is the bad point for us because we have to manage a lot the tyres."

And that’s perhaps the biggest sign of strength from Ducati all year – on a track that Marquez favours, and Dovizioso doesn’t, it's the latter who has the edge.

The weekend started with a Ducati 1-2-3-4 in FP1, but that was easy to shrug off as the Italian outfit had a private test at Aragon recently, and Honda did not.

By the afternoon, Marquez moved ahead of the Ducatis, but his pace was not yet on par – he couldn’t break below the 1m49.0s, while both Lorenzo and Dovizioso did a 1m48.7s.

On top of that, it was Marquez who complained of not having fully solved the question of tyre management, despite running with the hardest rear option available.

At the same time Dovizioso, having already worked on setting the bike up in the test, focused on and succeeded at minimising tyre wear.

"I am really happy with the feeling I have because I was able to be faster, the pace on the race is really good," he said.

"I am happier than what I can expect before the weekend, because during the practice we improve a little bit, not the speed but in the way I can save the tyre.

"I think it will be the key for the race tomorrow, for everybody. It will be for sure a difficult race because everybody is struggling with the consumption of the rear tyre, and it will be very hot, so the strategy will be very important tomorrow." 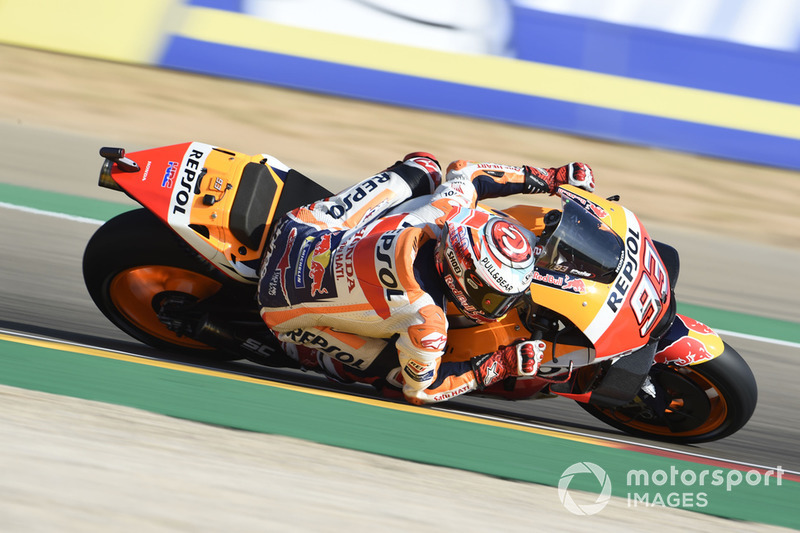 Tyre wear is indeed crucial at Aragon, shown well by the unusually frequent use of the hard rear up and down the field.

Despite that, both Marquez and Dovizioso explored using the soft rear in FP3, but by the time the tyre life exceeded 10 laps, the former just about managed to set 1m48.9s, while the latter could still do a 1m48.5s.

For FP4, most of the field reverted back to hard, and the aforementioned duo tested the tyre at its most used state – Dovizioso putting in 18 laps and Marquez 26 laps on their respective rear tyres.

It was again Dovizioso who had the upper hand, consistently lapping in the 1m48s, Marquez managing it just once.

Two weeks ago at Misano, Marquez and Lorenzo seemed to have a bit of an edge over Dovizioso, but the Italian ended up square and fair beating the Spanish duo.

Now signs are the exact opposite, and while it would be foolish to discard Marquez at any circuit let alone Aragon, it is Dovizioso who heads into the race as the favourite.

The duo will once again not be left alone by Lorenzo either, especially as Aragon is just as much Lorenzo’s track as Marquez’s.

Lorenzo actually had better pace than Dovizioso in FP4, but his run was on a lot fresher tyres, and the same crucial couple of tenths that he lacked at Misano could see him fall short of victory at Aragon as well.

Danilo Petrucci has been close too but, like Lorenzo, his pace on really used tyres has yet to be seen. Unlike the Spaniard, his tyre management skills aren’t proven yet, so he is more likely to fall behind in the late stages.

Jack Miller, on top form after a mid-season slump, has also posted some impressive times, while Nieto Ducati pair Alvaro Bautista and Karel Abraham look strong enough to fight inside, or close to, the top 10. 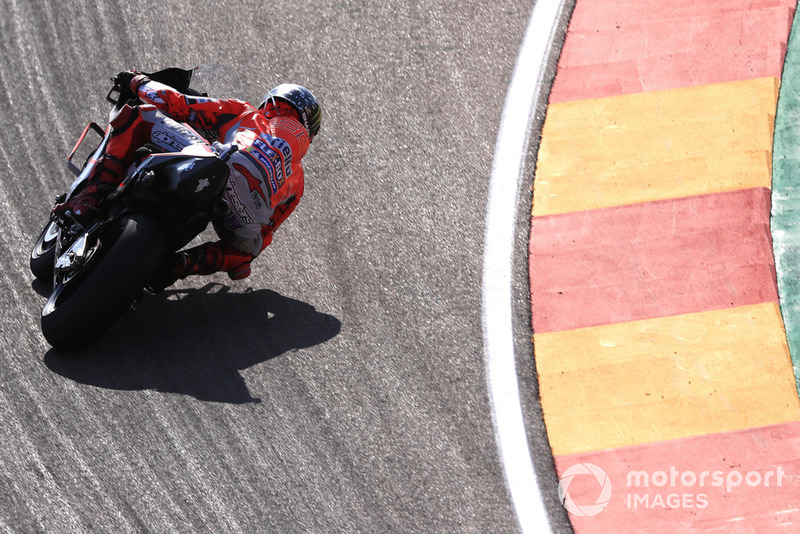 In the Honda camp, Marquez isn’t miles better than Cal Crutchlow or Dani Pedrosa, who this weekend is closer to the Briton than usual, helped by the carbon swingarm he was given at Misano.

Pedrosa, who only has six races left of his MotoGP career, could well be facing one of his better chances of ensuring he doesn't end his final season before his retirement without a podium.

After a mini-resurgence at Misano, Yamaha has slumped once again – the Iwata-based manufacturer's showing at Aragon has been nothing short of abysmal so far.

The best Yamaha in qualifying was Maverick Vinales in 11th (he starts 14th after a grid penalty) and Valentino Rossi had to endure his equal worst-ever qualifying, starting the race from the sixth row in 17th.

Vinales appears to be Yamaha’s only hope for a semi-decent result, as the Spaniard had a strong run in FP4, but he would need to have a storming start, which has not exactly been a strong suit for him this year.

Rossi and Johann Zarco have shown nothing to suggest they could even be in the top 10 and while it's surreal not to predict them achieve at least that, this race is likely to leave both with bitter memories.

Andrea Iannone hasn’t achieved much in a while, but the Suzuki rider will be one to watch, as his pace looks good enough for a top five result, and could act as a random element to shake up the status quo of the top three in the race. 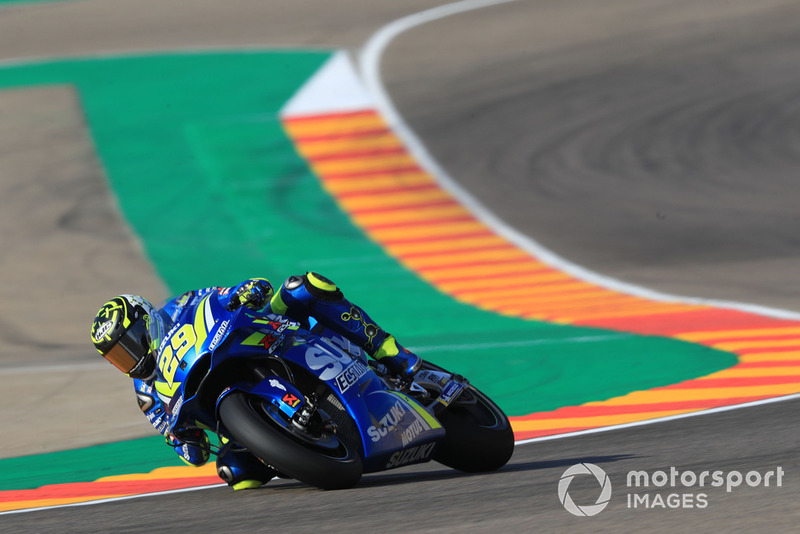