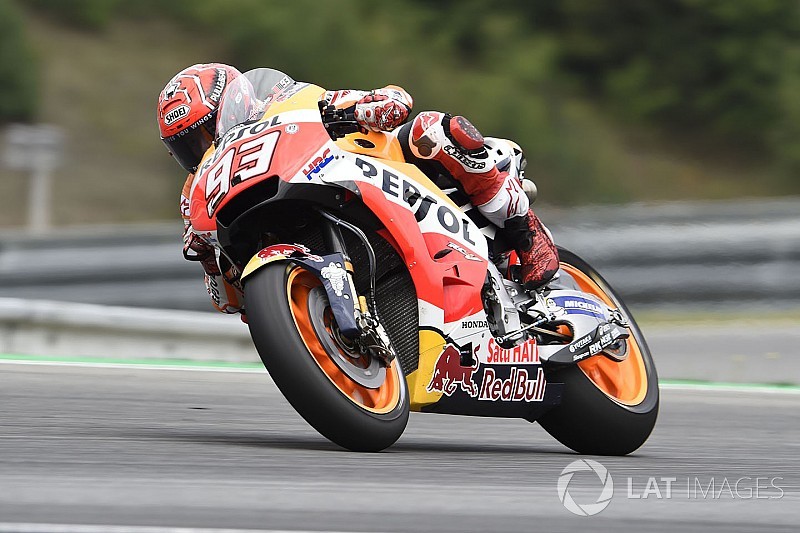 After Marc Marquez's disqualification from the 2013 Australian Grand Prix, the Honda rider has won all bar one of the six flag-to-flag MotoGP races that have been held since.

In that 2013 Phillip Island race, Repsol Honda new boy Marquez arrived with the possibility of being crowned champion in his debut season in the premier class.

But because of the Australian track's new asphalt, the tyre allocation that Bridgestone brought was at the limit in terms of tyre wear and couldn't survive the full race distance of 27 laps.

As a result of those circumstances, every rider on the grid had to swap bikes during the race, which was shortened to 19 races, and had to come into the pits on either lap 9 or 10.

Marquez was leading the first group and didn’t enter to change his bike until the 11th lap. As a result, the black flag appeared and Marquez was disqualified.

However, as the saying goes, every cloud has a silver lining, and that race in Phillip Island made the difference inside Marquez's crew, led by chief mechanic Santi Hernandez.

That group of cronies somehow are different, if we compare them with other teams. They have a special way of facing every single day inside the strange and occasionally hostile MotoGP universe, and they know how to do it within a company as particular as Honda.

The only Grand Prix he couldn’t get the victory was at Aragon in 2014 (won by Lorenzo), where he crossed the finish line in 13th after crashing.

Among all those victories, the two most striking were last Sunday's Brno race and the one we witnessed last year at the Sachsenring.

In both cases, Marquez knew how to manage a very tricky situation while riding a bike set up for the rain, entering the pits sooner than planned and going back out on track with slick tyres.

At Brno, Ducati didn’t have its second bikes ready when both Jorge Lorenzo and Andrea Dovizioso entered to swap, and it was the same with Tech 3 Yamaha's Jonas Folger, who followed Marquez into the pits on lap two and lost a big chance to score a top result.

On the other hand, Marquez knew that his second RC213V would be ready for him from the very first lap, because his crew chief Hernandez had assured him of this fact.

“We learned a lot from Australia 2013 and the most important thing is to not repeat the same mistake again," said Marquez. "The key is to have people to trust by your side.

The Brno win means Marquez now has a 14-point lead over Yamaha's Maverick Vinales in the title standings, having been 37 behind following June's Mugello race.

“One of the reasons for my effort is my team, they are all here giving 100 percent," Marquez added. "When you come back on track after the holidays, it is compulsory to be at the maximum level.

"In these circumstances, and regarding to what happened this time in other boxes, the rider is as important as a mechanic."

KTM can now fight for Q2 on merit, says Espargaro