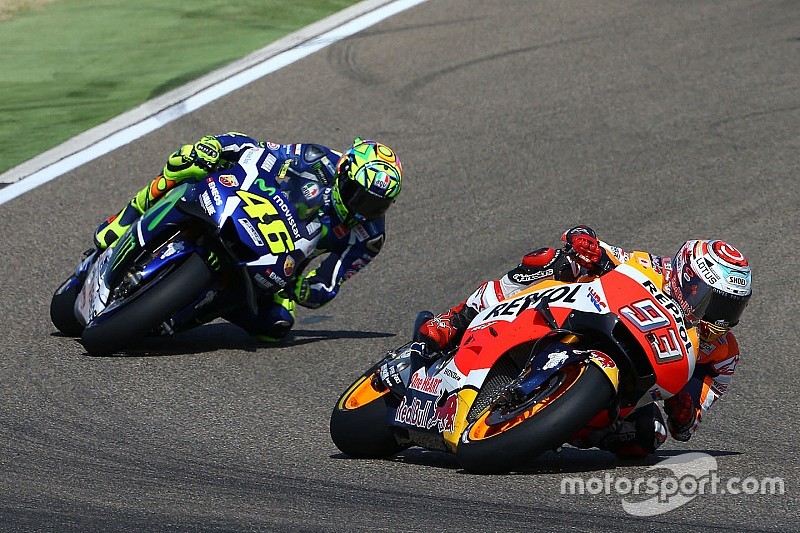 With Marc Marquez now on the brink of a third MotoGP title, Yamaha must understand how it has lost the championship despite having the most balanced bike.

The way the 2016 season has progressed throws up a significant statistic: Yamaha won five of the first seven races, but hasn't done it again since. Valentino Rossi's win at Barcelona in June was the last time one of the Japanese manufacturer's riders has been on the top step of the podium.

On the other hand, Honda, which only had two wins until then - both from Marc Marquez - has won five times with four different riders, while Ducati (Austria) and Suzuki (Silverstone) have won once each.

As much as Yamaha tries to show serenity, Rossi was very clear last weekend at Aragon. The Italian has considered this year's title a lost cause for some time now, but now he's also worried about next year, given the performance of the bike.

"We are bit worried, in the sense that we need to work and do something more in the final part of the season, but we also need to focus on next year," he said at Aragon, where he finished third.

"It's hard to improve the bike in the last four races, but we can establish a base to take a step forward in 2017."

His teammate, Jorge Lorenzo, pointed to the electronics as the root of the problem, something paradoxical when you consider that, at the start of the year back in March, everybody knew that the Iwata manufacturer had adapted best to the newly-introduced spec software.

"Yamaha adapted very well to the new electronics, better than Suzuki and Honda, but maybe we've stalled since," said the reigning world champion, who will become a Ducati rider after the final race of the season in Valencia.

Yamaha's coordinator Massimo Meregalli is doing all he can to minimise his team's slump. He said recently that the new bike will not see the light of day until November, as it will have several important updates.

Honda, meanwhile, has already tested twice with its revamped 2017 engine and the updates have pleased the riders so far.

Although Meregalli has tried to play down the situation, nobody in the paddock doubts that Yamaha has lost a golden chance to secure another crown, given the problems its rivals had at the start of the season - especially keeping in mind that the company had won the triple crown in 2015 (riders', teams' and constructors' titles). At this point, with four races left, Honda leads in all three categories.

How could this happen? The answer is due to several factors combined.

First, Honda has Marquez: a 23-year-old genius who, apart from having incredible talent and being utterly fearless, has now learned how to play his cards right; to attack when he can win and to play it safe when he can't.

Then, on a technical level, Honda has made a lot of progress with the electronics that initially gave it so many headaches.

And then there's a third element that, although it may go unnoticed to many, is just as important as the other two: the tyres that looked to be tailor-made for Lorenzo during the pre-season have now become his kryptonite.

After Scott Redding's scare in Argentina - his rear tyre delaminated at high speed - Michelin implemented an emergency plan to avoid a repeat, and changed the construction of its rubber.

Lorenzo was among those who came off worst from this change. With the new tyres, cornering speed - one of his main virtues - was compromised, especially given the lack of stability and feeling on corner entry.

Despite this, the Spaniard is still fighting for second place in the championship with Rossi, and although no one at Yamaha wants to admit it, that's also a source of worry.

Meregalli can insist that there's no reason to be perturbed – but there are also few reasons to remain calm.

Interview: Why Silverstone win is merely a "starting point" for Suzuki