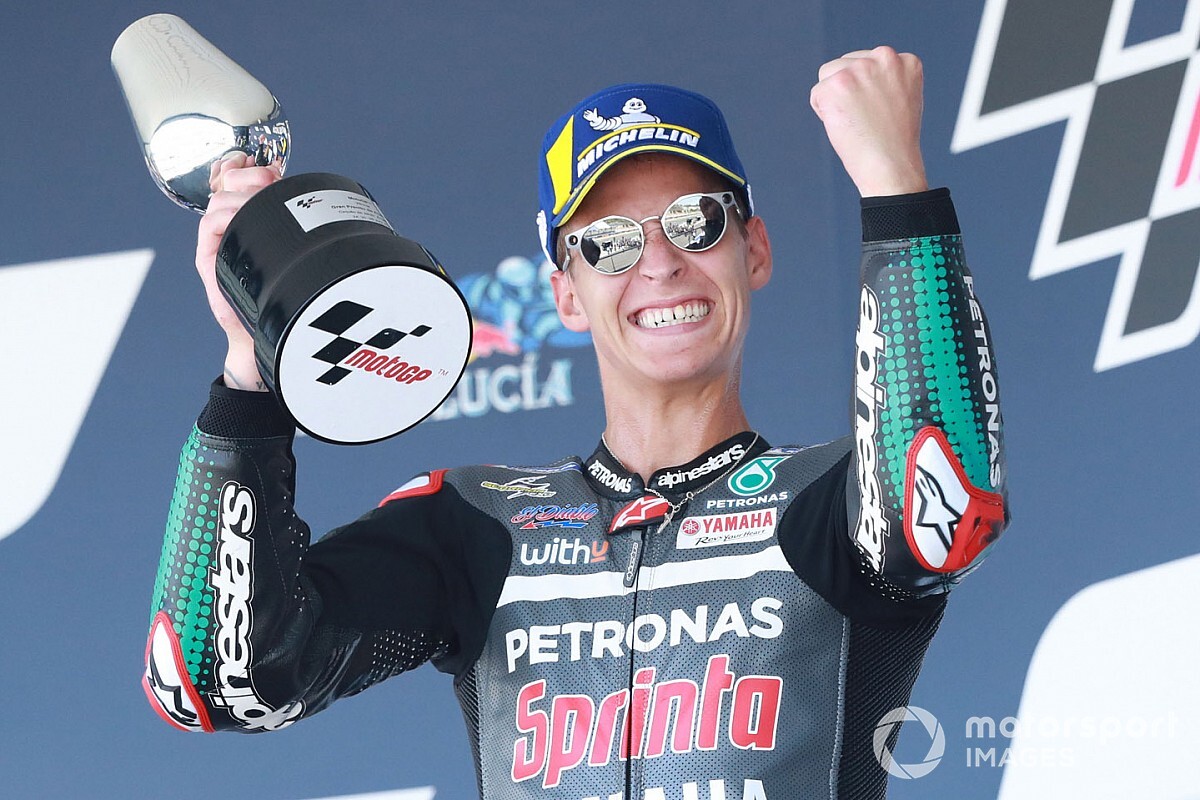 The extreme heat caused a high rate of attrition through accidents and mechanical issues, though Petronas Yamaha rider Quartararo avoided all of that to ease to his second-successive win to seize command in the championship.

Quartararo got into Turn 1 first from pole off the line, with Vinales and Rossi making it a Yamaha 1-2-3 in the early laps.

Vinales ran wide at the last corner at the end of the lap, allowing Rossi to move ahead and Quartararo to quickly put daylight behind him.

By lap five, Quartararo was 2.1.s clear as Vinales struggled to clear Rossi, while the Pramac Ducati pair of Jack Miller and Francesco Bagnaia homed in.

Vinales – who looked one of the strongest throughout practice – couldn’t find a way by Rossi, who kept second with his ability to brake better than his team-mate.

All of this allowed Quartararo to be four seconds clear by lap 10, while Bagnaia pounced on a mistake for Vinales at Turn 6 when the Yamaha ran wide to take second.

Rossi had managed to gap the chasing Bagnaia and Vinales, but his old problem of rear tyre preservation began to trouble him around 12 laps into the race and he was passed by Bagnaia when he ran wide at Turn 6.

Bagnaia was able to gap Rossi by over two seconds, but was denied a maiden podium on lap 20 when his Ducati started smoking, forcing him to pull off-track.

Vinales rallied and hounded a struggling Rossi, and finally made a move stick on the penultimate lap when Rossi ran wide at Turn 9.

Quartararo cruised to the chequered flag, with Vinales heading Rossi for the first all-Yamaha podium in MotoGP since 2014.

LCR Honda rider Takaaki Nakagami started closing down on Rossi, but couldn’t quite surmount the 41-year-old Yamaha rider and had to settle for a career-best fourth.

Joan Mir got his Suzuki to fifth - matching his best finish in MotoGP - ahead of Andrea Dovizioso, who recovered from 14th on the grid on the best of the Ducatis at the flag.

Pol Espargaro was the sole KTM at the finish in seventh at the end of a miserable day for the Austrian manufacturer, with Brad Binder crashing out – having wiped out Tech3’s Miguel Oliveira at the start – and Iker Lecuona falling off early on.

Alex Marquez rose from last to eighth on the sole Repsol Honda, after reigning world champion brother Marc pulled out on Saturday due to the pain of his broken arm.

Johann Zarco was ninth on the Avintia Ducati, while Alex Rins heroically got his Suzuki into 10th despite riding with a fractured shoulder.

Tito Rabat (Avintia), Aprilia’s Bradley Smith and the injured Cal Crutchlow (LCR Honda) were the last of the 13 survivors.

The second Petronas Yamaha Franco Morbidelli was on course for a debut podium having hounded Rossi in the latter stages, but was forced out by an engine issue similar to the one which took Rossi out of last week’s Jerez race.

Miller crashed out of the podium fight at Turn 9 on lap 11, while Danilo Petrucci on the factory team Ducati and Aprilia’s Aleix Espargaro also slid into retirement.