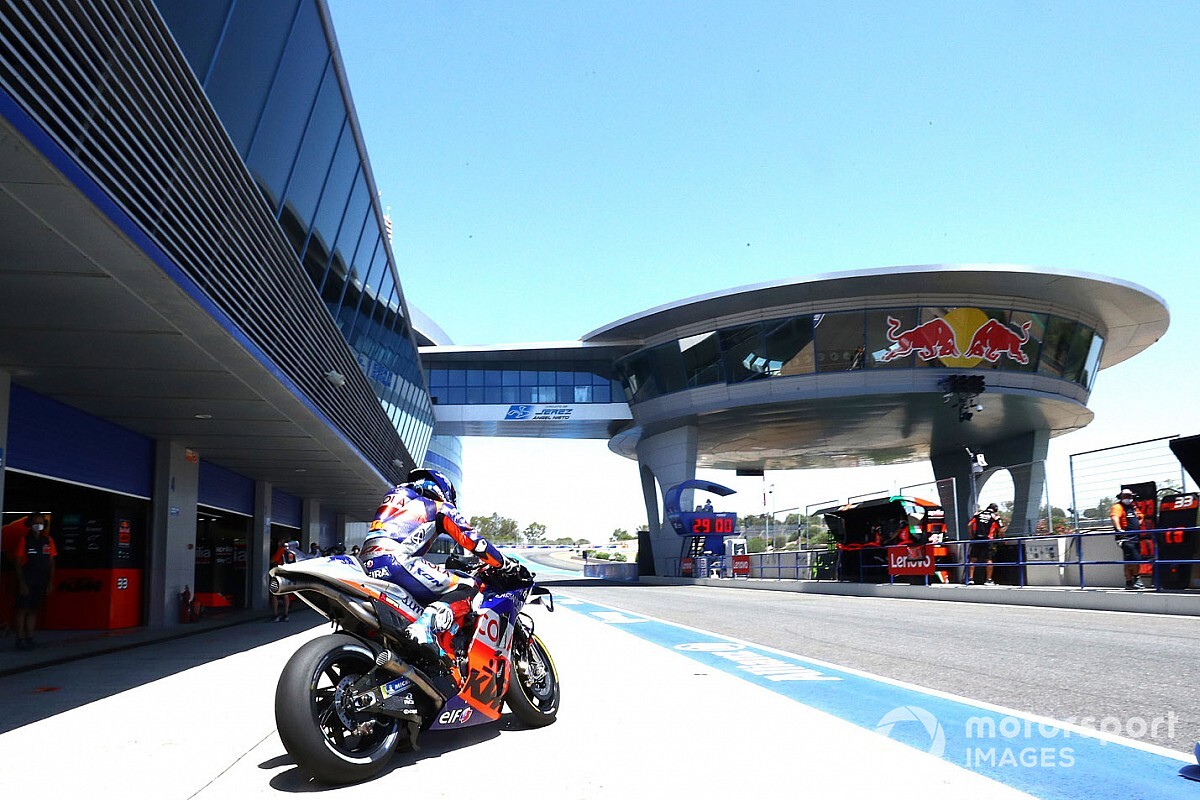 MotoGP is making a second visit to the Jerez circuit in Spain for the Andalusian Grand Prix on July 24-26. Here’s the reasoning behind the name of the race and why MotoGP has had to resort to double headers at the same track.

Following a thrilling start to the coronavirus-delayed MotoGP season with the Spanish Grand Prix, the paddock will stay at Jerez for the second round of the campaign.

All eyes will be on Marc Marquez as the reigning world champion makes a heroic effort to compete in a grand prix just days after undergoing a surgery on his right arm.

Alex Rins and Cal Crutchlow, who also suffered injuries during the previous weekend, have also been declared fit to race in the Andalusian GP.

Injuries for the above trio of riders means Fabio Quartararo will be the favourite for victory aboard the Petronas Yamaha.

Why is MotoGP racing at the same track twice?

The MotoGP calendar has had to undergo multiple changes in light of the coronavirus pandemic. The original season opener in Qatar featured only Moto2 and Moto3 classes, while German, Dutch, Finnish, British, Australian, Japanese and Italian GPs were all called off.

In response to the spread of the virus, MotoGP released a 13-round calendar that runs entirely in Europe, although the series is still aiming to hold flyaway events later in the year.

Given the situation, it was easier for MotoGP to host multiple events at the same venue, and the support from the government in Spain made it possible to hold a double header at Jerez.

MotoGP’s strategy emulates that of Formula 1, which also kickstarted its 2020 campaign with back-to-back races at the Red Bull Ring in Austria.

Andalusia is one of the 17 autonomous communities that together constitute Spain. Located in the southern part of the country, Andalusia is further divided into eight provinces, one of which is Cadiz - the home to the Jerez circuit.

Why is it called the Andalusia Grand Prix?

Since each MotoGP race must carry a different name, the second event at Jerez has been christened after the autonomous community in which Jerez is located. This is no different to how the second F1 race at the Red Bull Ring was called the Styrian Grand Prix.

A typical MotoGP season consists of several races in Spain and each of them carry a different name. For example the race at Circuit de Catalunya in Barcelona is known by the name Catalan Grand Prix.

Will MotoGP be racing at other venues twice?

Will MotoGP be doing anything differently to the Spanish Grand Prix?

No, the Andalusian Grand Prix will be run as per the exact same format as last week’s event. Four practice sessions will be followed by a two-part qualifying. The race will start at 2pm CEST on Sunday.

MotoGP on TV today – How can I watch qualifying for the Andalusian GP?