The work today was intended mainly to continue the program carried out during the season.

Today at the Valencia Circuit, where Marc Marquez was crowned 2013 MotoGP World Champion yesterday, the first day of the 2014 MotoGP season kicked off with a three-day test. 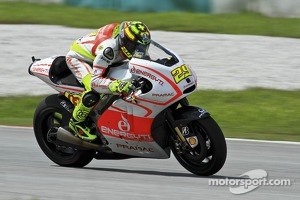 By the time the track closed at 5:00 p.m., Andrea Iannone had turned a total of 49 laps, during which he posted the fourth-best time of the day; the 1’31.925 time was also his best time so far during this trip to Spain.

For Andrea and the Energy T.I. Pramac Racing Team, the work today was intended mainly to continue the program carried out during the season, focusing on aspects that hadn’t been tried due to a lack of time.

Following the analysis of data collected during today's session, the team and Andrea will be able to plan the work to be undertaken during the next two days of testing.

Andrea Iannone – Energy T.I. Pramac Racing Team: “It’s certainly positive to test the day after a race, on the same track, as you’re able to go deeper and better understand if the tests and adjustments made during the course of the season are truly improvements. The references are close, the conditions are very similar to in the race and there’s rubber on the track, so I think it’s very useful.

It was an important day and we worked pretty well, making little tests as we tried to understand if they could improve some aspects of the bike that we’ve been working with for some time. At the moment, it seems that some of them could be good. It’s certainly not enough, but we’ll continue with the work program tomorrow and the next day. As for today, I’m satisfied.”