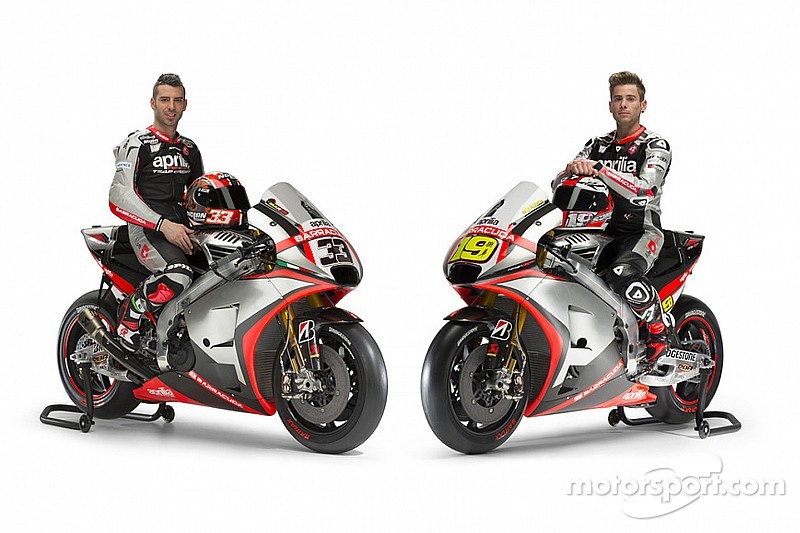 The Aprilia Gresini Racing Team officially launched it’s MotoGP campaign today with the Italian manufacturer presenting it’s new team livery to the world and outlining it’s goals for the 2015 season with the key focus being on the development of the current RS-GP machine.

We believe that this is the solution which is certainly the most risky but also the best one to become competitive as quickly as possible.

With the team performing with moderate progression at the first two test of the year at Sepang where factory riders Alvaro Bautista and Marco Melandri spent time assessing many new parts and set-ups, it was Bautista who was the quicker of the two riders to improve on his pace while Melandri is still adapting from the switch from World Superbikes back to MotoGP.

From 1992 to 2014, Aprilia has managed to win an impressive 54 world title wreaths, 28 of which were earned from 2006 to the present, after joining the Piaggio Group. From current MotoGP Champion Marc Marquez to 9 times World Champion Valentino Rossi to Loris Capirossi; Max Biaggi to Jorge Lorenzo, Casey Stoner, Sylvain Guintoli, Marco Simoncelli and many others, an endless line of youngsters have developed into victorious riders with the manufacturer.

Gresini Racing heads into its 19th season in Grand Prix Motorcycle Racing, having won two world titles (Daijiro Kato in 250 in 2001 and Toni Elias in Moto2 in 2010), 40 wins in GP and MotoGP runner-up World Champion titles in three consecutive season, from 2003 to 2005 with Sete Gibernau and Marco Melandri. Gresini Racing has also been home to top caliber champions such as Alex Barros, Loris Capirossi, Colin Edwards and Marco Simoncelli.

Romano Albesiano, Aprilia Racing Manager is confident about their plans to move their schedule forward by a full year. He said: “We chose to move up our start date, getting into the mix in the 2015 MotoGP World Championship because we believe that this is the solution which is certainly the most risky but also the best one to become competitive as quickly as possible.

"For us this will be a year of testing, development and in some ways even sacrifice, to be taken full advantage of as we look toward 2016 when we will be able to ride a real Aprilia prototype bike onto the track.”

Fausto Gresini, Team Manager is also excited about the next 10 months and the future with Aprillia saying, “This exciting adventure, which for Aprilia is a return to the top world motorcycle racing category and for Gresini Racing opens up an important new chapter.

"We want to be as prepared as possible for a challenge which promises to be difficult, but exciting at the same time. After all, I couldn't have imagined anything more stimulating for someone like me who lives and breathes racing passion. I agree one hundred percent with Aprilia's choice to jump straight into the mix.

Teammates ready to take on the best in the world

Bautista has already gelled well with his RS-GP machine and is ready to continue this hard work during the year. Speaking at the launch he said, “I like this new challenge. It gives me new stimulation and great motivation.

"We are well aware that we have a lot of work to do and we are also aware that this will be a season marked by development, so we aren't setting any goals for ourselves except to improve race by race, working hard. I was very pleased with the first two test sessions in Malaysia.”

Melandri isn’t expecting great results straight away but is very happy with his team and the direction they are moving in. He said, “I am confident and I know what this racing department is capable of, although that doesn't change the difficulties that we will inevitably have to face.

"For now it is just a matter of acquiring a feeling with the bike-tire package, much different than the one I used last year. We have a long road ahead of us, but I believe that with patience and determination we'll be able to achieve a good level, realistically in the second half of the season.”