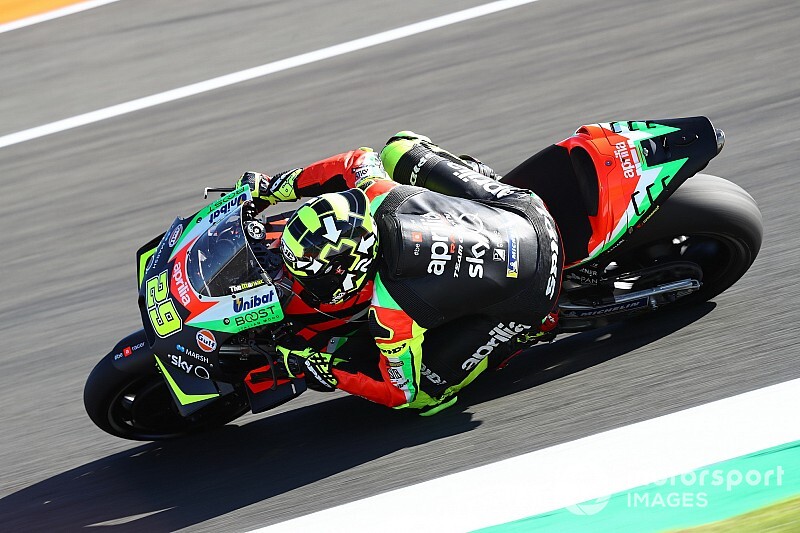 Andrea Iannone says his Aprilia MotoGP bike caught fire during the post-Valencia test because the Italian manufacturer was trying an “extreme” gearbox solution.

Iannone caused a red flag a couple of hours into Wednesday’s running at the Valencia test when his Aprilia burst into flames on the main straight on the run into Turn 1.

Aprilia had no new items to test in Valencia – which Aleix Espargaro branded as “not at all” acceptable – but were trying different set-up solutions to apply to the development of its radical 2020 bike.

One such approach was to try and run the Aprilia’s gearbox with shorter gear ratios like its rivals in a bid to find more horsepower.

However, the Aprilia engine had never revved as high as it did during that test and ultimately led to Iannone’s bike catching fire.

“We’re not used to using a high speed like on Wednesday morning,” Iannone said. “We tried an extreme solution, because we understood that our opponents use much shorter gearboxes and consequently much higher engine revs.

“Our bike has never been [run] so high. We tried it and there was a risk.”

Commenting on the moment the fire erupted, he added: “I was so scared because it happened on the straight and the bike caught fire. I felt very warm on my feet and oil was [landing] on the brake lever.

“You are angry at the time, but I think that’s normal. We tried different solutions because we want to find a few more horsepower.

“We know that we need to improve and last night [Tuesday] we found some very interesting things.”

“Romano is a very brave person in this respect, because maybe we shouldn’t have risked this situation,” he added. “But he led us to find something.

"Let’s say it went wrong in one way and good in another. It was a dangerous situation and obviously frightening.”