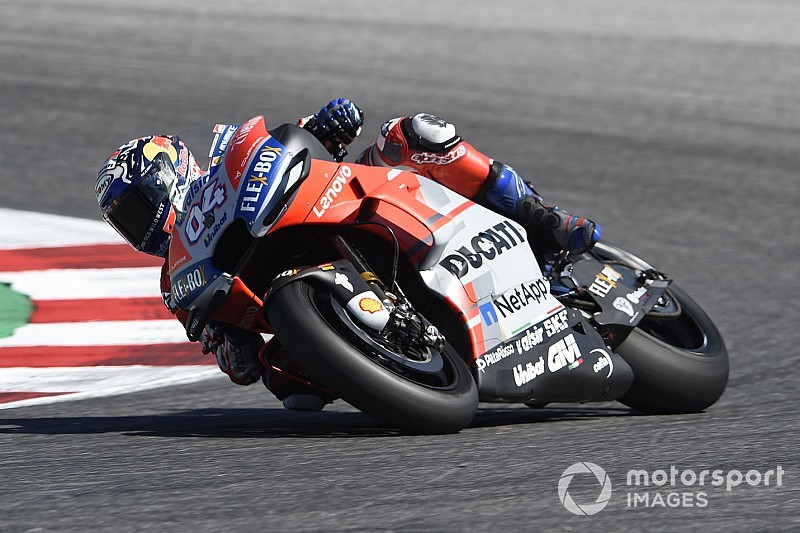 Andrea Dovizioso was fastest in first practice for MotoGP's Aragon Grand Prix, as Ducati riders locked out of the top four places.

Home hero Marc Marquez led the first half of the 45-minute session with an early benchmark 1m48.804s, the only rider below the 1m49s barrier.

The second rider to do so was Dovizioso, who went exactly one thousandth of a second quicker than Marquez, and the factory Ducati rider did not lose the lead for the remaining 20 minutes.

Although for a brief moment the top three were separated by 0.001s when Maverick Vinales set the same time as Dovizioso, the Ducati rider then went eight tenths quicker.

He stayed ahead to top the session with his 1m48.020s, with only his future teammate Danilo Petrucci managing to get close to him with a 1m48.210s.

Jack Miller and Jorge Lorenzo completed an all-Ducati top four, but both more than seven tenths off the pace.

Vinales and Marquez were best of the rest in fifth and sixth respectively with two more Yamaha riders, Valentino Rossi and Johann Zarco, following them.

Cal Crutchlow was ninth ahead of Andrea Iannone, who had a small mechanical issue with his clutch cover during the session, Alex Rins and Espargaro brothers Pol and Aleix.

The session ended in dramatic fashion for Xavier Simeon, riding Tito Rabat's GP17 for the second weekend in a row, as his engine exploded at Turn 1 in a huge cloud of smoke.

Avintia's MotoGP debutant Jordi Torres was 24th, 4.8s slower than Dovizioso but comfortably within the 107% cut-off.