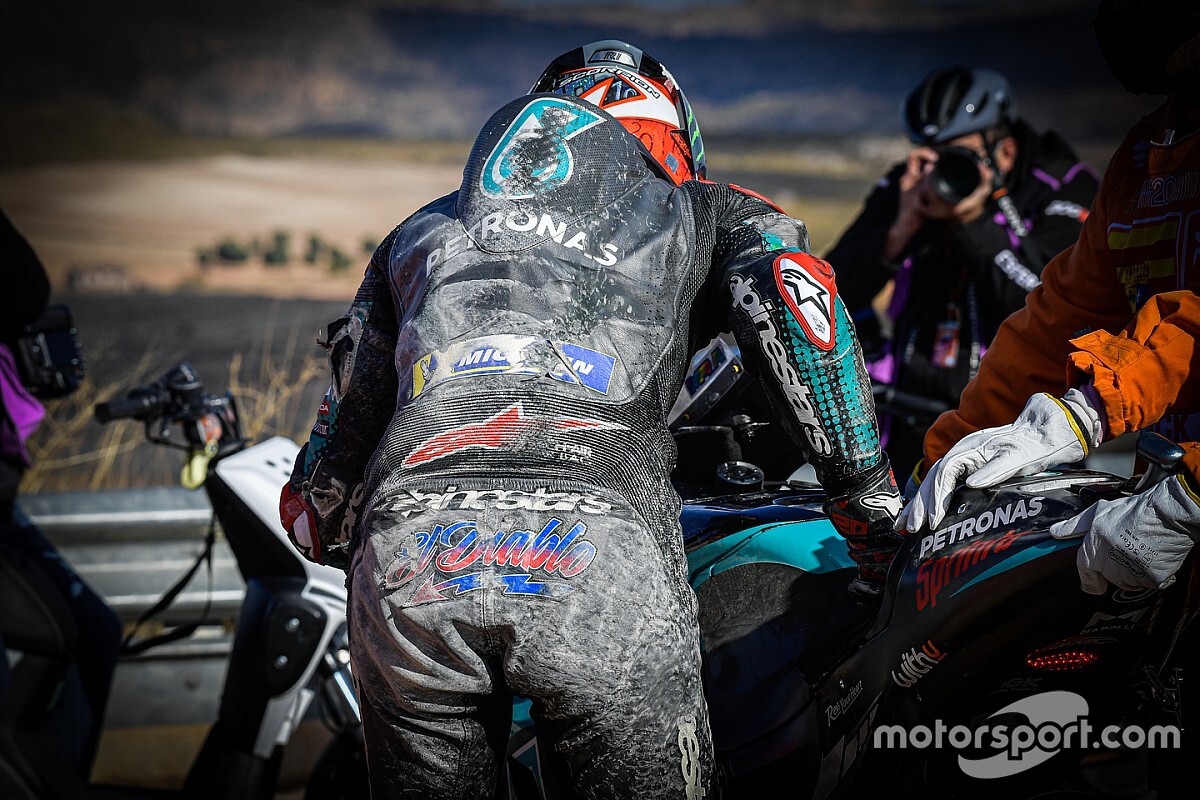 Franco Morbidelli topped a dramatic third MotoGP practice for the Aragon Grand Prix as championship leader Fabio Quartararo had to be taken to the medical centre after a heavy crash.

The session got underway an hour later than originally planned over safety concerns about the cold temperatures, though the conditions meant laptime improvements on the combined timesheets few and far between for much of the 45 minutes.

The only improvement on the combined order in the early stages came from LCR’s Takaaki Nakagami, who went top in FP3 and up to seventh overall with a 1m48.710s.

With 18 minutes to go, Nakagami jumped up to fourth on the combined standings with a 1m48.374s, while Pramac’s Francesco Bagnaia improved his overall lap time – but only to 19th.

Bagnaia’s fellow Ducati rider Dovizioso was caught out by the conditions at the right-hand Turn 6 and crashing with 18 minutes to go.

More drama would strike another title contender, as Quartararo was flicked from his Petronas SRT Yamaha at Turn 14.

Quartararo had to be stretchered off track before being taken to the medical centre for a check-up. However, a Petronas team spokesperson confirmed that X-rays showed Quartararo had no broken bones despite pain in his hip.

As the session entered its closing stages, more improvements on the combined order as the field made their final bids for a place in Q2.

Pramac’s Jack Miller had managed a lap good enough for sixth, but had it cancelled for a yellow flag infringement, which dropped him back down to 17th with just a few moments to go.

Maverick Vinales’ Friday benchmark of 1m47.771s went unchallenged on the combined order, though Morbidelli cut his advantage to just 0.088 seconds to move up to second overall and ended FP3 fastest.

Despite his crash, Quartararo still holds a place in Q2 in third, while LCR’s Cal Crutchlow leapt to fourth overall and second in the session late on with a 1m48.314s.

KTM’s Pol Espargaro was third in FP3 and fifth on the combined times, heading Suzuki’s Joan Mir and Honda’s Alex Marquez, who makes his first appearance in Q2 this year.

Nakagami, the second Suzuki of Alex Rins and Aprilia’s Aleix Espargaro rounded out the final Q2 places on the combined order.

Ducati’s Aragon disaster continued on Saturday morning as none of its riders made it directly to Q2, with Dovizioso 13th on the combined order ahead of Johann Zarco (Avintia), Bagnaia, Avintia’s Tito Rabat, Miller and Le Mans race winner Danilo Petrucci.

The Sochi-like Portimao feature that even has Mercedes puzzled

The Sochi-like Portimao feature that even has Mercedes puzzled