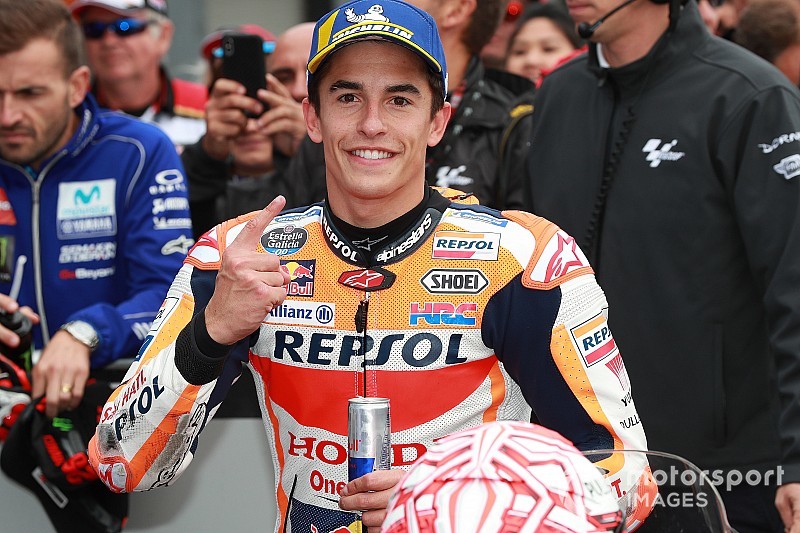 The World Champion made the best of changing conditions at each and every turn, a stunning 1m29.199s lap leaving him more than three tenths clear of Yamaha riders Maverick Vinales and Johann Zarco.

A short burst of rain right as the session went green left conditions delicately poised in terms of tyre choice, the possibility of heavier rain leading to a frantic race to bank slick tyre laps from the word go.

Marquez responded accordingly, going quickest with a 1m31.282s before really putting the hammer down and clearing the field by over a second with a 1m29.742s on his second lap.

Vinales was keen to go with Marquez, however, closing to within 0.082s just seconds later.

As the weather stabilised at the midway point, the times edged downwards. First it was practice pacesetter Andrea Iannone who took over top spot with a 1m29.712s, before Zarco banked a 1m29.705s.

But then a well-timed slipstream from Alex Rins gave Marquez another formidable gap, a 1m29.199s putting him more than half a second clear of the field.

That margin was reduced to three tenths by Vinales with four minutes to go, but that was as close as it got, a hint of rain in the dying stages of the session curtailing any last-minute heroics.

Iannone ended up fourth, followed by teammate Rins and local star Jack Miller, who was best of the Ducatis.

Having cruised out of Q1, Alvaro Bautista was the sole rider to crash out of Q2. Jorge Lorenzo's replacement fell after losing the rear of his Ducati into MG, the bike firing into the tyre wall after parting ways with the Spaniard.

That meant he finished up 12th, behind Hafizh Syahrin and Pol Espargaro.

Bautista held a comfortable gap after the first runs in the opening segment of qualifying, a 1m30.969s followed by a 1m30.344s leaving him the best part of half a second over the chasing field.

At that point Franco Morbidelli was sitting second, before Karel Abraham closed the gap to Bautista down to 0.2s with eight minutes to go.

As the final runs kicked off Bautista put his Q2 promotion beyond doubt with a 1m29.851s, which would ultimately prove unbeatable.

At the same time Espargaro made his play for KTM's first Q2 appearance of the season, jumping from sixth to second with a 1m30.105s.

Takaaki Nakagami slotted into fourth for the session, followed by Morbidelli and Bradley Smith.

Dani Pedrosa never even looked like fighting for a Q2 spot. The Honda rider ended up eighth for the session, more than six-tenths off what was needed to get out of the session.

Australian MotoGP qualifying as it happened

NASCAR to be 'as aggressive as possible' against Confederate Flag