It may not quite have been last year's thriller, but Phillip Island still threw up another eventful MotoGP race on Sunday - with a winner few would have expected. Jamie Klein assesses the field.

By his own admission, Lorenzo was lucky to make Q2 as the gamble of others (including his own teammate) to switch to intermediates in Q1 didn't pay off. But he struggled hugely on a drying track, lapping the thick end of seven seconds off the pace, setting the tone for a race that he can be happy to have come away from with 10 points in the bag. Still, finishing six seconds behind Pol Espargaro's satellite Yamaha in fully dry conditions is inexcusable for a rider of Lorenzo's stature. 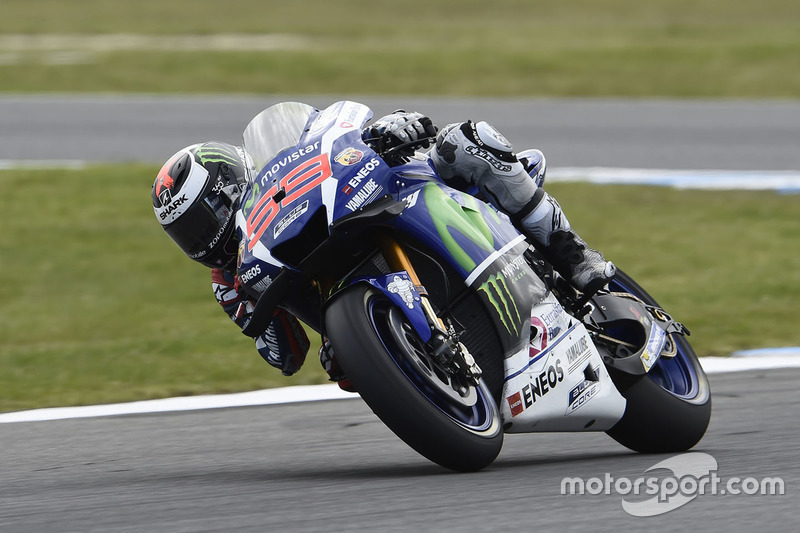 A nightmare qualifying - his worst in more than five years - for Rossi was more than made up for by a sensational charge through the pack in the race, the Italian's strong warm-up showing giving him confidence that a podium challenge was on the cards even with so much ground to make up from 15th. Picked off Aleix Espargaro for third just as Marquez crashed out, and felt Crutchlow would be possible to catch - but couldn't live with the Briton's searing pace in the second half. 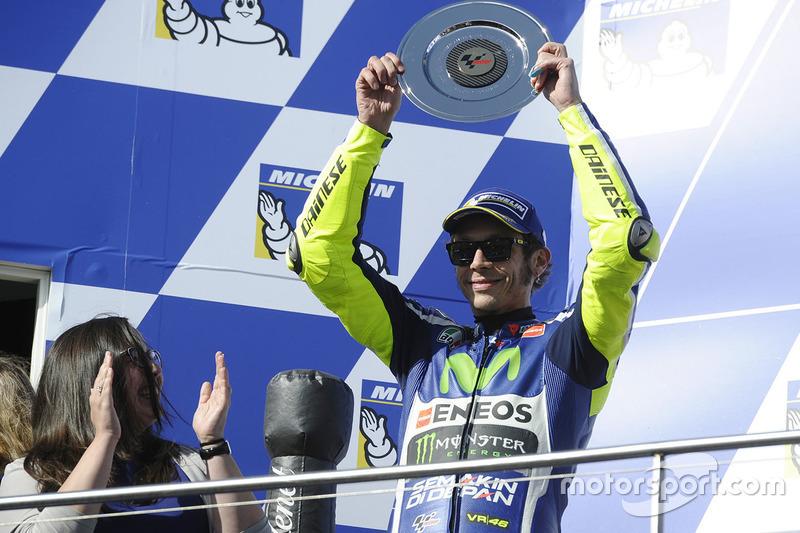 Proving once again he is the master of mixed conditions, Marquez's bold call to go out on slicks front and rear in Q2 delivered the Honda man a comfortable pole. He duly converted this into an early lead in the race, albeit with Crutchlow's satellite machine following in hot pursuit, until a front-end crash for the Spaniard at the aptly-titled Honda hairpin on lap 10 - something he admitted was down to over-confidence after sealing the title in Japan. After all he's achieved this year, he's allowed an off-day. 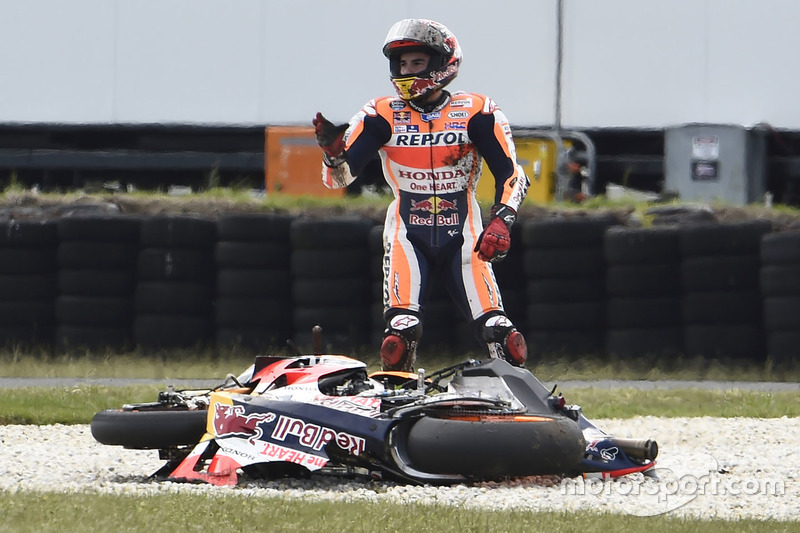 Back for a second MotoGP outing this year – this time on the Repsol Honda in place of Dani Pedrosa – former champion Hayden was far better prepared to make an impact than he had been at Aragon, where he been called up to replace Jack Miller at Marc VDS. On balance, conditions in qualifying probably flattered the American a little, but he was well in the thick of the battle to finish seventh before being barged off his bike by Miller on the penultimate lap. 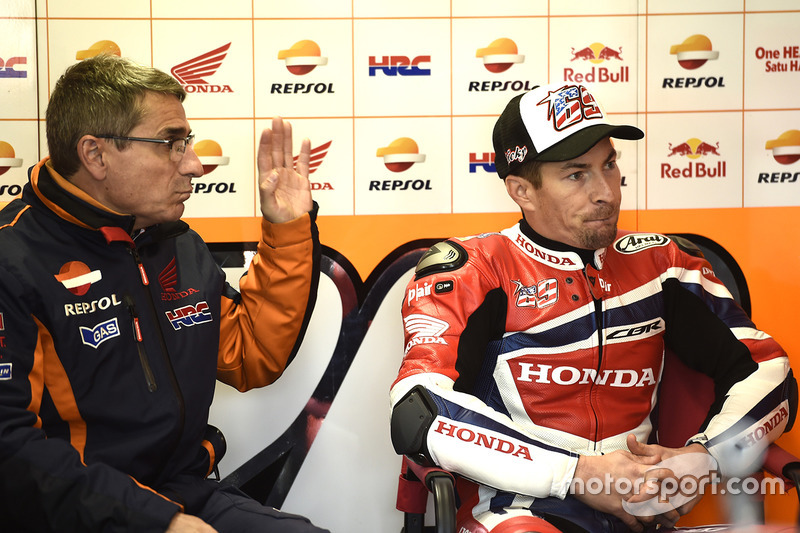 On a fairly ordinary weekend for the Ducati team, Dovizioso was his usual dependable self as he brought the Italian marque a strong fourth place, less than 10 seconds adrift of his former teammate Crutchlow and well clear of those behind. Made up for an ordinary qualifying performance with a strong series of early laps, but had no answer for the late race pace of Maverick Vinales when it came to the fight for the bottom step of the podium. 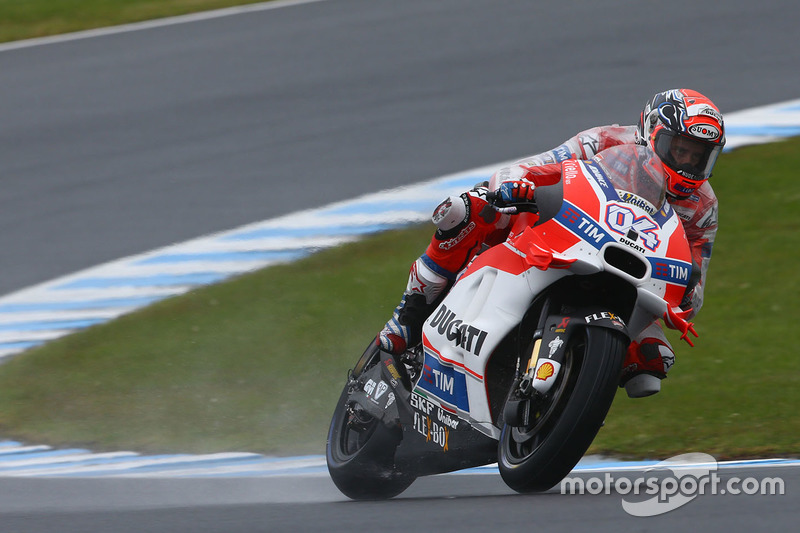 Having performed so well on the Avintia Ducati at times this year, Barbera’s two-race stint in factory colours will have to be looked back upon with disappointment. Shaded by ‘Dovi’ in qualifying, the Spaniard went backwards at the start and spent his race fighting riders of which a works Ducati rider would normally be expected to be comfortably ahead, and paid the price for this when he fell off amid some frenetic scrapping with three laps to run. 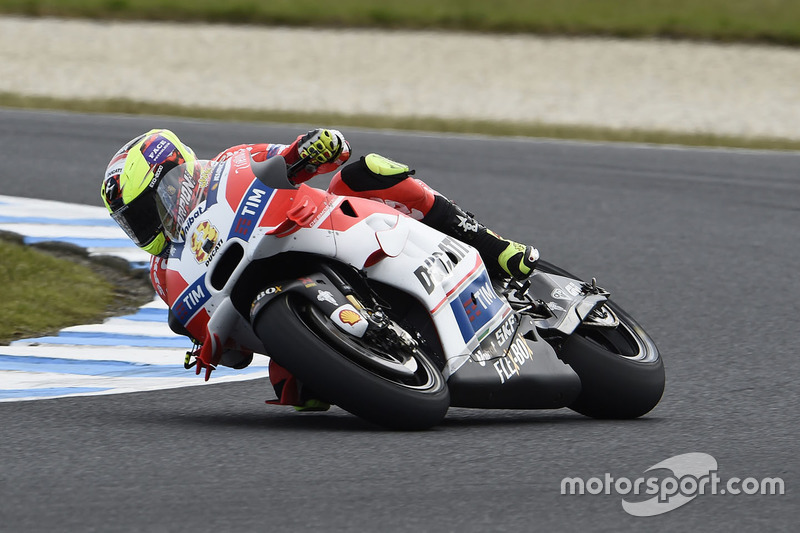 Phillip Island saw another superbly measured performance by Vinales, who kept his cool in the early laps of the race to make steady progress from his lowly grid slot of 13th, and kept his tyres in good enough condition to be able to carry on making up ground in the closing stages. Pulled away from Dovizioso late on after dispatching the Ducati man, but ran out of laps to catch his future teammate Rossi – who admitted his swifter progression through the pack was to thank for keeping second. 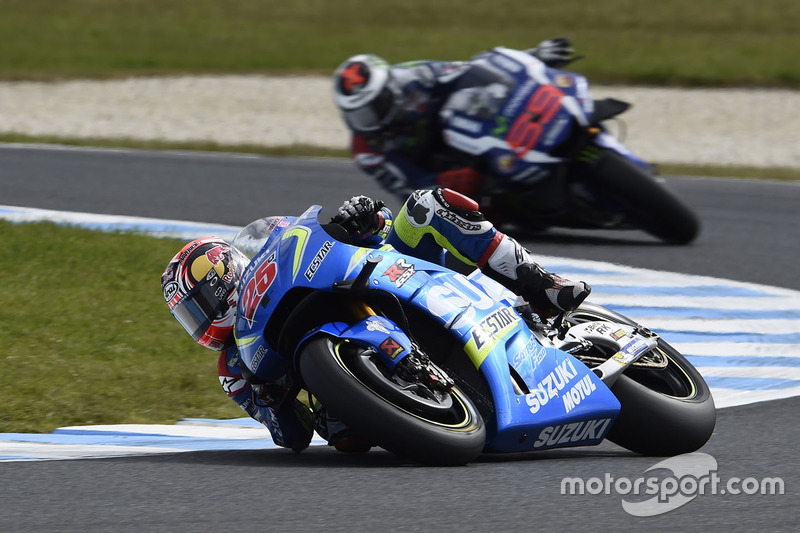 It would be a mighty shame if the elder of the Espargaro brothers was to go the whole year without a podium finish on a machine as competitive as the Suzuki GSX-RR – but with only two more chances left, it’s looking increasingly like being the case. Aleix did a sterling job to qualifying fourth in the miserable weather on Saturday, and was holding his own in battle for third against Vinales and Dovizioso in the race before losing the front-end with five to go. 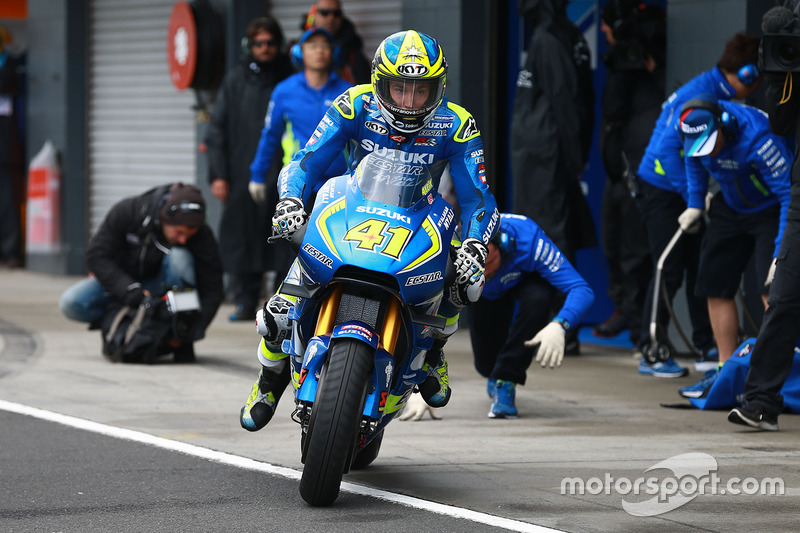 While much of Crutchlow’s maiden MotoGP win at Brno came down to tyre choice, no-one can say that the Brit’s second trip to the top step of the podium wasn’t earned on sheer merit. Yes, he had some fortune with Marquez’s crash, but Crutchlow went for the same choice of the harder front tyre and made it work, leaving Rossi trailing in his wake. Whether he could have won even without Marquez’s tumble is open to debate, but in the end also somewhat academic. 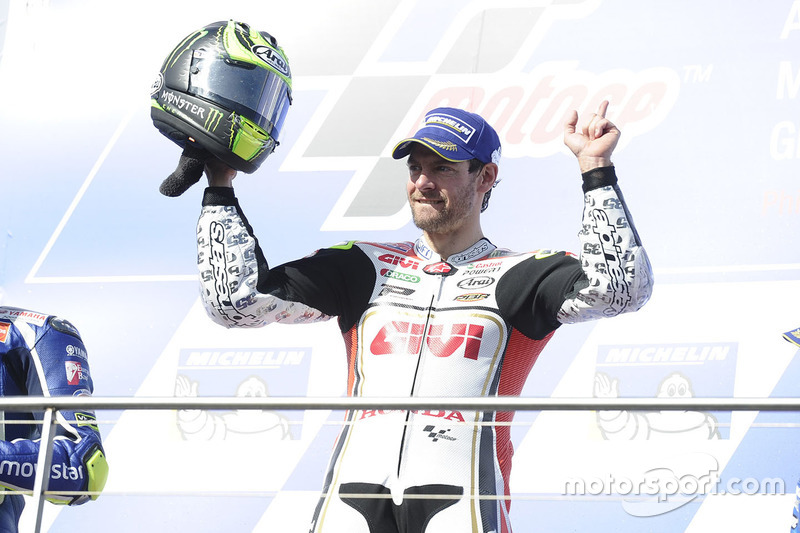 One of the stars of qualifying, it was inevitable that in dry conditions Miller would be going backwards in the race – but the young Australian wasn’t too disappointed to only bring home the Marc VDS Honda in 10th on home turf, five places lower than he started. One of five riders to opt for hard front tyre, Miller struggled in the early laps but found better pace late on – only to make contact trying to pass Hayden and then slipping behind both Smith and Petrucci on the last lap. 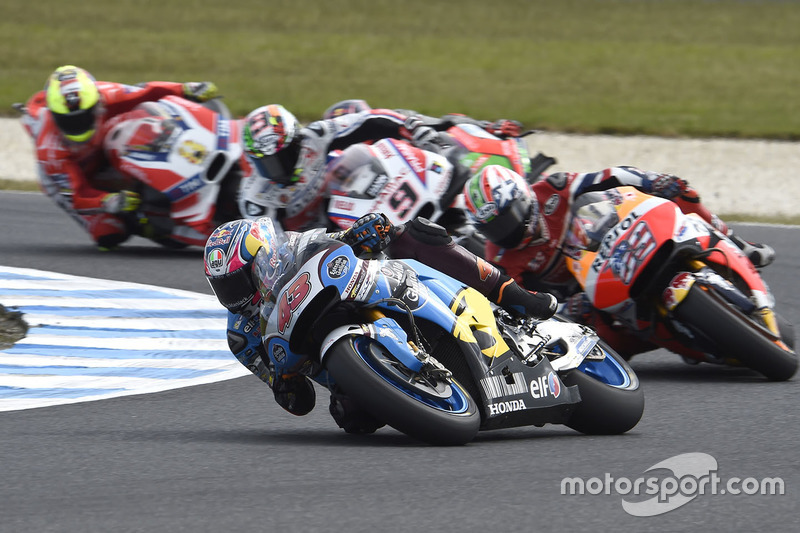 Taking full advantage of conditions on Saturday to book an unlikely slot on the front row of the grid, Pol’s lightning start briefly saw him surpass Marquez for the lead before he began the predictable slide down the order. Spent much of the race in a comfortable sixth, never being threatened by Lorenzo’s factory bike, and has his older brother’s crash to thank for handing him his fourth top-five finish of an impressively consistent 2016 campaign. 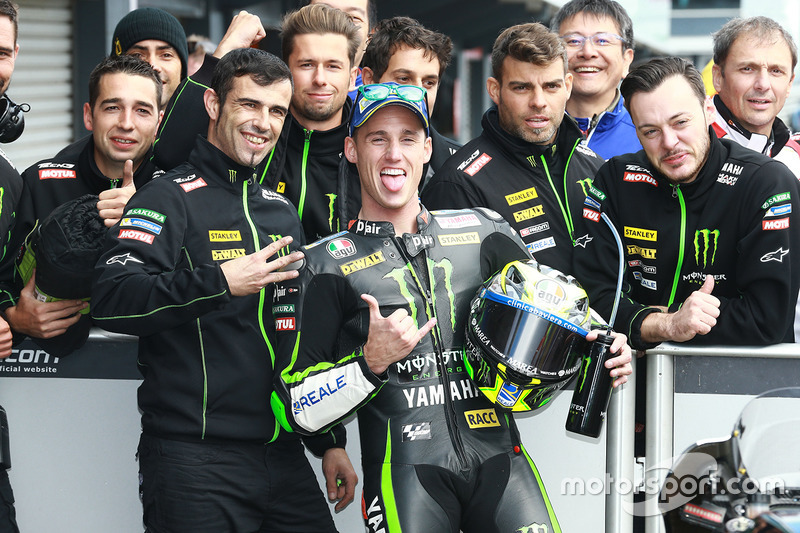 In only his second race back from his knee injury, Smith proved his recovery is firmly on track in Australia despite admitting to still not having full mobility in his right leg. His eagerness to stay out of trouble cost him a few places at the start, but his race pace was solid enough for him to catch up to the tail of the battle for seventh with a few laps to spare, the Briton finally charging ahead of Bradl, Petrucci and Miller to score a well-deserved eighth place finish. 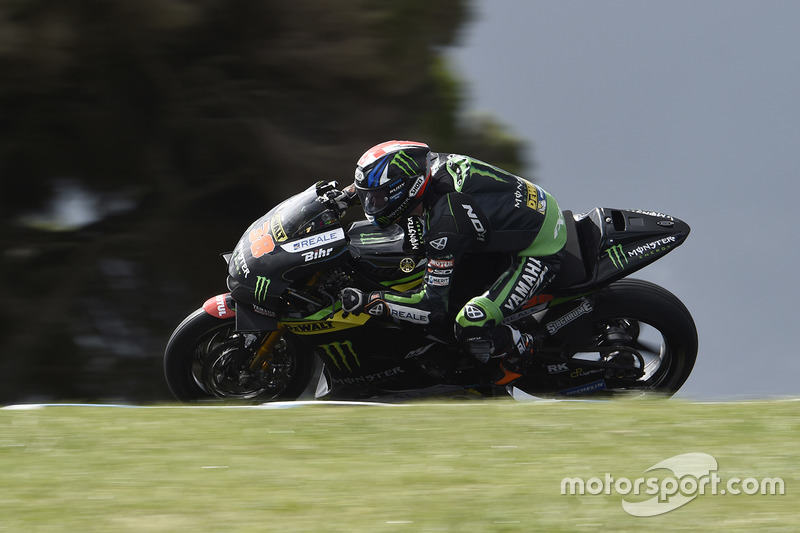 The promise of a GP17 for the winner has transformed the fight between the Pramac Ducati pair into perhaps the most important on the grid for the final few rounds, and Redding arrived in Australia with ground to make up on Petrucci - trailing 31-9 counting scores since Brno. And, with a fine ride to seventh, the Gloucester-born rider did just that, gambling on a number of set-up changes after warm-up that allowed him to come out on top in the race-long battle for seventh. 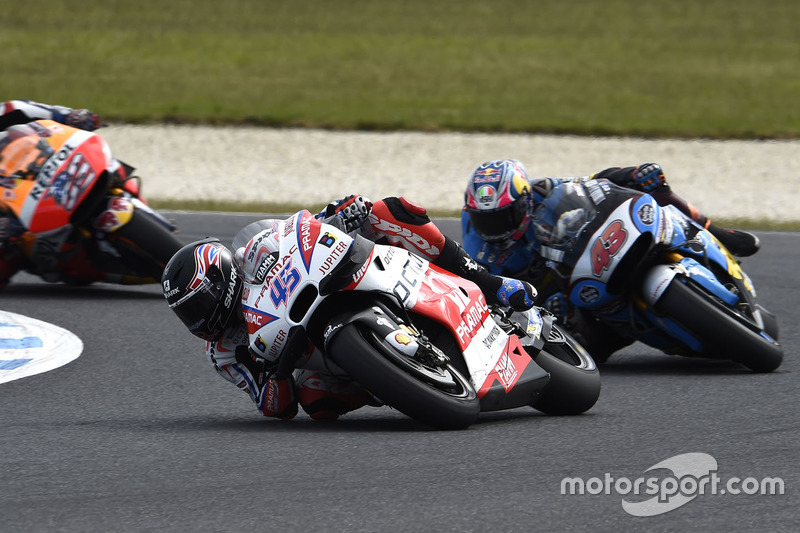 As has often been the case this year, Petrucci excelled in the wet at Phillip Island during qualifying, booking himself a spot on the second row and putting Redding firmly in the shade. Unfortunately for the Italian, his pace in the dry was less impressive, resulting in him becoming mired in battle with his teammate, Hayden and Miller for much of the distance. Once Redding managed to ease clear of the dust-up, Petrucci was on course for eighth before being demoted to ninth by Smith on the last lap. 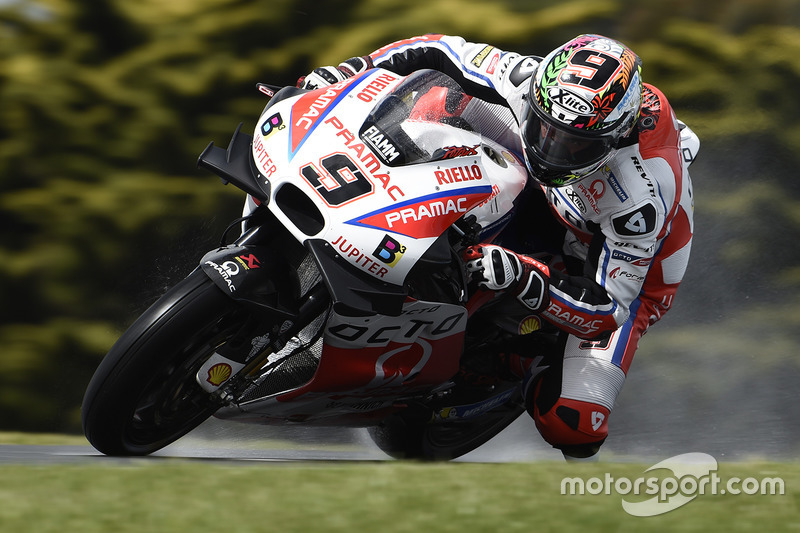