Back to Spain for Ducati Team for Catalan Grand Prix

The Italian now heads to Barcelona to attempt to best their rivals in this weekend's MotoGP race.

For the second time in a month and a half, the MotoGP championship heads to Spain this week, this time for the Catalan Grand Prix. Site of the Ducati Team’s first MotoGP victory a decade ago, the Circuit de Catalunya is notable for its long main straightaway and ample passing opportunities, and it invariably draws a large and enthusiastic crowd. 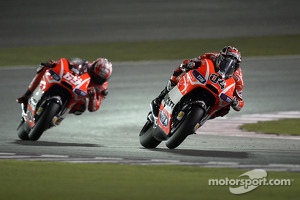 Andrea Dovizioso has posted five podium finishes across three classes at the Catalan Grand Prix, including a 250cc victory in 2006. The Italian, who finished third in last year’s MotoGP race and will be riding the Desmosedici GP13 at the track for the first time, has recovered from the sore neck that he suffered in a crash at the Italian Grand Prix last week. Although Nicky Hayden’s sole podium result at the circuit was a runner-up finish in 2006, the same year he won the world championship, the American enjoys the track and is hopeful of a strong result this weekend.

Following the race weekend, the Ducati Team will participate in a one-day official IRTA test at the same circuit, where they will continue development of the Desmosedici GP13.

Andrea Dovizioso – Ducati Team “Barcelona is one of the nicest tracks on the calendar, and it’s always fun to go to Spain for a race weekend. As for the Ducati, I’m not sure because I’ve never ridden the GP13 on this circuit, but it might not be the best track for us because of the fast corners where our bike tends to ‘pump’ a bit in the rear. Still, I’m keeping an open mind as we head to Barcelona. I’m always very excited to go there, and I’m optimistic following a good weekend at Mugello and a good test last week.”

Nicky Hayden – Ducati Team “Barcelona hasn’t been a great weekend for me in recent years. I’ve struggled a bit there, especially with the long corners, which are very important. Still, we know Catalunya is a great track, and I really enjoy the area and the atmosphere. I certainly hope to do a better result there than I have the last couple of seasons. We’ll see what we can come up with, and we’ll keep pushing and moving forward.”

Vittoriano Guareschi – Team Manager “Barcelona is a track that has many nice memories for Ducati and for me; ten years ago, the GP3 made its debut there in winter testing with Loris Capirossi, who took the pole in the time attack. Also, this year is the tenth anniversary of Ducati’s first MotoGP victory! We head to Barcelona fresh off of another two days of testing at Mugello, where we found a couple of interesting things. Now we’ll try them on a different track to see if they provide some benefits. I’d just like to add that during this busy period—between racing, testing, and development—we’re all under pressure and working really hard, so I’d like to thank all the team members for their effort.”

Yamaha prepare for battle in Barcelona

Miller ‘pissed off’ by tyre issues in British MotoGP qualifying