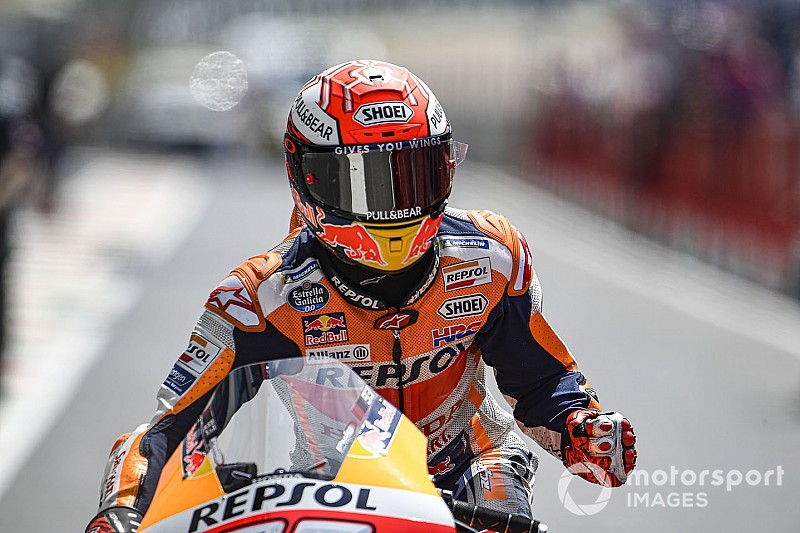 Honda rider Marquez set the early pace, returning to top spot late to see out the session as the reference with a best effort of 1m40.692s.

A 1m41.221s from the championship leader put him on top as the 45-minute session began, though he was soon deposed by the Petronas SRT Yamaha of Franco Morbidelli.

The pair traded session-best laps over the next few minutes, with Marquez gaining the upper hand with a 1m40.915s.

Maverick Vinales put Marquez's time under threat in the final 17 minutes, the works Yamaha rider just 0.074s adrift with his effort, before edging ahead with a 1m40.872s.

This stood as the benchmark until the closing six minutes, when Marquez unusually returned to circuit with fresh soft front and rear slicks fitted to his RC213V, on which he deposed Vinales with a 1m40.833s.

Fabio Quartararo, fresh from arm-pump surgery, proved Marquez's closest challenger 0.111s behind in second, though looked set to go top on his SRT M1 before getting held up by Aprilia wildcard Bradley Smith late on his final lap.

Vinales was shuffled back to third as a result, with Ducati's Andrea Dovizioso and LCR Honda's Takaaki Nakagami a further 0.010s behind to complete the top five.

Jack Miller was sixth on the Pramac Ducati, while Alex Rins shadowed him on the Suzuki. Petronas SRT rider Franco Morbidelli, his Yamaha stablemate Valentino Rossi and Aleix Espargaro (Aprilia) filled out the remaining places inside the top 10.

Petrucci, who looks set to secure a 2020 deal with Ducati in the coming days, was 0.932s adrift of Marquez's best in 18th in a low-key first session in Barcelona for MotoGP's newest race winner.

Jorge Lorenzo headed him by 0.018s, with the Honda rider seeking for more comfort on his Honda fitted with new ergonomic updates first tried in a trip to the marque's factory in Japan following the Italian Grand Prix.

Smith was 22nd as he begins his third wildcard weekend for Aprilia, with Suzuki test rider Sylvain Guintoli trailing him in 23rd.

Crutchlow: What Lorenzo wants "we've been asking for years"