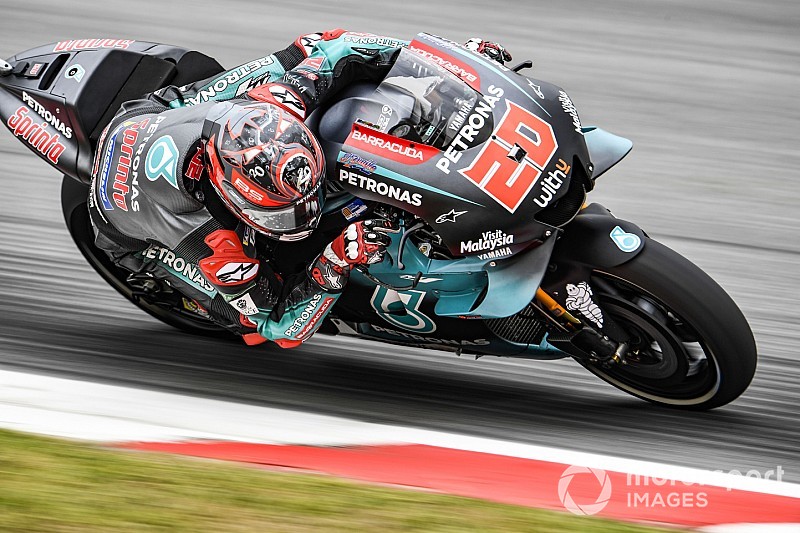 The French rookie, who underwent arm pump surgery in the lead-up to the Catalan Grand Prix, beat Ducati's Andrea Dovizioso at the chequered flag to end up as the Friday pace-setter.

The Catalunya circuit was hit by a sprinkle of rain late in the preceding Moto3 practice session, but this did not prevent the premier-class riders from running laptimes comparable to FP1 from the get-go.

Championship leader Marc Marquez followed the two works Ducatis on his first run and briefly held the lead but was soon surpassed by Pramac Ducati's Jack Miller, the Aussie posting the first sub-1m41s lap of the session.

This kept him top past the halfway point of the 45-minute session, although Dovizioso and Suzuki's Alex Rins both lapped within just a couple of hundredths off the pace in that time.

Rins had gone off at Turn 4 in the very beginning of FP2, running straight through the gravel and jumping off his GSX-RR – but started climbing the order once he'd returned to the track, eventually taking the lead from Miller with a 1m40.727s.

When much of the pack equipped fresh softs in the very end, Quartararo's teammate Franco Morbidelli fired in the new best lap of the weekend with a 1m40.585s, only to be immediately beaten by a 1m40.360s by Dovizioso.

Quartararo came up 0.006s short of Dovizioso moments later, and was trailing the Italian by a similar margin after three sectors of his last-gasp attempt, yet found a quarter of a second at the end of the lap to end up on a 1m40.079s.

Dovizioso held on to second place, ahead of the year-old Honda bike of LCR rider Takaaki Nakagami and the works KTM of Pol Espargaro.

Yamaha's Valentino Rossi spent much of the session outside of the top 10 but found some extra pace at the very end, slotting into seventh place, behind his two proteges Francesco Bagnaia (Pramac Ducati) and Morbidelli.

Ducati rider Danilo Petrucci was eighth, while Nakagami's LCR teammate Cal Crutchlow made up the top nine as the quickest of the current-spec Hondas.

Rins didn't improve in the closing minutes and ended up 10th, his time matched exactly by Avintia Ducati's Karel Abraham. Unlike those ahead of him in the FP2 order, Rins is not currently on course to progress to Q2 automatically.

This is because Marquez's FP1 time has kept him within the combined classification top 10, as the championship leader ended the second session in only 17th, four places behind works teammate Jorge Lorenzo.

Maverick Vinales is the only Yamaha rider without a provisional Q2 spot, as he ended FP2 a spot behind Lorenzo.

KTM's Johann Zarco and Suzuki's Joan Mir both featured at the sharp end of the timesheets at the start of FP2, but their sessions were compromised by crashes – with Zarco falling in the gravel at the Turn 13 right-hander and Mir following suit at the Turn 2 left-hander.

Crutchlow: What Lorenzo wants "we've been asking for years"