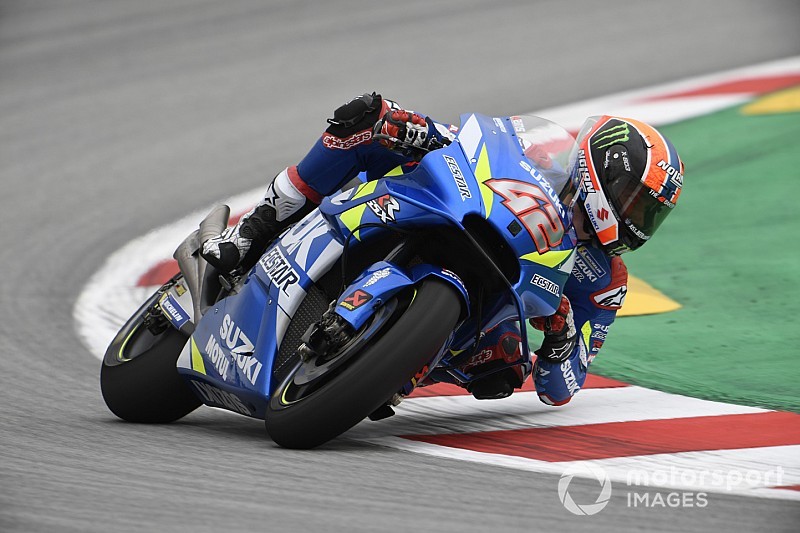 Rins led Yamaha rider Quartararo by 0.036s, the pair proving class of the pack despite doing their best laps a few minutes before the usual late flurry of qualifying simulation runs.

Championship leader Marc Marquez, within the combined practice top 10 by a mere tenth after Friday's action, improved his laptime right away on Saturday morning, and then surpassed Quartararo's Friday benchmark with his next attempt.

This kept the Honda rider top through the opening runs, but Quartararo soon fought back on a pair of fresh softs, logging the first sub-1m40s lap of the weekend

On course to go faster still with his next attempt, the Frenchman was held up behind Karel Abraham's Avintia Ducati, but found himself in clear air once more the lap after and posted a 1m39.583s.

With 10 minutes to go, Rins improved to a 1m39.547s despite running two medium tyres.

He and Quartararo would keep hold of the top two spots until the chequered flag even though neither could go better in the final minutes, with Quartararo suffering the first crash of his MotoGP career at the Turn 2 left-hander.

LCR Honda's Cal Crutchlow sat outside of an automatic Q2 spot when the chequered flag flew, but his last-ditch effort proved good enough for third, 0.164s off the pace.

The factory Yamahas of Valentino Rossi and Maverick Vinales completed the top five, ahead of the leading Ducati of Andrea Dovizioso.

Like Crutchlow, KTM's Pol Espargaro secured a Q2 spot at the death by lapping 0.310s slower than Rins, as he led Dovizioso's teammate Danilo Petrucci.

Marquez in the end was a lowly ninth, progressing into Q2 alongside his teammate Jorge Lorenzo, although the pair had a run-in in the final minutes of the session – with Marquez showing visible frustration with Lorenzo after being seemingly baulked by the three-time champion on his flying lap.

Pramac Ducati's Jack Miller was the last rider to lap below 1m40s, but was relegated to a Q1 appearance at the last moment. Joining him in the first segment will be rookie teammate Francesco Bagnaia, who had been on course to make Q2 after Friday but crashed at Turn 2 on his final run and didn't improve his time.

Petronas Yamaha's Franco Morbidelli was comfortably within the combined top 10 for most of the session, but suffered a violent high-side at the fast Turn 13 right-hander in the latter half of FP3.

He was conscious after hitting the ground, but had to be stretchered off and taken to the medical centre for a check-up, where he was declared fit to continue riding this weekend.

Having been the fastest Honda on Friday, Japanese LCR rider Takaaki Nakagami ended up 12th in FP3, missing out on an automatic Q2 spot by just over a tenth.

Barcelona MotoGP qualifying as it happened