Valentino Rossi was among a number of MotoGP riders puzzled by an “incredible” loss of grip at the Barcelona circuit compared to the year before. 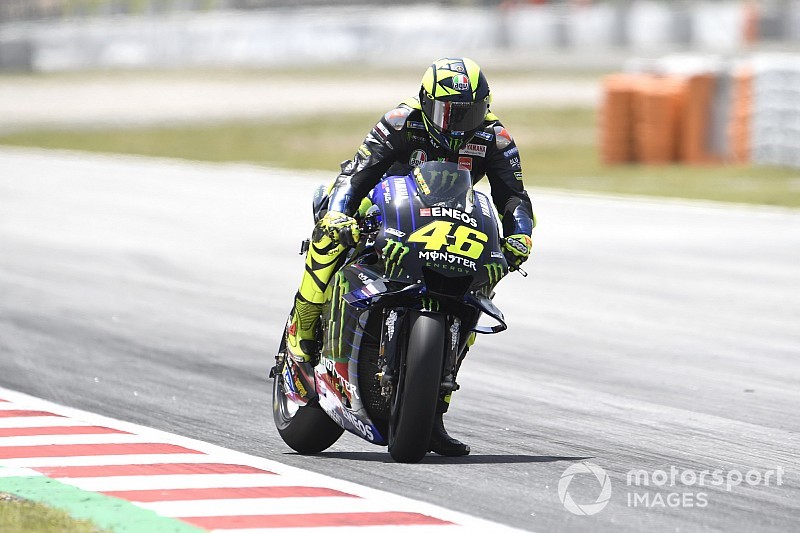 The Circuit de Catalunya was resurfaced in 2018, and Jorge Lorenzo recorded both the new all-time MotoGP lap record and the fastest race lap at the circuit during that year's Catalan Grand Prix weekend.

But riders have struggled to come anywhere near those kind of laptimes in the 2019 edition so far, with Fabio Quartararo's pole some eight tenths slower than Lorenzo's record, and race pace simulations suggesting a similar drop for long runs.

“Barcelona is like this from a long long time,” Rossi said. “Last year they make a new asphalt, so last year the track have grip.

“The pole position is eight tenths faster than this year, but also the pace, but it's incredible, because in one year already the asphalt lose a lot of grip. And we come back in the older situation.

“But usually my experience is like, you try to find the grip in Barcelona for all the weekend, you never find it, so you have to live with this and try to manage in acceleration.”

LCR Honda rider Cal Crutchlow stressed that the track was visibly different to last year, and showed the media photographic evidence to that effect.

“The track's not very good, the tyres aren't working very good for anybody this weekend.

“Look at the colour difference, that's why we've got no grip. But we don't understand why, because they said the CEV [Spanish championship] have been doing the laptimes same, if not better. It was hot last year, it seems really, really strange that there's absolutely no grip on the track.”

“I think definitely the track changed compared to last year,” he said. “The track is super slippery, like scary in some points to be honest - because like you saw with Franky [Franco Morbidelli] this morning, we're having highsides on the entry of the corner, which is not normal.”

Works Ducati pair Danilo Petrucci and Andrea Dovizioso likewise described the condition as “very strange”, with Petrucci saying he was surprised to see “dust on the visor” of his helmet at the start of the weekend.

For Dovizioso, the lack of grip has created lots of questions about what pace riders would be capable of running in the race.

“There was a big confusion during the weekend because the grip is very low, we are one second slower than last year, everybody,” Dovizioso said.

“With this characteristic everybody is struggling a lot to manage the tyres, and it's a bit difficult to make the right decision.

“We are a big group with a similar pace - but it's very difficult to understand the real pace for the race from the competitors, because everybody's struggling and not many riders did a lot of laps [on the same tyre].”