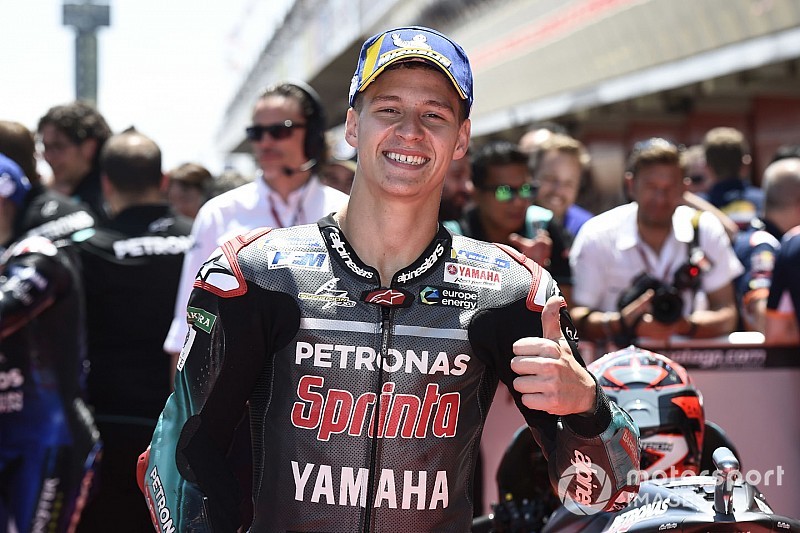 Quartararo, who bagged his sole Moto2 win at the same venue last year and had arm pump surgery in the lead-up to this weekend, beat Honda's championship leader Marc Marquez by 0.015s.

Franco Morbidelli, who had suffered a heavy crash in the Saturday morning practice, had dominated the first qualifying segment, and took the early lead in Q2 with a 1m39.758s.

He and Quartararo had made it a Petronas Yamaha 1-2 after the first runs, and after the works Yamaha of Vinales then went 0.001s quicker than Morbidelli, Quartararo lowered the benchmark to a 1m49.484s.

Marquez slotted into second shortly afterwards, and while Quartararo came up a few hundredths short of his own benchmark on his final attempt, the reigning champion had a big moment at Turn 4 on his final effort and had to settle for second.

Vinales secured his first front row start since Argentina in third, ahead of fellow Yamaha riders Morbidelli – who couldn't improve on his second Q2 run – and Valentino Rossi.

Andrea Dovizioso moved up the order at the chequered flag to finish as the top Ducati in sixth, just ahead of works teammate Danilo Petrucci – who had been third in the order when he crashed at the Turn 5 left-hander.

Suzuki's Alex Rins, quickest in practice, was another rider left to rue a crash, falling at the sharp Turn 10 left-hander late on and consigning himself to eighth on the grid.

The Aussie remounted his bike, returned to the pits, and would improve his laptime on his second run, but qualified only 14th – a place behind rookie teammate Francesco Bagnaia on the older-spec Desmosedici, the Italian having come up a tenth short of advancing to Q2 at Mir's expense.

After his impressive Friday showing, LCR's Takaaki Nakagami will only line up 16th on the grid, beaten also by the Avintia Ducati of Karel Abraham.

Aleix Espargaro qualified as the top Aprilia in 17th, with works teammate Andrea Iannone last on the grid – behind also the team's wildcard Bradley Smith – after his RS-GP slowed with a mechanical problem while exiting the pit garage on the second run.

Barcelona MotoGP qualifying as it happened

Lorenzo: "Most consistent" weekend down to Honda tweaks