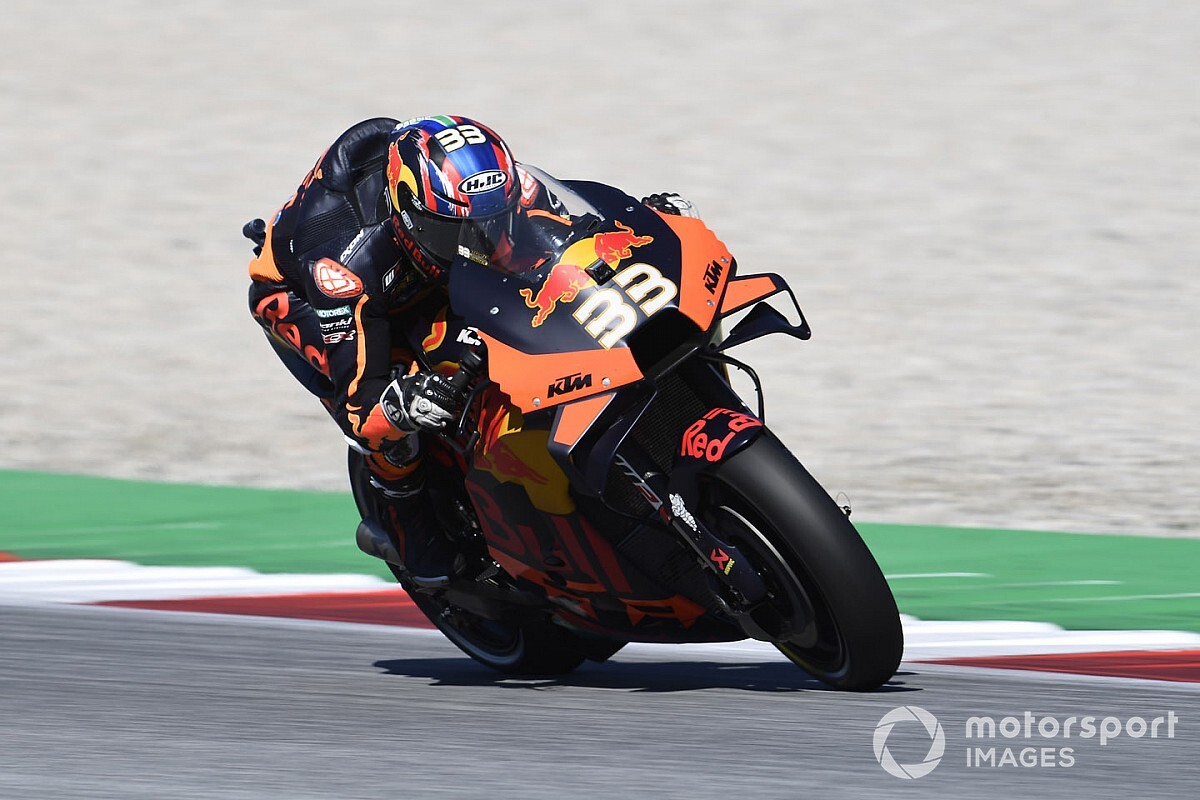 KTM rookie Brad Binder says he is “not at all” thinking about challenging for the 2020 MotoGP world championship despite sitting fourth in the points after the first five races.

Binder has been one of the standout performers of this “chaotic” 2020 season, with the rookie winning his first grand prix just three races into his premier class career at the Czech Grand Prix last month.

Since then, he scored a fourth in the Austrian GP and eighth in the Styria race, which leaves him just 21 points adrift of championship leader Fabio Quartararo heading into this weekend’s San Marino GP at Misano – where, like at Brno and Red Bull Ring, KTM has recent data to fall back on from private tests.

Despite currently being a factor in this unpredictable title battle, Binder admits he is still taking things race by race – though hopes the unsettled nature of the 2020 campaign continues.

“Nah, not at all,” Binder replied when asked if he considers himself a title contender.

“For me, it’s just [taking things] race by race, [I’ve] got to take everything as it comes.

“It’s just insane. If you look at now, the podium is different every week and [there are] riders up, some riders down, problems for some, good weekend for others.

“So, it’s been chaos. It’s been a bit of a chaotic start to the season, but it keeps it interesting and I’m looking forward to the rest of the year.

“I hope it stays this way because it will definitely make it interesting.”

Though coming away from the Jerez double-header at the start of the season with just three points following two big mistakes, Binder displayed podium pace in both outings and has been a rostrum threat since.

However, he feels it is worth reminding that each new track he goes to is initially “so difficult” for him get to grips with the MotoGP bike, hence his reticence to consider himself a combatant in the title race.

“I’m just taking things one day at a time and enjoying life on the MotoGP bike,” Binder said.

“But it’s one thing I really need to keep in mind, every time I go to a new track, it’s so difficult the first couple of days to try and adapt and get used to the bike.

“Like Friday [at the Styrian GP] was much easier than last Friday [at the Austrian GP] because I had an understanding of what to do, and how to ride on this track to go fast on the MotoGP bike.

“In general, it’s great to be sitting fourth in the world championship for sure, that’s fantastic.

“But, [it] would have been nice to finish the races in Jerez I messed up, but I can’t change the past.”