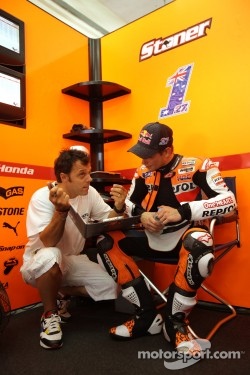 The first round of pre-season MotoGP testing was completed last week, with Bridgestone supplying its 2012 specification tyre to both the private Valencia test and the IRTA test at Sepang as it forges ahead with its preparations for the upcoming season.

Repsol Honda’s Casey Stoner was fastest over the three days of testing at Sepang – lapping a second faster than the best time at last year’s corresponding test - but away from the timing screens, Bridgestone worked around the clock to continue evaluation of its 2012 specification tyre as part of its ongoing development programme.

What was the most important outcome for Bridgestone from the first round of 2012 testing?

“The most important outcome for us was the positive rider feedback regarding warm-up performance and feel we received at both the Sepang and Valencia tests. Looking at the lap times from the tests, it is easy to say that the 2012 specification tyres are working well with the 1000cc bikes, but it was more important for us to ensure that the riders felt confident with the new spec tyres and we are very pleased that this was the case.”

Apart from evaluating the 2012 specification tyres, what other important work took place at Sepang?

“All the teams undertook testing of an experimental front tyre we brought to Sepang. The purpose of this was to further understand the performance characteristics of the 1000cc MotoGP machines and the data acquired is very valuable to our ongoing tyre development programme.”

What has Bridgestone done to address the tyre performance requirements of the CRT machines?

What was the major purpose of your meeting with Bridgestone at Sepang?

“This year I have many responsibilities in my role as Safety Advisor, but the test at Sepang gave me the opportunity to continue the good work Bridgestone and I started at Valencia last November. Despite recent media comments that were wrongly attributed to me, Bridgestone and I have shared a long and positive relationship and in Malaysia we made our plans for the season and most importantly for this time, we discussed the 2012 specification tyres and how the riders’ are responding to them.”

How did the riders respond to the 2012 tyres?

“In my discussions with the riders, the general feeling is that the 2012 specification tyres are very good and they’re happy with the improved feeling they offer, which is important for the rider’s confidence. Also, the experimental front tyre that was tested in Sepang gave the riders an understanding of Bridgestone’s direction with development.”

As Safety Advisor to Dorna, what is the most important aspect of your work?

“I have many responsibilities in my new role and helping with tyres is just one part of this, but in everything I do the most important thing is I know how to speak the riders’ language. I was in the same position as them until just a couple of months ago so maybe there are some things they can explain to me that maybe they find it hard to explain to someone else. The riders respect me, so this puts me in a good position to offer advice on what they require. With the tyres, for sure I am very optimistic moving forward as Bridgestone and I are working very well together.”

Rossi and Hayden both undergo operations

Sebring: Round one GT race results