Bridgestone wraps up a successful first round of testing 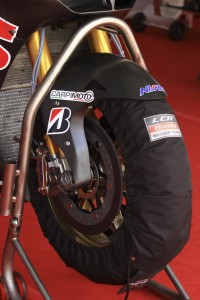 The first round of MotoGP testing for the 2012 season has been completed following the end of the first Sepang test with Bridgestone undertaking extensive assessment of its 2012 specification tyres.

Repsol Honda’s Casey Stoner was the fastest rider in Sepang, with his time of 1:59.606 – a second faster than the best time from the corresponding test in 2011 – proving that the combination of the new 1000cc machines and 2012 specification Bridgestone tyres is working well. Yamaha’s Jorge Lorenzo was overall second fastest ahead of Stoner’s stablemate Dani Pedrosa, the pair setting times of 2:00.198 and 2:00.256 respectively.

Bridgestone’s focus in Sepang was evaluation of both the 2012 spec tyres and the specially developed experimental front tyre, with the data acquired to be incorporated into Bridgestone’s ongoing MotoGP tyre development programme.

With track temperatures regularly soaring above 50°C, Sepang presented an opportunity to test the tyres for the upcoming MotoGP season in a vastly different environment from last November’s official group test in Valencia. Despite the different conditions, riders were happy with the feeling and warm-up characteristics the 2012 specification tyres delivered.

With the main technical aims for this year being improved warm-up performance and enhanced rider feel, the feedback on the tyres Bridgestone supplied to the private CRT test at Valencia (30-31 January) was also positive. The wider operating temperature range engineered into these tyres ensured optimum grip levels were achieved in quicker time, even though track temperatures in Spain did not exceed 17°C.

Bridgestone’s consultation with Loris Capirossi also continued at Sepang, with a working plan for 2012 put in place to ensure an ongoing focus on rider safety. The regular liaison with Dorna’s new Safety Advisor was valuable in developing a clearer picture of the overall rider opinion of the current crop of tyres.

Bridgestone now looks ahead to the next round of MotoGP tests and will supply tyres and technical engineers for both the private CRT test at Jerez on February 20-22 and the second Sepang test, from February 28-March 1.

“Our objective for the Sepang test was to evaluate how the 2012 specification tyres performed in the hottest temperatures possible, and in this respect we are very pleased with the feedback we received from riders in Malaysia.

“Our meetings with Dorna Safety Advisor Loris Capirossi were very productive and his experience with Bridgestone tyres and relationship with the riders are valuable in understanding the relationship between rider, bike and tyre. The presence of a Safety Advisor in MotoGP is a welcome addition and we will continue our collaboration with Loris throughout the year.

“The technical data and rider feedback we gathered during testing is of great importance to our MotoGP tyre development programme and I want to thank all the teams and riders for giving their valuable time in helping us achieve our objectives.”

“I am very happy to resume my collaboration with Bridgestone and look forward to working together throughout the season. Personally, I feel this was a very positive test and another step in the right direction after our last meeting in Valencia.

“In my discussions with riders, the general feeling is that the 2012 specification tyres are very good and they are happy with the feeling they offer. Also, the experimental front tyre helped give the riders an understanding of Bridgestone’s development direction.”