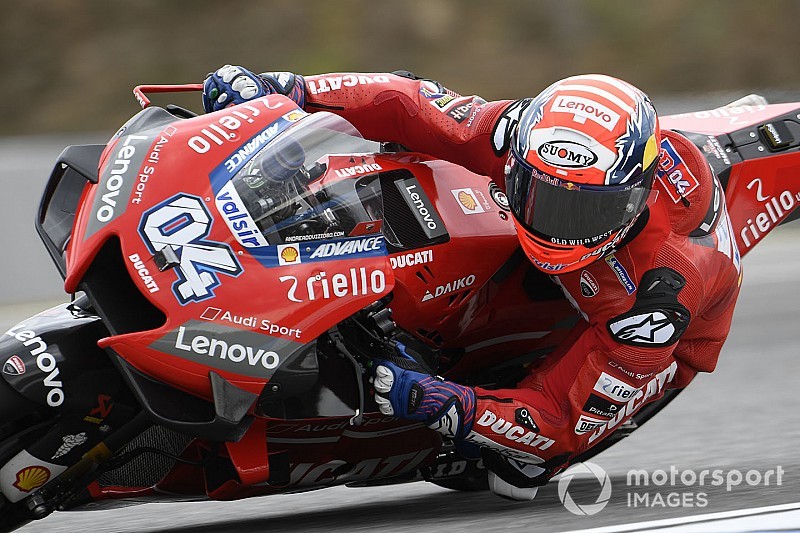 During the first dry session at Brno since Friday's second practice, most riders went out on the soft rear tyre to evaluate it as a race option.

Suzuki's Joan Mir set the early pace with a 1m57.958s, though was quickly beaten by the Petronas SRT Yamaha of Fabio Quartararo by three tenths of a second.

Quartararo's teammate Franco Morbidelli improved by a further two tenths to a 1m57.488s to depose the Frenchman.

His stint at the top of the timesheets was brief, however, as Dovizioso guided his Ducati to a 1m57.052s with 11 minutes remaining.

One of only two riders running the medium rear – along with Alex Rins on the second Suzuki – Dovizioso switched to the hard option for his second run. He used this to establish that new benchmark of 1m57.052s, which stood unopposed through to the chequered flag.

Vinales did threaten that time at the start of his final run, but the lap went away from him and ended up 0.037s adrift in second.

Jack Miller, who will start the race from second on the Pramac Ducati, completed the top three from 2016 Brno race winner Cal Crutchlow (LCR Honda) and Quartararo.

Poleman Marc Marquez was 0.349s down on Dovizioso in sixth, leading Mir and Morbidelli, with Rins and Aprilia's Aleix Espargaro rounding out the top 10.

Avintia's Tito Rabat was the only other rider along with Dovizioso to sample the hard rear tyre, and was 12th in the end ahead of works Ducati counterpart Danilo Petrucci.

Valentino Rossi was 0.831s off the pace in 19th after a low-key warm-up on the works Yamaha, while Johann Zarco – set to start third on the KTM – was 2.1s adrift of Dovizioso in 23rd.

Marquez, Rins called in by race direction over Brno incident