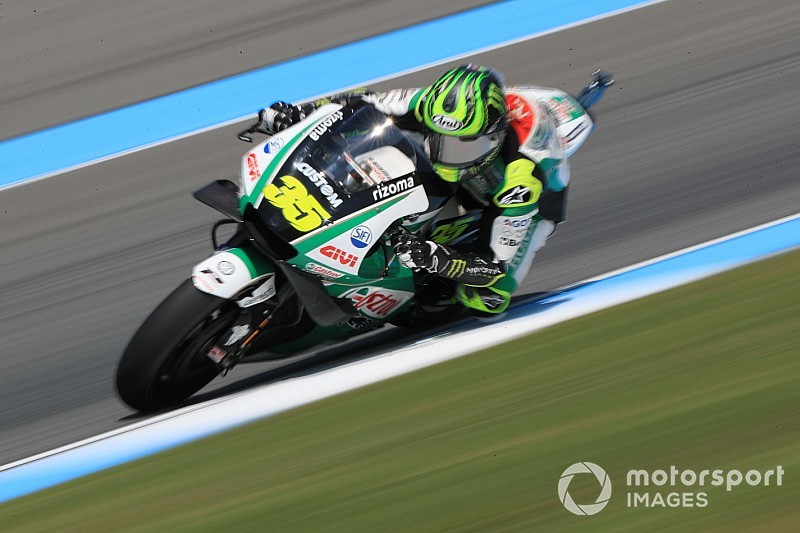 Cal Crutchlow says his subdued run to seventh in last weekend’s Thailand Grand Prix was down to him riding his Honda MotoGP bike “a bit wrong”.

The LCR rider could do no more than seventh, fading after a strong early part of the race in Buriram as he suffered with rear tyre wear.

But the Briton explained this was his own fault, as he had modified his riding style in a vain bid to try and save the tyre by not using the edge of the rubber as much as normal.

Crutchlow admitted this “destroyed” the centre of the tyre and left him powerless to defend himself against Maverick Vinales, Johann Zarco and Alex Rins in the second half of the race.

“I had fantastic grip at the start, but when I was behind them, all I was doing was picking the bike up to try to save the tyre,” recalled Crutchlow.

“Me trying to save the tyre, if you saw my riding style, I was picking the bike up really fast and trying to get the drive but I wrecked the centre of the tyre.

“I should’ve kept more lean angle and opened the throttle more on the side, which is the complete opposite way to ride a 300bhp bike. So I destroyed the rear tyre for that reason.

“I rode the bike a little bit wrong, trying to pick it up and get it out of the corner.”

Crutchlow said once his rear tyre was worn he switched his focus on simply getting to the end and banking valuable points in the independent riders’ title battle.

By beating ninth-placed Danilo Petrucci he has opened up a two-point lead over the Pramac Ducati rider, with whom he was tied heading into the Thailand race.

“When Zarco came past, I just said finish the race, because it was important to get the points,” said Crutchlow. “If I pushed, I wasn’t finishing the race.

“It was good to be up there again. Normally at the start of the race is where we struggle to be with them [the leaders], on a full tank, and we were right there.

“Normally I come on strong at the end of the race but here it wasn’t possible because of the rear tyre.”