Crutchlow, Michelin at odds over 'phone-sized' hole in tyre

LCR Honda rider Cal Crutchlow has questioned MotoGP tyre supplier Michelin's conclusions regarding a hole “the size of a mobile phone” in his rear tyre in Mugello. 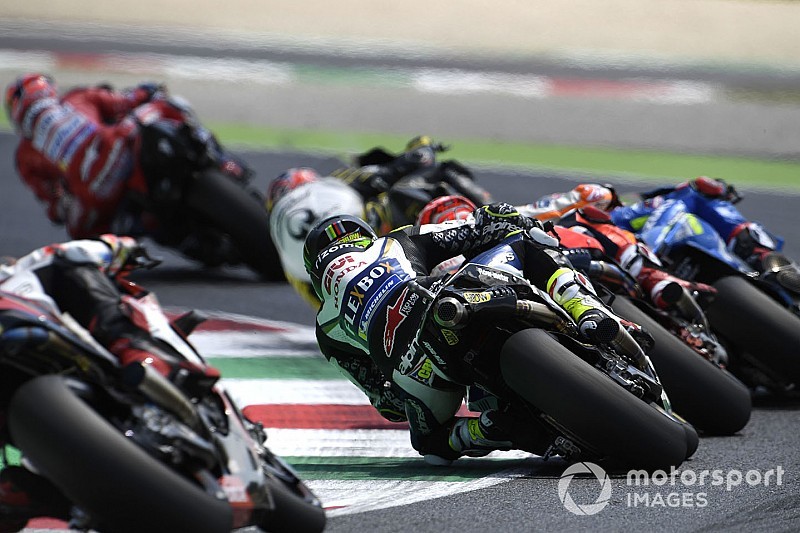 Crutchlow, who finished a distant eighth in the Italian Grand Prix, felt he had been hampered by damage to his medium rear tyre, which was then checked by Michelin in the aftermath of the race.

Speaking to media during the Spanish GP weekend in Barcelona, Michelin's MotoGP chief Piero Taramasso said the company's conclusion was that the damage to the rubber did not pose a threat.

“It's a big hole, there is not a safety issue because the structure is very strong,” Taramasso said. “We check the tyre, we didn't find anything strange.

“Safety we know is not a problem - we want to understand where it come from, so we analyse the tyre. We analysed the tyre from [Crutchlow's teammate Takaaki] Nakagami, because the serial number was just after the one from Cal.

"Also [Alex] Rins and [Danilo] Petrucci, they were the same serial number [series], we checked all the tyres, we didn't find anything strange coming from the tyre.”

Taramasso said the impact of the hole on the behaviour of the tyre was limited to “vibration”, but Crutchlow – who showcased a photo of the damage - was not satisfied with this conclusion.

“I told you after the race last time that I had a piece come out of the tyre, and they're analysing it, and it never happened to anybody,” he said in Barcelona.

“I think they do a good job. But now that they're basically denying that anything happened... As I showed you all the photo of the size of the hole that came out of the tyre, it was impossible to ride.

“I'd like to see anybody else want to ride down the straight 11 laps in a row and at 220mph with a hole the size of a mobile phone in the centre of the tyre. So of course it affected my race.”

Taramasso had theorised that the chunk could've been taken out by a piece of carbon or metal, or a stone.

“The piece that fell off, if we could get that piece, maybe we could find something metal, carbon, stone - but on the tyre we didn't see anything,” he said.

Crutchlow, for his part, was adamant he “didn't hit anything on the circuit”.

“I missed everything on the circuit, which was on the apexes,” he joked. “But, you know, this is typical of them, to deny anything.

"I never found anything, we see nothing on the data. But we see the hole in the tyre got worse and worse.”