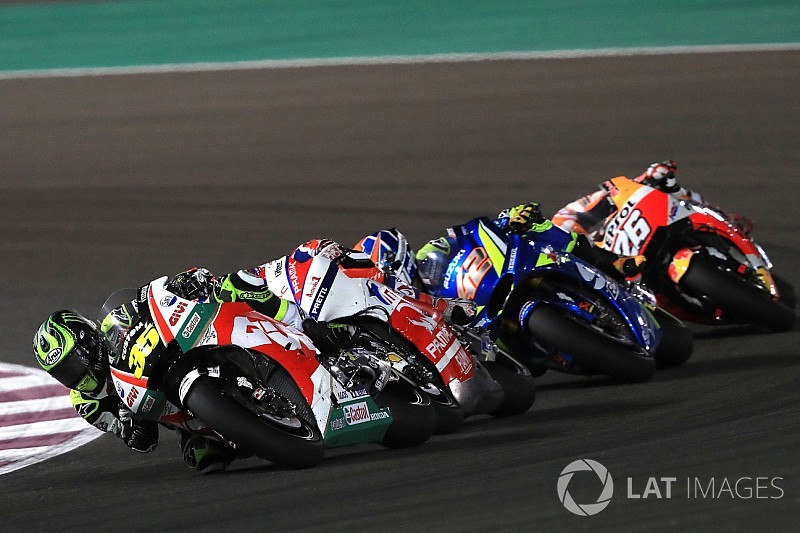 Cal Crutchlow has labelled MotoGP the “best motorsport event in the world” after a season-opening Qatar Grand Prix which featured an eight-rider battle for the podium for much of it.

The final few laps saw eventual race winner Dovizioso, Marc Marquez and Rossi break away from the rest, with Crutchlow a lonely fourth, several seconds ahead of the battle for fifth.

Crutchlow was able to catch a glimpse of the action he was involved in on the giant screens lining the track, and praised the efforts of Dorna in creating such a competitive championship.

“I could see myself in the middle and I could see three guys to the right in the pitlane exit bit,” he said. “And I was thinking, 'this must be good to watch for you lot.'

“But, in the end, a great start to the championship for many, many teams, riders and fans of the championship. We have to give credit to MotoGP as a whole, the rule system as well, because that's what gives us the close racing.

“A lot of different manufacturers up there, there's no one dominating as such, and that's credit to Carmelo [Ezpeleta, Dorna CEO] and the way they've done the rules.

“We have to say, we know that this is the best motorsport event in the world. Even Moto3 and Moto2 [has] great racing; Moto2 was strung out a little bit, but the battle was good.”

Crutchlow admits he felt he could have won on Sunday, but lost touch with Rossi – who finished just 0.797s from the victory - when he passed Zarco for third in the closing stages, and took too long in clearing the Tech 3 rider.

“I was sat in fifth place thinking I could win, but when the crunch came [it didn't work out],” he added.

“I was with Vale and I thought I could pass him, but I knew Vale was going to be there at the end, so I thought just sit pretty, sit comfortable, stay behind him.

“Then, the next lap I did a 1m55.6s, passing Zarco and trying to come across the gap [to the leaders], but they did a 1m55.2s because they were battling, pushing a lot.”