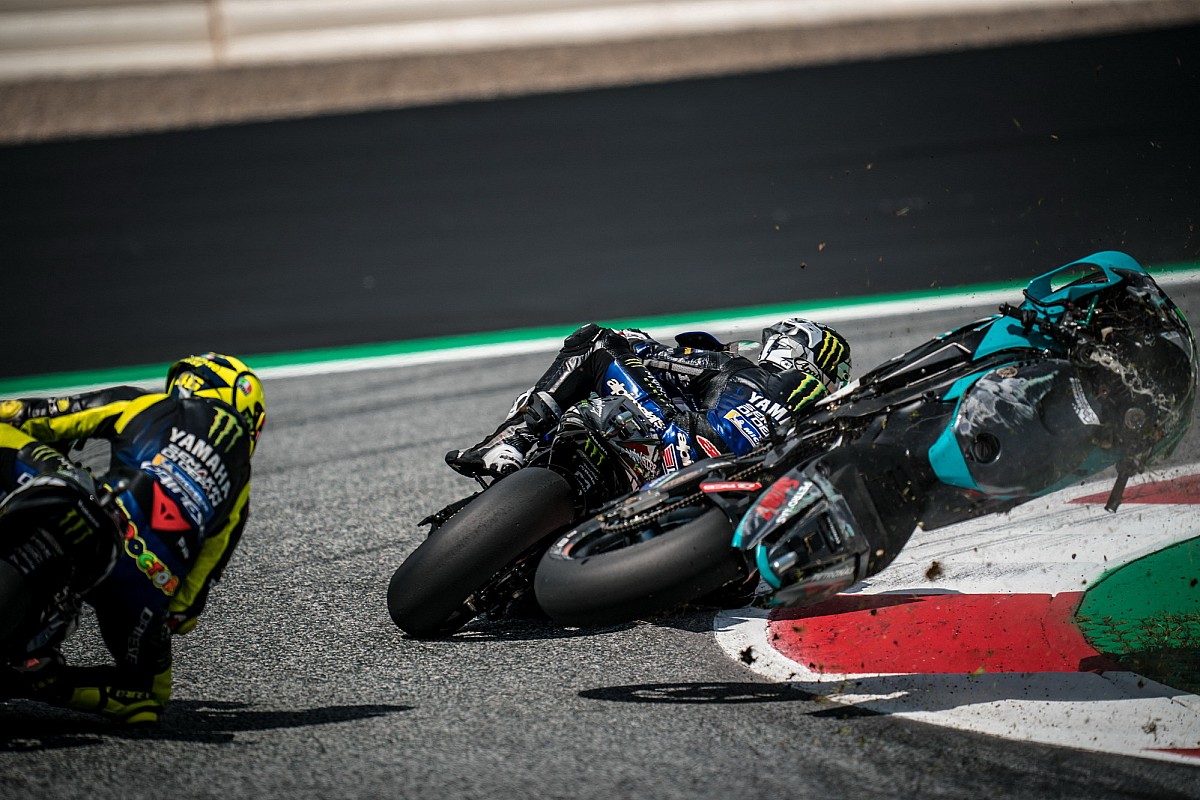 Morbidelli collided with Zarco on the run through the fast Turn 2 kink as the Avintia Ducati rider moved slightly off line under braking, with the pair sent hurtling into the gravel at horrifying speeds.

Morbidelli's errant Petronas Yamaha narrowly flew between Valentino Rossi and Maverick Vinales, while Zarco's demolished Ducati just missed the latter's head. The race was red-flagged while the track was cleaned, with the world feed showing replays of the incident several times – with the riders watching on in their garages.

Crutchlow says this practice needs to be reviewed in instances like this, as the riders "hate seeing it".

"As we saw, that bike went through a gap," Crutchlow said on Sunday. "We hate seeing it. I don't know why they play it 50 times, it's ridiculous.

The safety of the Red Bull Ring and the Turns 2 and 3 section where the incident occurred has been called into question by numerous riders.

Morbidelli's bike was able to slide into the path of other riders due to there being no catch fencing there, though Crutchlow says finding a solution for this is "no-win".

He added: "If you put a catch fence there, if you extend that catch fence, what happens if you run off track? The place is not safe. Unfortunately, there's no way around [the Turn 3 problem] because the riders would say [if] you extend that there and you make a mistake... imagine in the wet?

"Just running off the track there or something like that and you're alone in the practice, you can potentially go across the grass, go straight, whatever. But if you put something there you ride straight into it. We're in a no-win situation unfortunately in regards to that.

Race winner Andrea Dovizioso admits the nature of Turn 3 is dangerous, but believes the barrier on the outside on the run up needs to be moved further back as that's the biggest hazard.

"This kind of layout, if something happens, you can hit all the riders," he said. "So, for sure, it's not safe. But you can't do all the track always in the same way.

"To improve the safety, we already spoke in the safety commission, the wall on the left I think normally is a bit more dangerous [and needs to be moved]."

Aprilia's Aleix Espargaro explained that the wind and aerodynamics of modern MotoGP bikes makes the run through Turn 2 up to Turn 3 especially difficult.

"It's very difficult to know and one thing that I can say to you, when you are along on track the winds can help you a lot in that place because it helps you to turn at 325km/h and keep the front wheel on the ground," he said. "So when you are braking you have more downforce. Three, four years ago when the Aprilia had no wings, I remember we had knocking [on the front] there.

"This doesn't happen anymore, so this is because of the wings. But when you are following someone, the wings create turbulence. So with turbulence you have shaking, you can have open pads, you can lose the front.

"But it's very difficult place, a very dangerous place. We have talked about that in safety commission and today we had very bad luck because we saw how dangerous is this circuit. But we have to be happy that nothing happened [in terms of serious injury]."

KTM can develop engines if it loses MotoGP concessions