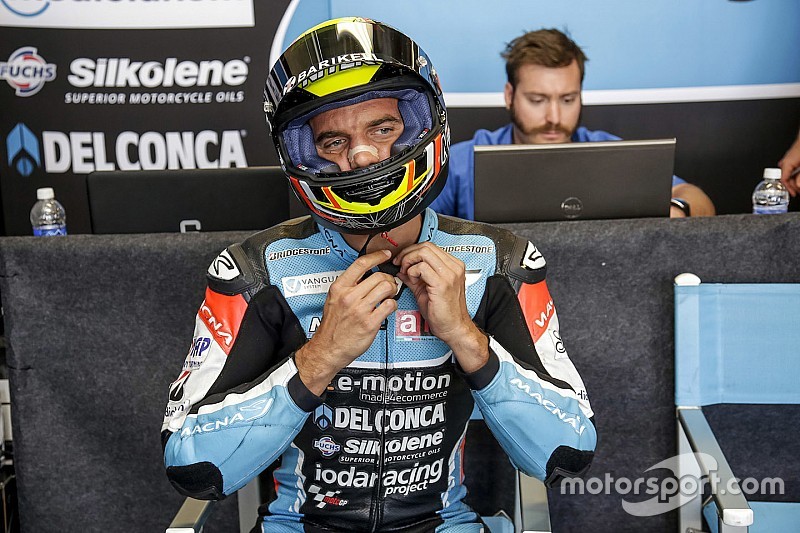 MotoGP rider Alex de Angelis has had his sedation reduced and is now able to talk as he recovers from a violent crash at last weekend's Motegi round.

De Angelis, 31, was initially diagnosed with a lung contusion and fractures to his vertebrae and ribs after the crash, which occurred during Saturday's FP4 session when he fell from his Ioda Racing ART machine at Turn 9.

Further checks at the Dokkyo Hospital in nearby Mibu, where the Sanmarinese was airlifted, revealed intracranial bleeding, which during a further neurosurgical evaluation was found to be unchanged.

Though he remains in a "critical condition", he has had his sedation reduced and is able to talk, and will be kept under evaluation in the coming days.

"On Monday, De Angelis had a head and chest CT scan, which reassuringly showed that the intracranial hematoma he suffered was unchanged while the contusions to his lungs are slightly resolving," read a statement on MotoGP.com.

"The rider remains in a critical condition but as his sedation was reduced, he was able to talk and oriented in time and space.

"He'll undergo a further head CT scan in the next 48 to 72 hours to ensure the intracranial hematoma is stable while the conditions of the lungs will need further evaluation."

The Ioda Racing team released a statement on Tuesday morning saying that, while de Angelis remains in a critical condition, he is now "alert and conscious."

"In the coming days it will be repeated the CT scan to monitor intracranial hematoma that did not present changes from its appearance two days ago," the statement continued.

Ioda team owner Giampiero Sacchi has stayed in Japan with de Angelis, raising the prospect that the team will not compete in this weekend's Australian Grand Prix.