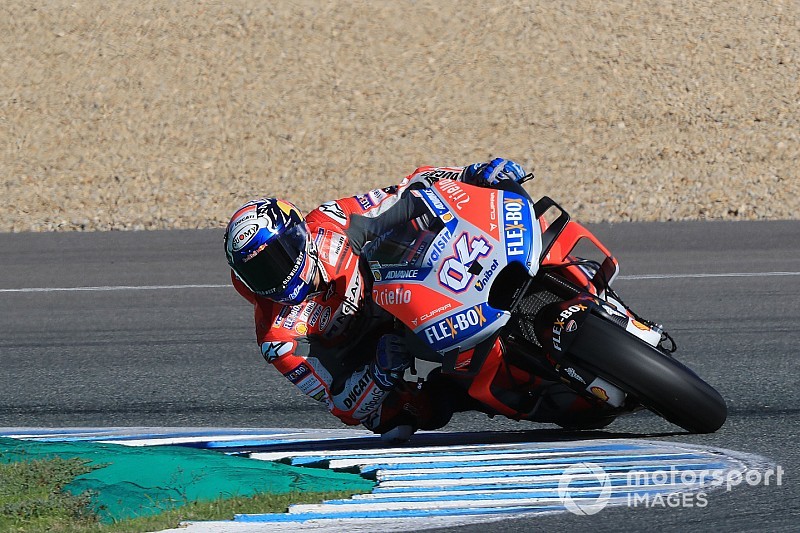 Andrea Dovizioso says he is in "big pain" after his crash during the first day of the Jerez post-season MotoGP test and isn't certain of riding on Thursday.

But the Italian's day ended early with a crash at Turn 5, and while an x-ray revealed he hadn't broken any bones, he suffered swelling around the base of his left thumb.

"I have big pain, but looks like there is not anything bad, that is the most important thing," said Dovizioso.

"I did an x-ray but they couldn’t see anything [broken], but you never know – maybe there is a muscle or something, but nothing bad.

"If tomorrow [the pain] will be acceptable I will continue to test. We have something to compare. I hope I have a chance to do that."

Explaining the crash itself, he added: "I was pushing, I wanted to improve the laptime.

"In that moment I had the experimental rear Michelin, already some riders did a laptime with that and it worked well, and we changed the set-up. We did a big step in one way, we wanted to understand.

"I tried with a used tyre, the feeling was good on the front also if the laptime wasn’t so good, and I wanted to push with a new tyre to really put the bike on the limit. That was very important for us.

"But I was too fast in the middle of the corner. That set-up didn’t work as well as my previous one in that moment. I was pushing really hard and I lost the front.

"Small crash, but when I arrive to the gravel I start to roll. I hit a lot of parts of my body."

Rossi warns '19 Yamaha "not the improvement we need"