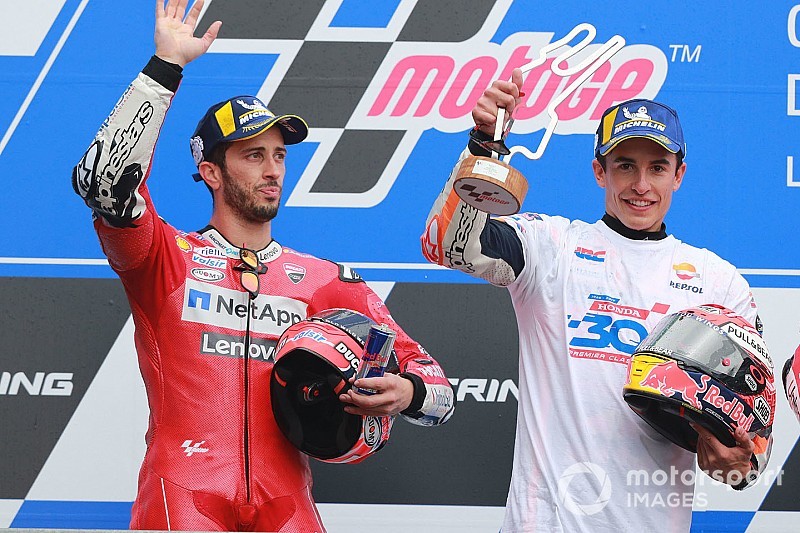 Dovizioso won the season opener in Qatar but was unable to compete with Honda rider Marquez at the next four venues, with the reigning champion taking a trio of dominant wins.

It would've likely been four had he not crashed out of a comfortable lead in Austin, which is why Marquez's championship lead is now only eight points over Dovizioso, who has finished every race in the top four.

The next two races on the calendar will be Mugello and Barcelona, two circuits which are strong for Ducati and are among Marquez's weaker tracks.

But Dovizioso said that even winning in these two tracks won't be enough against Marquez and that they need to find a way to stay close to him in the championship even when the Honda rider doesn't crash.

"They [Mugello and Barcelona] will be very important because can be good tracks for us but this is not the point," said Dovizioso.

"I don't think that will decide the championship. There is a lot of points still and we have to find something.

"If we are able to improve a little bit, we have a chance to fight. If you don't have a chance, you can just pray to the other rider can make a mistake - this is not the way to win the championship.

"For sure we will be competitive in Mugello and to go there with three good results from Ducati, 2-3-4 [in Le Mans] is really positive but we have to find something."

When asked where he and the Ducati Desmosedici package need to improve, Dovizioso didn't go into specifics.

"We need speed," he said. "When you have speed you are able to manage a lot of things. When you are also just two tenths slower, everything becomes a problem.

"Every rider and bike have different characteristic, but for me the important thing is speed. In which part of corner, not too important."