Andrea Dovizioso believes the early DNFs that wrecked his MotoGP title challenge in 2018 were key to allowing Ducati to become so competitive towards the end of the year.

After taking his 2017 championship battle with Marc Marquez down to the wire, Dovizioso dropped out of realistic title contention in the first half of 2018 with crashes in Jerez, Le Mans and Barcelona.

He finally conceded this year's crown to Honda man Marquez with another crash late in the season at Motegi.

Besides that, and a low-key run to sixth in Malaysia, Dovizioso was never off the podium from August's Brno race onwards - and believes that falling so far back in the points early in the year allowed Ducati to make a step it may not otherwise have made.

“I want to look at this season in a positive way, without putting too much stress on the negatives, because in my opinion everything that happened this year has allowed us to become competitive,” the Italian reflected.

“This year, even if we had done everything right, it would have been hard to beat Marc and Honda. When your opponents are stronger, you have to admit it. We know who we are fighting against.

“This year we surely could have done better, avoiding some of the zeroes, but without this maybe we would not have become competitive as we are today.

“When we went down, this gave us the chance to take another road and become truly competitive. It’s normal that there may be some regrets, but I prefer not to think about this too much.”

Dovizioso described post-season testing in Valencia and Jerez as the "best" of his Ducati tenure so far and hailed the GP19 bike's "very good base".

But the 32-year-old admitted his team was not in perfect shape at the start of 2018, despite winning the Qatar opener.

“Consistency has always been my strong point, it’s not something I need to work on much,” Dovizioso said.

“This year it was missing because we did not have things in place at the start of the year and we made some mistakes, which made us finish very far behind in the championship.

“But this made us come back like never before and it’s a thing that makes me proud of all the guys that work with us.” 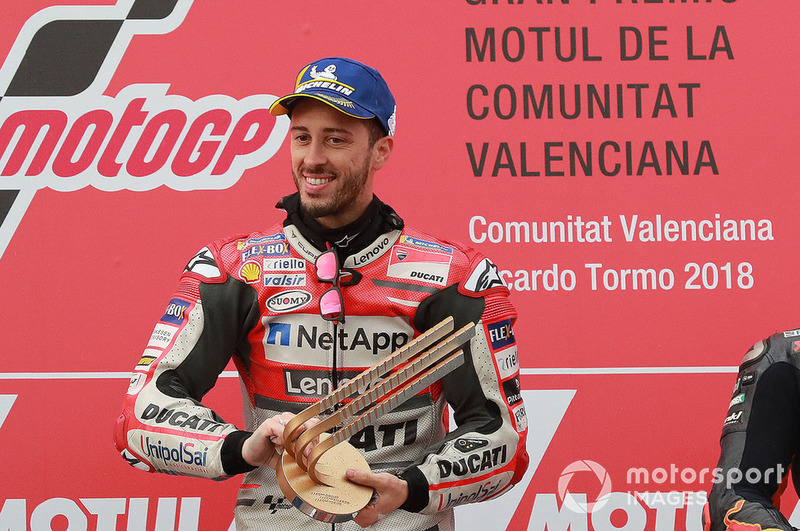