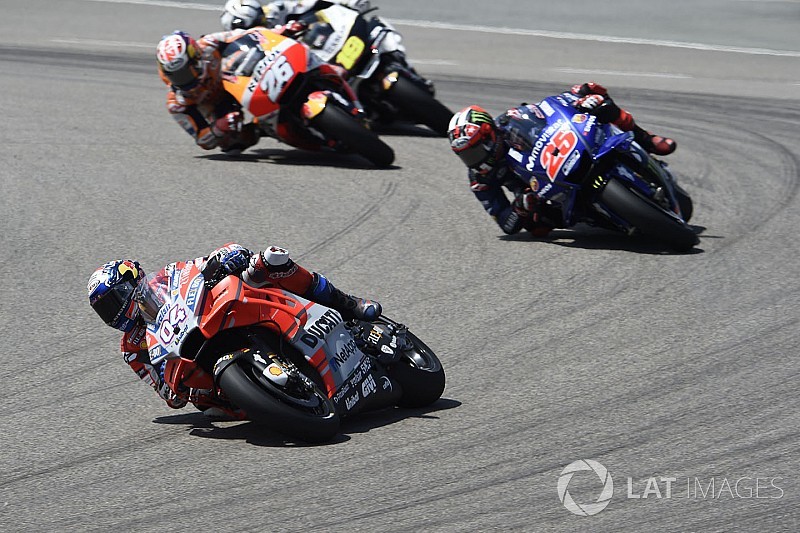 Andrea Dovizioso is more focused on trying to catch up to the factory Yamahas in the MotoGP standings, rather than fighting with Marc Marquez for the title.

Dovizioso, reigning champion Marquez's biggest rival in 2017, ended the first half of the season 77 points behind the Honda rider.

The 32-year-old, who won the season opener in Qatar but only stood on the podium once ever since, is also behind the factory Yamahas of Valentino Rossi and Maverick Vinales.

His deficit to them is 31 and 21 points respectively, and the Italian says he is currently more worried about catching the Yamaha pair than about runaway leader Marquez.

"[The gap to Marquez] is a lot but I am more worried about the gap I have with Yamaha in this moment, not Marc," said Dovizioso.

"We have to improve still what the points [are] where we're not good enough, because until you're not okay, you can't fight with Valentino, Maverick and some other riders.

"We were focused on that and this track and this weekend, it wasn't the perfect track to try and work on that."

Sat more than three race wins worth of points behind Marquez, Dovizioso admits "there isn't any reason" to focus on the title fight.

"Already before the race [at Sachsenring], I didn't think about Marc. Marc did the right thing in many races and he created a big gap.

"The difference between our speed compared to Marc is very small, so this is a positive. I'm not worried about that.

Ducati endured a low-key race at the Sachsenring last year but fourth-placed Pramac rider Danilo Petrucci finished less than four seconds behind Marquez in the 2018 event.

"I think we confirm, we show everybody our bike is better than last year in this track, but we didn't make any jump forward in the right way for this [atypical] not-a-track," Dovizioso said.

"From Brno I think we can be very competitive and we have to keep working and improve a few things.

"We are in the group - if we want to really fight on top, we have to be a bit better."