MotoGP championship leader Andrea Dovizioso believes rivals Alex Rins and Valentino Rossi can remain in the MotoGP title hunt “until the end” in 2019. 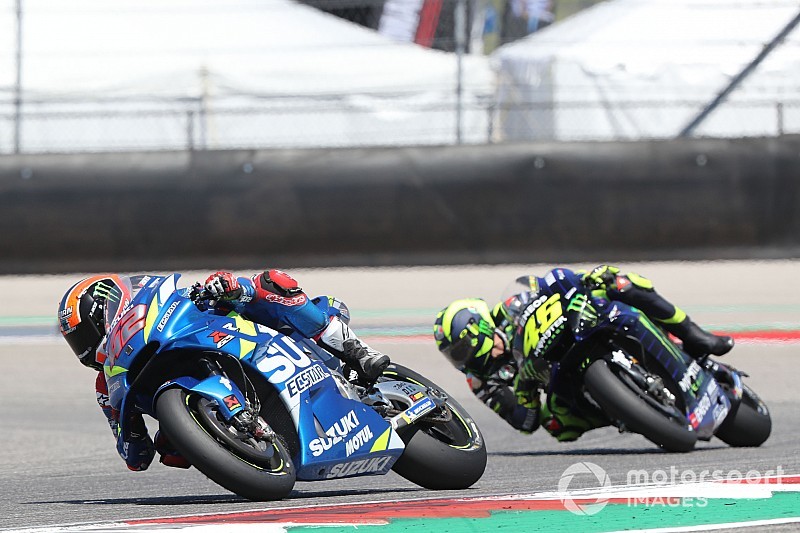 Dovizioso was the only rider to put up a season-long challenge against Marc Marquez in the past two seasons, as the Honda man secured his fourth and fifth premier-class crowns.

Marquez's shock crash at COTA leaves him nine points behind Ducati rider Dovizioso, but both Austin winner Rins and second-place finisher Rossi have slotted in between the pair in the standings.

Rossi's Yamaha team hasn't been a match for Honda and Ducati as of late, while Rins' employer Suzuki hasn't won the premier-class title since 2000, but Dovizioso believes both bikes are now strong enough to keep the pair in the hunt.

“The difference is there are more competitive bikes than last year,” Dovizioso said. “Suzuki definitely took a step forward, even though last year in the last races they already made a good series of podiums.

“Rins has made a step in terms of maturity and Valentino has remade himself along with the level of his bike, so I think both can be in the championship fight until the end.”

Rossi, however, has not won a race since the 2017 Dutch TT at Assen, and Dovizioso asserts that “you can't win a championship without winning races”.

“I think you have to win at least three or four, even if it’s all very even, but I believe winning counts less than certain results.”

Dovizioso believes having more riders with title aspirations “can be both positive and negative” for his hopes of scoring Ducati's first premier-class championship since Casey Stoner in 2007.

“In the last two years we could never beat Marc, because on the bad days [for him] he always managed to be on the podium," he said. "However, we were in a bad way when we struggled and this limited our results.

“This year I think that we are stronger and can be more consistent, as we showed in Argentina and in Texas.

“It’s true that there are more competitive riders, so even staying in the top 10 in qualifying is difficult. It’s surely a difficult situation, but it’s the same for the others, so it’s something we must see weekend by weekend.”