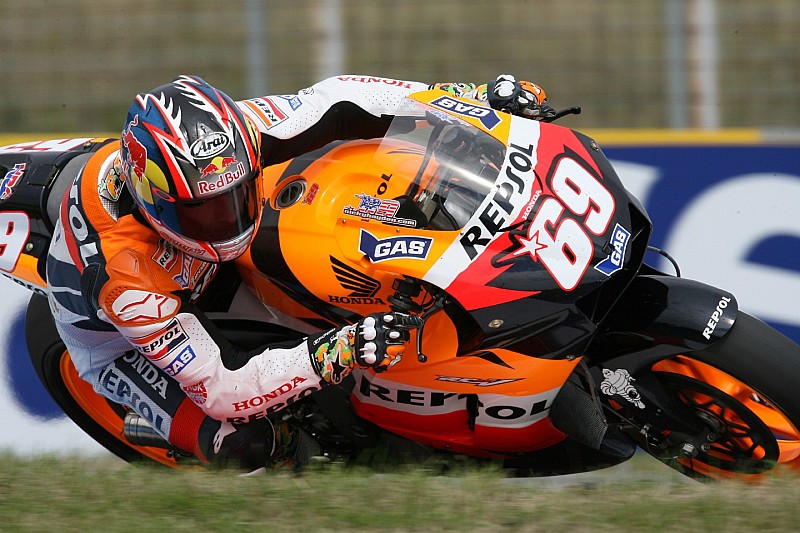 Hayden, who was killed earlier this year in a cycling accident, claimed an against-the-odds premier class crown 11 years ago, coming out on top against Valentino Rossi in the final race of the year at Valencia.

It's a situation that Marquez likens to his own battle against Ducati's Dovizioso, who before 2017 had won only two MotoGP races but has taken five victories this season in a breakthrough campaign.

The Honda rider admits that, much like Hayden's 2006 charge, a potential Dovizioso title win would be popular throughout the grand prix paddock.

“I look after my fans and my team, who will always support me until the end," said Marquez. "But if Dovi wins the title, everyone would celebrate it.

"He's had a long career, he's worked hard and deserves it: he has the level to clinch it.

"It reminds me of Hayden in 2006, when everyone thought Rossi would win it and finally it was Hayden who did it."

Marquez's lead over Dovizioso was cut to 11 points in their frenetic Motegi battle last weekend, which was won by the Ducati rider after a thrilling wet-weather dice.

But Marquez says he had expected to concede ground to Dovizioso at the Japanese track, and equally has Phillip Island earmarked as a venue where he needs to rebuild his advantage.

“At Motegi I had clear in mind that I could lose some points," he admitted. "What I’ve planned out here is to end up in front of him. However, that means more pressure on my shoulders, I won't lie.

"This result would be better for me because in Malaysia the Ducati bike is very fast."

The Spaniard also said he expects Ducati to employ team orders to support Dovizioso's title bid, but isn't counting on any help from his own Honda stablemates to defeat the Italian.

“Ducati will use team orders because it is a factory and there's a championship at stake," said Marquez. "I depend on myself and I don't want to depend on anyone.”