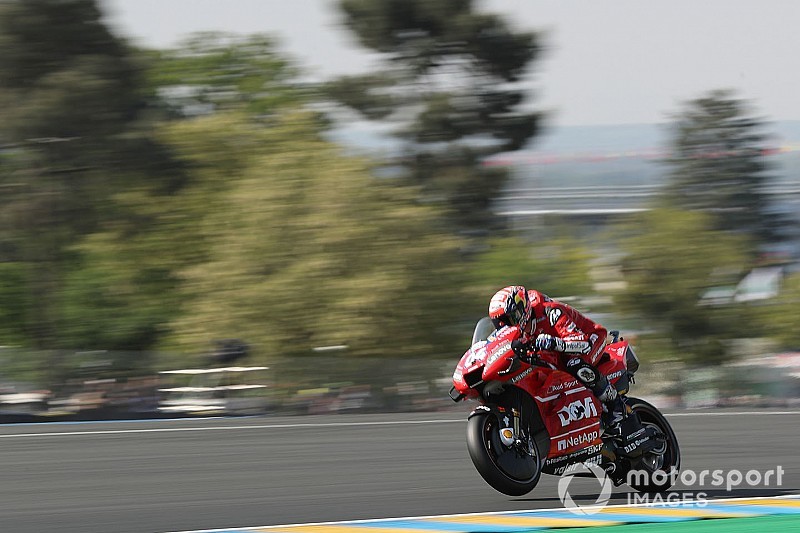 Ducati MotoGP rider Andrea Dovizioso said he was not riding in a perfect way on the opening day at Le Mans, admitting he was "too aggressive".

Dovizioso was in the top five in both FP1 and FP2, ending the day fifth fastest overall, and the Italian was confident that he will be in podium and victory contention on Sunday.

However he admitted that his riding style on Friday was not perfect for the Le Mans circuit, and said that he will need to be smoother for the rest of the weekend.

"We are in the top group but we are not the fastest," said Dovizioso. "We have still to improve because the feeling was not perfect, [but] the speed was there.

"I was a bit too aggressive, Le Mans is very tight and slow track, with the MotoGP bike is not easy to be perfect, smooth and use the best potential of the bike, is easy to use too much power, spinning.

"I wasn't comfortable, 100%. It is small thing, we are not working on big things.

"I wasn't smooth enough and we have to find something on the setup and give the possibility to ride better.

"I have to ride a bit better but we are not too far and we are still there and have a chance to really fight for the podium and victory but we need something more from today.

"If we work in a right way I think we have a chance. We are a bit closer but like we expected this season, some competitors are stronger than last year."

Dovizioso's teammate Danilo Petrucci was right behind in sixth, but he started FP2 with a crash as his GP19 bizarrely folded under him on the kerbs as he exited Turn 8.

Petrucci explained that that specific part of the circuit is "critical" because acceleration happens during a small turn on the straight.

Still, he admitted that his accident was "strange": "On this corner the track is going downhill and on acceleration is going uphill.

"The problem is that the straight is not perfectly straight and with MotoGP you exit from that corner and the bike starts to wheelie and [I] maybe started to wheelie with a little bit of lean angle.

"Maybe this afternoon the track was not so perfect we saw also from the crash, but maybe also the kerb was very cold.

"When I hit the kerb I immediately lost the front on acceleration when I was completely on the straight.

"It is a critical part and I discover that the ground is very hard in that part."