Andrea Dovizioso believes his shot at Red Bull Ring MotoGP victory was compromised by him using up his rear tyre “too much” while trying to pass Ducati teammate Jorge Lorenzo.

An aggressive move from Marc Marquez at Turn 3 on the opening lap relegated Dovizioso behind Lorenzo, with the Ducati pair left to chase after Honda's championship leader.

As Marquez stretched out an initial one-second advantage, Dovizioso looked to have the edge on Lorenzo and thus spent several laps right in his wheeltracks.

But the Spaniard held firm in second and, as when they reeled in Marquez, it was Lorenzo who could take the fight to the reigning champion and ultimately emerge victorious – whereas Dovizioso soon ran wide at Turn 1 and couldn't recover, settling for third.

Speaking after the race, Dovizioso said he wasn't sure about his choice of medium front and rear tyre compounds for the race – as opposed to soft-soft for Lorenzo – but also admitted he wore out the rear tyre behind his teammate.

“I was faster in that part of the race but I couldn't really prepare in the best way, the overtaking.

“That cost me for sure because I have to slow down too early. Ten laps till the end, I did a small mistake but already I was in trouble with the right side on the rear tyre.” 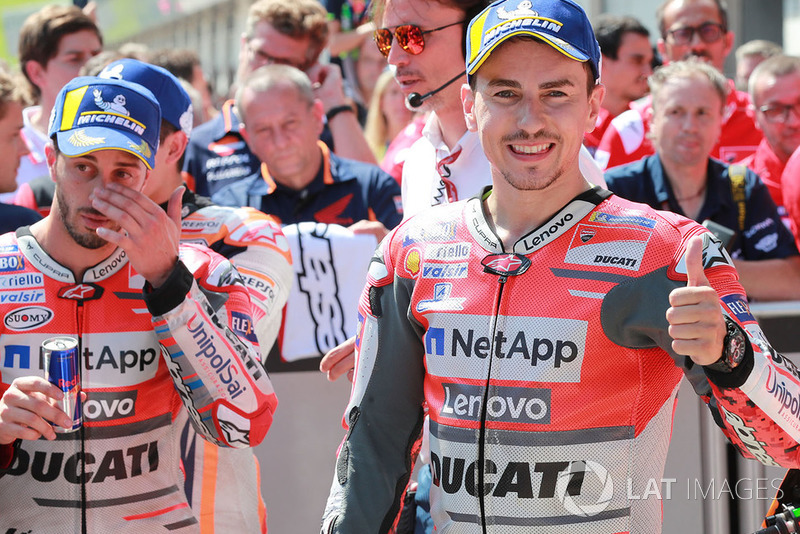 Dovizioso said he was concerned by Marquez's initial breakaway attempt before realising the Honda rider didn't have superior pace.

“At the beginning I was a little bit worried because I didn't expect [it]. But after seven-eight laps I understood he didn't have a better speed than us.

“So I was focused on Jorge. Not on Marc.

“I think if I was able to overtake Jorge, my race [would] change a little bit. But we never know.”

As Lorenzo and Marquez scrapped for victory, Dovizioso began to close back in on the pair – but the Italian's Turn 1 off ultimately proved too significant to make up for.

“Because the drop of the rear tyre, was for me very difficult to exit on the corner in three corners, and I lose too much.”