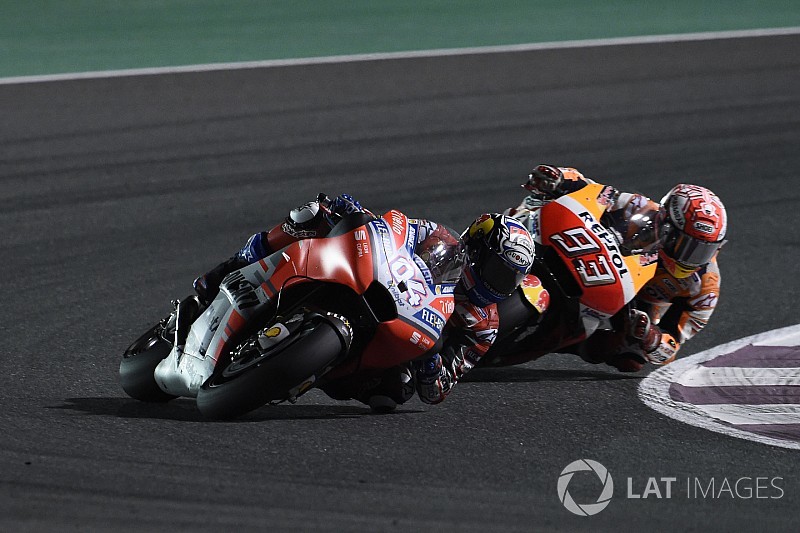 Ducati MotoGP team manager Davide Tardozzi says Andrea Dovizioso is “worried” about Honda rival Marc Marquez's performance in the season opener in Qatar, despite having beaten him to victory.

After three consecutive runner-up finishes at the track, Dovizioso withstood a final-corner lunge from Marquez to finally claim his first Qatar win.

But the reigning champion was clearly delighted with the race despite the defeat, as he came up just 0.027s short at a track that has not favoured his Honda bike in the recent years.

“Dovi is worried about Marc,” Tardozzi said, “because this is a track more for Ducati and not for Honda, but Marc was there [in the victory fight].

“Then I said 'he is world champion and he demonstrated today, too'. All the respect from Dovi to Marc because he knows that he [Marquez] is the guy to beat.”

Dovizioso came out on top in similar last-lap duels with Marquez twice last year, at the Red Bull Ring and Motegi.

However, at both of those circuits favoured Ducati over Honda, and it was Marquez who in the end beat the Italian to the 2017 riders' title.

Speaking in the Qatar post-race press conference, Dovizioso admitted he did not expect to be left fighting with Marquez on the final lap again – and said the Spaniard “did something unreal to stay with me with that laptime”.

Asked whether his rival's Qatar performance was a worry, he said: “Yes, I think [it] is the reality.

“I think we confirm we are more competitive than last year but this race I think Honda riders also confirm they are better than last year.

“When I was able to beat him, looks like an important thing, but it's not in his good track. So it is really positive but you have to be objective, I know very well these things."

Dovizioso added: “I didn't expect to have him [fighting me] in the last few laps. That is the bad thing of the victory of today.

“I expected to finish alone but not with Marc.”